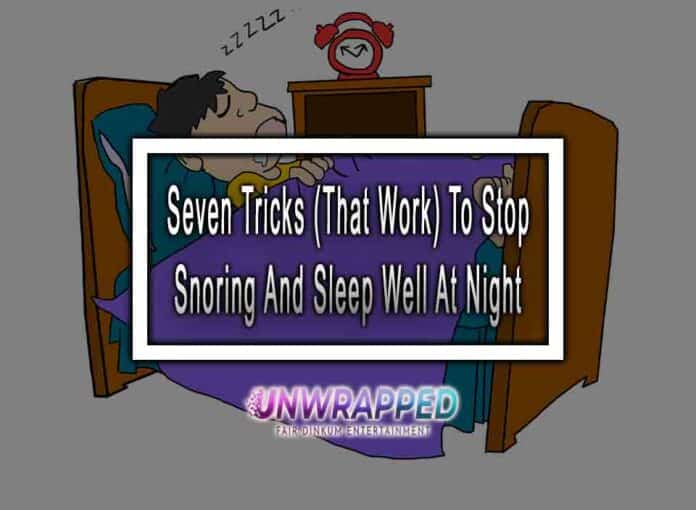 Snoring has become one of the most annoying sleep habits. We uncover several efficient strategies to prevent snoring after excluding linked disorders.

The World Health Organization (WHO) estimates that around 40% of the population sleeps badly. Although difficulties falling or staying asleep at night are normal, there is a disease that keeps you from sleeping soundly more often than we think. We’re talking about snoring, that irritating noise that makes it impossible for the emitter, as well as his or her family or night companions, to sleep.

Snoring is a sound that happens when there is a partial blockage in the movement of air. This obstruction begins at the back of the mouth and nose, causing the soft palate and uvula to vibrate, producing the unpleasant noise.

Although many people assume that snoring is just a problem for males (between 30 and 50 percent of men snore), it may also affect women, particularly after menopause, and even children (approximately 10 percent of children snore).

Causes That Lead A Person To Snore

According to specialists, snoring may be either infrequent, caused by certain conditions or postures, or persistent, in which case a professional evaluation is required to rule out issues such as sleep apnea, a prevalent sleep disease. While sleeping, breathing interruptions occur, preventing air from reaching the lungs.

Being overweight, using alcohol or drugs, a simple cold that congests the nose, a certain posture, and even an unstructured bone or anatomical structure are all factors that might cause a person to snore.

Colds, pleasure, or even nasal debris might cause us to snore when we sleep. As a result, clearing the channels is recommended, either with serum or with commercially available salt water sprays.

Try To Sleep On Your Side:

The greatest sleeping posture, according to study, is on your side, which also helps to reduce snoring. Sleeping on your back, on the other hand, promotes tongue blockage of the respiratory tract. If you can’t sleep on your side, raise your head by tilting the bed.

Snoring is caused by a variety of factors, one of which is being overweight. Excess weight may expand the volume of the neck, putting more strain on the airways.

Because dry conditions may irritate our throats, utilizing a humidifier to provide moisture to the air can help hydrate the mucous membranes, enabling air to enter and depart freely and without producing vibrations.

It’s critical to keep hydrated throughout the day; in fact, authorities suggest drinking at least two liters of water every day. However, it will also help to avoid the creation of mucus and phlegm.

Avoid The Consumption Of Alcohol and Tobacco:

Despite the fact that it is preferable to eradicate these harmful habits from our life, it is important to avoid them at least before going to bed. While smoke irritates the throat and promotes the onset of respiratory issues, alcohol relaxes the muscles excessively, which may lead to snoring.

Exercise Your Throat and Tongue:

According to several studies, snoring is caused by excessively relaxed muscles in the throat and tongue. As a result, experts urge that you exercise them, and singing is one of the most effective and easiest methods to do so.

Also see: Six Signs That Indicate That Your Diet Is Not Good

Stay Connected
41,936FansLike
5,684FollowersFollow
867FollowersFollow
Previous article
Six Signs That Indicate That Your Diet Is Not Good
Next article
Diabetes: What Are The Types And How To Prevent It?

Spring Asthenia: What It Is And How To Combat The Tiredness...

Learn About Ayurveda, The Science of Balance

The 6 Most Frequent Mistakes When Brushing Your Teeth That You...