How Do Psychologists Decide What Is Abnormal? 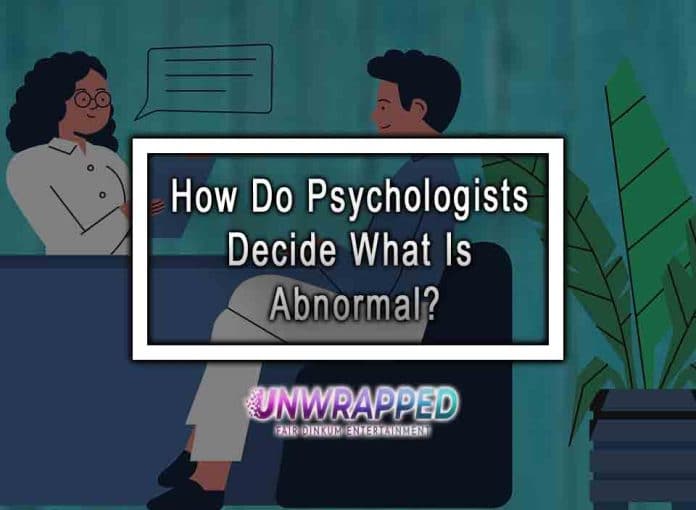 Abnormal behavior can be divided into two categories: mild and severe. Mild abnormalities indicate that a person is showing signs of abnormality that do not interfere with the person’s ability to function in society. Severe abnormalities are ones affecting the person so much that they pose serious risks to their mental and physical health. In this article, we are going to explore how psychologists decide what is abnormal.

What Is Abnormal Psychology?

The field has been around for a long time; its roots date back to ancient Greek philosophy and philosophy in general has had an impact on how we understand “normality.” The term “abnormal” was first used by German psychiatrist Emil Kraepelin in 1856 as part of his classification system for mental disorders.

Abnormal psychology is important because it allows us to better understand human behavior. It helps us avoid making assumptions about people’s mental health and gain a deeper understanding of the social, biological, cultural and economic factors that influence their behaviors. Abnormal psychology also helps psychologists build effective treatment plans for those suffering from mental illnesses by providing risk factors for various disorders or illnesses.

Psychologists Use a Number of Different Tools to Identify Mental Illness.

Before you can be diagnosed with a mental illness, psychologists must first identify what is considered abnormal. This process involves several different tools and methods, including the DSM-5, the Structured Clinical Interview for the DSM (SCID), and the Minnesota Multiphasic Personality Inventory (MMPI).

In order to decide what is abnormal or not, psychologists use a set of criteria that they have agreed upon as being indicative of certain disorders or other issues. These criteria are found in publications such as the Diagnostic and Statistical Manual of Mental Disorders (DSM) or The International Classification of Diseases 10th Revision (ICD-10). Psychologists may also use specific assessment tools such as questionnaires or interviews with patients to determine their condition before making a diagnosis.

The DSM-5 and the Process of Diagnosis

The Diagnostic and Statistical Manual of Mental Disorders, Fifth Edition (DSM-5) is a handbook that psychologists use to diagnose mental illnesses. It lists symptoms that are indicative of different mental illnesses, and it also provides information on how to treat each illness. The DSM-5 has been around since 2013, but the process by which it was created was much longer and more complex than you might think.

The first edition of the DSM was published in 1952; its creators intended for it to be used as an aid for psychiatrists when diagnosing patients with various disorders. Since then, there have been five subsequent editions: DSM I (1952), DSM II (1968), DSM III (1980), DSM IV (1994) and now the most recent version—the first major change since 1994—which came out in 2013 as a result of years’ worth of research done by experts across many different fields such as psychiatry, psychology and neurology among others

In order to understand abnormal psychology, we must first define what normal is. There are many ways that psychologists can do this and they’ve done it by defining statistical comparison:

A psychologist might use different methods to diagnose a patient. One method might be to use a psychological evaluation, which is an assessment of a patient’s mental state. This can be done through interviews, questionnaires, and tests. Another method might be to observe the patient’s behavior. This can be done through naturalistic observation or case studies.

Check This: Books Written by Successful People Who Have Mental Health Issues

5 Ways Psychologists Decide What Is Abnormal

In order to determine whether or not a person is experiencing symptoms of mental illness, psychologists will use a number of different tools. These tools are as follows:

An example of an abnormal behavior is maladaptive behavior, which is a behavior that does not work for the person or for others. Maladaptive behaviors can be harmful to the person, such as drug use, or it can be harmful to others, such as physical abuse. Some people think that abnormal behavior is just a “bad” thing to do and it should be punished; however, this type of thinking ignores the fact that there might be some underlying reason why someone behaves in this way.

Emotional distress is an umbrella term for feelings of anxiety, sadness and other negative emotions. If you feel that your emotional state has interfered with your everyday life for at least two weeks, then you may be experiencing emotional distress. Emotional distress is not the same as depression; although symptoms of both can overlap and the two are often diagnosed together in clinical practice (i.e., major depressive disorder with comorbid personality disorder), they are distinct disorders.

Emotional distress can be caused by a number of different things: stress at work or home; physical pain; grief over losing a loved one; side effects from medication; substance abuse (either overuse or withdrawal); eating disorders such as anorexia nervosa or bulimia nervosa; post-traumatic stress disorder (PTSD) resulting from a traumatic event such as domestic violence or sexual assault–and so on.

When psychologists discuss social norms, they’re referring to our shared ideas about what’s acceptable behavior and what isn’t. When someone violates a social norm, it’s usually considered abnormal because breaking the law or not following dress codes are behaviors that are clearly outside of what we consider normal. But there are times when violating a social norm can indicate mental illness—if you’re late for work every day despite being on time all your life, or if you start dressing inappropriately after never caring before.

In other words: Psychologists don’t use this criterion as an absolute rule when deciding if someone is mentally ill; rather, they look at how violations might affect the person’s ability to function in society and function properly in their own lives

Deviance is behavior that is not accepted by society. It is not necessarily abnormal, nor is it necessarily a symptom of a mental illness or disorder. Deviance can be the result of normal development, or the result of other factors (such as an individual’s cultural background) that are not indicative of a problem with their psychological functioning.

There is no definitive answer to this question as it largely depends on the individual psychologist’s opinion and professional judgement. However, there are certain criteria that are generally used in order to determine whether or not a person’s behavior or mental state is considered to be abnormal. These include whether or not the behavior deviates from what is considered to be ‘normal’ or ‘average’, whether it is causing the individual distress or impairment, and whether it is harmful to themselves or others.

To conclude, a psychologist utilizes specific tests and diagnostic methods to determine if a client is suffering from a mental disorder or not. We hope this blog has helped to give you a better understanding of how psychologists decide what is abnormal.

Must See: Mental Health Vs Mental Illness: How Do They Differ?