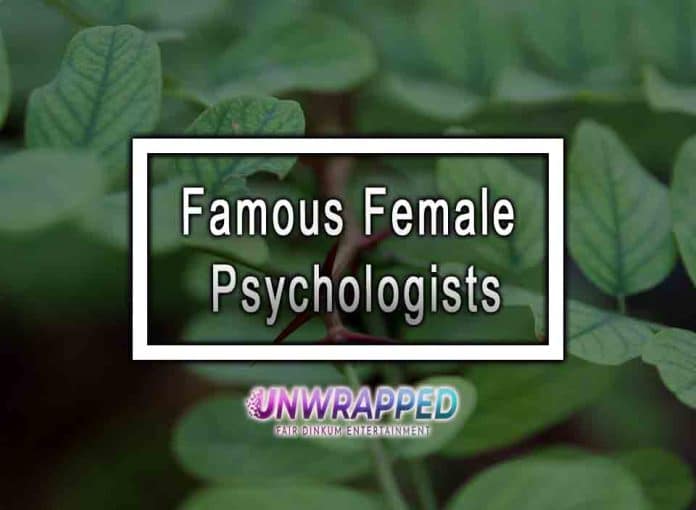 This is an exhaustive list of renowned female psychologists. These are women that have conquered a lot in this field. We will be talking about some of these women in this article.

These are some of the famous women in psychology.

Marie Jahoda was an amazing psychologist; She conducted different studies as a psychologist. One of her most important study was racial prejudice. She also pioneered studies on authoritarian personality and the theory of positive mental health.

Furthermore, Marie Jahoda, together with her first husband(Paul Lazarsfeld)  carried out an outstanding research on the psychological effect of being unemployed. This duo also came together in 1933 to conduct a research on the topic, ‘Marienthal; It was based on the social structure of a community known for unemployment.

Marie Jahoda was given different accolades for her research and the outstanding contributions that she made to psychology. In 1979, she was given an away for contributing to psychology in public interest. This award was given to her by American Psychological Association(APA). In addition, she was a recipient for the 1980 Kurt Lewin award.

Florence Denmark is another world-renowned female who made her contributions to the world of psychology by researching different topics. Her major contents were based on issues like: violence, prejudice, stereotypes, tribalism, and gender inequality. Also, Florence is known for being a world-renowned teacher, author, and speaker who talks about the psychology of women.

Furthermore, she got different professional recognition for her works.

Elizabeth Koppitz majored in learning disabilities and unique education. She is also an author who focused majorly on the psychoeducational assessment of kids. Some of her books may include: The Bender Gestalt test for young children written in 1964. She also authored psychological evaluation of children’s human figures in 1968.

Because of her great work, the American Psychological Foundation kept her legacy; By creating the Elizabeth Munsterberg Koppitz child psychology graduate student fellowship. The fellowship was put in place to support research projects for graduates and scholarships in children’s psychology.

Brenda is known Internationally as a neuropsychologist. She began her career in the early 1950s by studying the consequences of temporal lobe damage in human beings. This study was carried out in pursuit of her Ph.D. It was also supervised by Dr. Donald Hebb.

Furthermore, in 1957, she collaborate with William Scoville and Milner to publish their paper on ‘loss of recent memory after bilateral hippocampal lesions.’ The article had findings of many experiments done in collaboration with Henry Molaison. The article was seen as the most cited publication in the field of neuroscience.

Just like most of the famous psychologists, Brenda Milner also received her accolades. She received an award for personal scientific contribution. The award was given to her in 1973 by the American Psychological Association. Also, she was inducted into the Canadian Medical Hall of Fame in 1997.

She was also in charge of an outstanding a publication that was based on Preschool and Parental Education. This study was useful in generating interest and amazing research based on child development.

See This: Tips to Manage Your Mental Health

Nadine Lambert was an amazing researcher in the educational sector. Also, she was the founder of the doctoral program in school psychology at the University of California, Berkeley. She was also made director of the program which she had founded. She served as director from 1965 to 2004.

Furthermore, Nadine has been recognized for her contributions as a professional in this field. She received an award from APA in 1986. This award was given to her for her successful research in her field. Also, in 1998, the National Association of School Psychologists called her a living legend. In addition, she was also given accolades as APA division 16 senior scientist.

Gail Wyatt, a professor in the department of psychiatry at the University of California, Los Angeles. She was the first black woman to ever receive a license to practice psychology in California. Dr. Wyatt has been given the privilege to stand and talk in front of the states congress regarding health policy issues.

In 1992, she was honored by the American Psychological Association for her contribution to the research in public policy.

Anne is an amazing psychologist who has majored mainly in differential psychology. She is also known for her research on how environment and hereditary play a huge role in human traits. She is also known as a famous author, of classic books like Psychological Testing.

Her book psychological testing currently has 7 editions, it is also seen as one of the most important psychology books in the twentieth century. This is according to the American Psychological Association.

She has had a long and amazing career in her field as a psychologist. She spent more than thirty years at Fordham University and was made president of APA in 1972. In 198r, she was given a gold medal for her lifetime achievement by the American Psychological Foundation.

Jacqueline was an amazing researcher in her field. She majored in cognitive development. She is famous for her outstanding work on two-choice learning and how culture affects human reasoning. In addition, she is known for her childhood cognition which she showed in her book, children drawing. Children drawing was published in 1977.

Ursula is an amazing researcher who majored in language neurobiology. She was the first person to show that the American sign language was a real language. She added that the language has its grammar and syntax that influences the same area of the brain, as spoken language does.

To honor her amazing career, Ursula was given the American Psychological Award for scientific contributions in 1992. Also, in 2007, she was chosen by the National Academy of Sciences.

Rosa is an amazing psychologist known famously for her work, conversing with children. This outstanding book was written alongside David Katz who was obviously her husband. The book was made from the result of David and Rosa Katz conversing with children. This experiment was done in the course of one year and is also an outstanding publication. Her field was pedagogical psychology.

More Info: How To Make Life Easier For Yourself As A Dementia Caretaker

Leona is a well-known psychologist, teacher, researcher, and writer. She is known mainly for her work on individual differences. She delivered her work by publishing a book called The Psychology Of Human Differences. She published this book in 1947. 26 years later, Leona was made president of the American Psychological Association.

Furthermore, Tyler received a gold medal for life contribution. She received the award from the American Psychological Foundation in 1990.

This is another highly respected woman in her field. She is definitely one of the most respected scholars and researchers. She is known for being part of the group that first took lab measurements for social behavioral experiments. She was also known for bringing other social psychology through her amazing work on attitude systems and attitude change.

Lillian is yet another famous female psychologist. She majored in the field of industrial and organizational psychology. She is responsible for the study of time and motion as a business value and productivity skill.

Lillian had such an amazing career. She got to be the first woman in the society of industrial engineers. She is also the first woman to ever get a Hoover medal. She received the medal for her public service as an engineer.

Her services were also honored in 1984 by the United States postal services. They issued a stamp in her honor, her stamp was part of their Great Americans series.

Tamara is known for her amazing work on anger and anger and frustration of children. She also conducted a research where she figured out the impacts of disability. She even got all her data from disabled people. She was highly respected in her field for her achievements.

OCD Vs Perfectionism — How Are They Different?

How Do Psychologists Decide What Is Abnormal?

Mental Health in Pregnancy: About, Symptoms, Treatment and Challenges