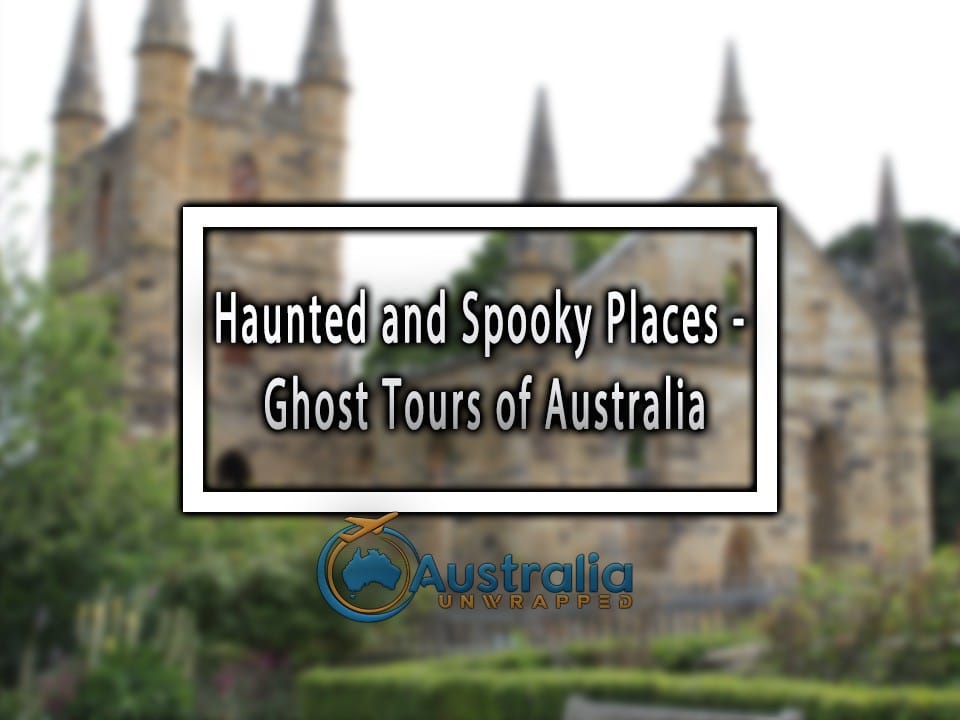 The terrifying history of this place has led it to appear on the list of haunted sites in Australia. More than 100 hangings took place inside the gaol between 1863 and 1924, making it a heart of crime, law, and order. The skull of Legendary Ned Kelley was also displayed in the museum until it was stolen. Now, this haunted place is a tourist attraction because of the spooky ghost tours they offer. The “Hangman Night tour” and ghosts give visitors all the details of the past.

How about having the ghost tours at a swimming pool? It is indeed interesting but it was not for the 17 men who were lured in this watery grave in the past half-century. The place is remembered by the epitaph, “He came for a visit… and stayed forever”.  The historical paranormal tale of this haunted pool goes that a run-away bride named Oolana took her life in this sacred yet haunted indigenous site. She was stopped from marrying her true love and her curse has lived with that pool ever since. The spooky ghost tours of this haunted site can make you go “eerie”, and remember to take care of yourself, Oolana can give you a surprise visit at any time.

The historical paranormal tale of this site started from the death of the hardened criminals in convict days followed by gunmen Martin Bryant who massacred 35 visitors in 1996. Since then the place has reported above 2000 apparitions. Even the hotels nearby will encourage you to fill a “usual occurrence form”. Visit this place for the uncanny ghost tours and feel the paranormal vibe yourself.

This haunted indigenous site has many ghost stories to tell along with some thrilling ghost tours. The estimated deaths in this place are reported to be around 13,000 over its 140 years of operation. The place was originally built for mentally unstable patients but contained some evil prisoners as well, leading to some potential ghost stories. Here, people have witnessed the sound of people banging their heads, the weird smell from the superintendent room, and many other unusual things.

Indeed this place is the most haunted one, among the haunted sites in Australia. Monte Cristo Homestead and its unusual experiences and ghost tours can take your sleep away. A total of 11 deaths have been reported here including the deaths of members of Crawley Family, who were the owner of this haunted house. Asthma attacks, children feeling uncomfortable near the stairs, weird sounds, and some apparitions as well are the common things of this haunted house. However, if you dare to visit the place for its ghost tours, make sure you are ready for a spine-chilling experience.

Resident ghost “Martha Rendell” in the catholic chapel and the library ghost Jack who brushes up on his favourite books are just the two among the many others. This haunted yet World Heritage-listed site can give you the experience of most thrilling ghost tours. Cold spots, sounds of cries, laughter, and yells can’t be denied because these paranormal experiences are felt by many. The Fremantle Arts centre formerly as Fremantle Lunatic Asylum is also haunted by the ghost of one woman whose daughter was kidnapped and her apparition and weird sounds can be witnessed till now.

Unlike the beautiful appearance of this building, the place has a blood-stained past. It was used as the Australian Institute of Anatomy in 1984, which means that the place had a collection of human skulls in the downstairs area. Some paranormal activities including ghost tours in this building are now reported.

This haunted site of Australia is among the World Heritage Site, but the place gives you some mysterious ghost tours. The terrible punishments given to the boys and girls of this orphanage are terrifying. Now the place is sitting abandoned after its closure in 1978. The smashed windows and windy hallways of this haunted building provide the views of hair-raising ghost tours.

This haunted place located in Sydney is not much old as it got closed in the year 1997, shutting down the chapter of sadistic mistreatment happening here. The Mental Hospital is the very first Psychiatric hospital of Sydney, covered in the layer of graffiti now, holds the souls of many anonymous patients who died there. This haunted place and the sad treatment of the patients there now allow the “ghost lovers” to feel the paranormal vibe including some spooky ghost tours as well.

The uncanny ghost tours in Australia are a treat for “ghost story lovers” as they can witness some real paranormal vibes while it can be a nightmare for many others who get Goosebumps if something spooky happens at night. In both cases, it can be a fun and thrilling experience for you.

Where 7 of Australia's Most Haunted Places can be found

Best Ideas For Having A Successful Date On Valentine’s Day

Buying A Home: 4 Things To Do Before Closing