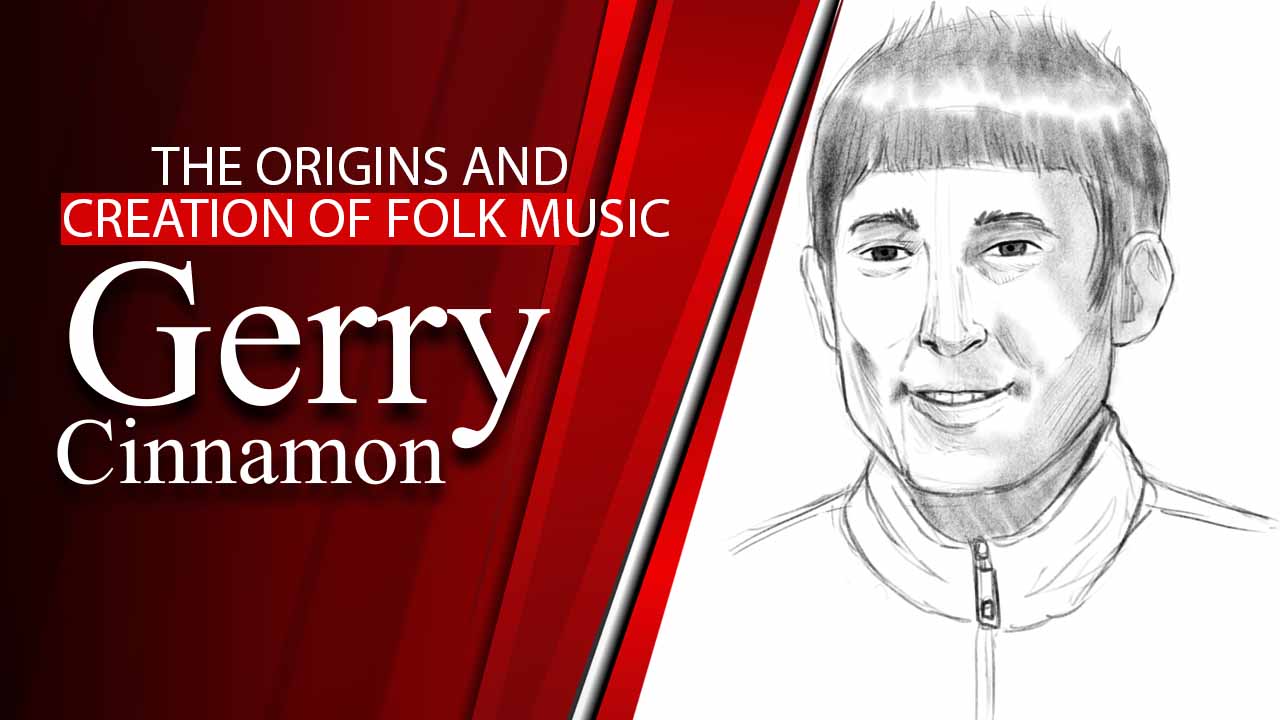 Folk music, as the name suggests, is originally music that was played alongside small communities in places like Europe and the Americas after the colonial period. It’s a genre that has evolved greatly throughout the years, changing its shape so much that the folk music of today is radically different than its original inception.

You can see the truth of this in the simplicity of its instrumentals and its focus on storytelling seeing as this is a genre of music that was used to pass along stories in older times where the forms of media that we are now familiar with did not exist.

Gerry Cinnamon’s vivid storytelling, and use of the harmonica and the guitar are some of the staples of folk and the pillars on what its built upon. He is a 21st century example of the genre in its most modern and popular exposition.

Traditional folk music and its stories are told orally and it serves as a channel for religious rituals, games, and other form of cultural expressions. It typically involves participation of the audience rather than a simple presentation as we are used to in modern concerts. The use and prevalence of folk music as cultural transmitter began to dim down in the 20th century where it was replaced by the popular media we use today. Namely recordings, radio, and television.

Folk music throughout the 19th and 20th Centuries

Folk music had an important role in communities. Its most talented artists were hailed and greatly valued for their role in this and were an important gear in the cultural expression of the time.

Certain political groups used folk music for political agendas as we can see in European nationalism.

There was a blend between this cultural exposition and its artistic component beginning in the 19th century.

Folk music, in different and varied iterations, has a participation in French, Italian, German, Hindi, and Slavic language cultural groups.

It has a strong center in people, and its identity is imbued with the strife and living of the common folk, in opposed to other art forms that had connections to higher social classes, or the nobility as was the case in the 19th century.

You can see the traditions and cultural beliefs of a people through a study of their folk music, the artistic style of the times, as well as the speech and mannerisms people used to communicate with at that time.

The same way you can get a taste of Glasgow living from Gerry Cinnamon first great album Erratic Cinematic, you can experience a slice of German or Czech lives as they were expressed in their respective folk culture and songs.

The nationalist movements in Europe in the 19th century were a great help in preserving the cultural integrity and musical material of folk music, artists of the time coming together to preserve folk music for its cultural and ancestral value to the interested nations.

Its driving motivation being to preserve the cultural depth that is found in folk music, with the nationalistic feelings of the time serving as an enabler for this outreach into the protection of folk music and songs.

The invention of a folk song

The popularization of a folk song depended in large part of how appealing the artist could make it for its audience, being easily integrated into the musical structure of the time was a very important facet for the long term life of a new folk song.

Many times this happened in churches, or in village rituals, new parts were added by different members and a new original song was added along the way.

The main methods of re transmission of folk music were to be passed down through families, from parents to children, coworkers and also in church groups.

Various factors determined the popularity of a song, and its future status as a folk song. Some factors were: originality, creative value, and a composition similar to the popular stream of instrumentals and lyrics.

With all of this in hand, communal acceptance would occur negatively or positively, and with that in turn the song would be replayed by other performers and groups.

Notably, the song would also face possible changes in its way down different groups, with additions or removals of certain lyrics and artistic composition being a commonplace habit for folk songs.

The end product was, thus, a marked exposition of the groups identity as a whole and its musical heritage being presented through the medium of folk songs.

This also lead to different variants in the songs presentation, with different performers singing the songs in ways different from each other among the same region.

Songs were sometimes portrayed in different instruments, including special lyrics specific to the regional characterizations. A song, for example, of a French rendition, would adhere to French music commonalities, while one of Spanish origin, would be in turn with Spanish rhythms and tunes.

Music was an important and prevalent part of life during the conception of folk songs, with many genres being created to attune to different needs and scenarios.

Epics were lengthy songs that narrated heroic deeds, usually concerning warfare and they were rich in their story as well as many times being very poetically evocative.

Ballads were simple songs detailing village life and were typically made to be able to be sung by anyone, regardless of musical skill and talent.

Lullabies compromise a large group of children’s songs that served many different purposes. Educational songs like the alphabet song, for example, were a part of this, or other songs transmitting everyday wisdom in the musical shape.

As the genre evolved, different aspects began to be added to folk music. Dancing was a great part of folk music in the United States 19th century culture, and choir functions in Europe were also a part of making folk music what it is today. Folk music has evolved through the  years, we only hope to know what it will be like in the future.

Now make sure to give a listen to “Canter” or “Lullaby” and experience what the genre can offer to you today with Gerry Cinnamon!