Why Do I Get Downvoted for Commenting Non-Woke Opinion? 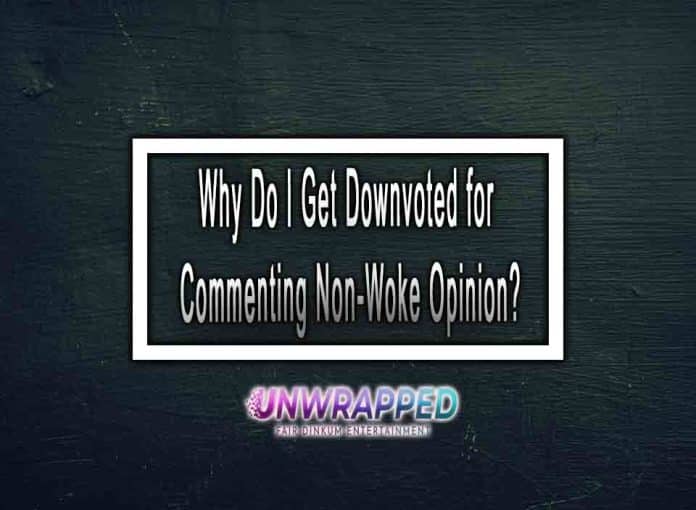 Why Do I Get Downvoted for Commenting Non-Woke Opinion? – It’s no secret that, as a society, we’ve become more and more politically correct. What’s more, this trend isn’t going anywhere anytime soon—and it’s not just affecting the way we speak. It’s also affecting the way we behave online. When it comes to the wokeism subject, there is a huge shift and people are becoming woke.

In a discussion if you give a non-woke opinion, you are likely to be downvoted, called out in a negative way and possibly even banned. This can be seen across the internet on various forums and social media sites. However, you might be wondering why this is happening and what it has to do with wokeism. Let’s take a look at some of the reasons why this trend is so prevalent today.

You’re Not Being Civil.

The first thing to remember when you comment on something is that you’re not the only one who’s going to read it, and there will be people who disagree with your viewpoint. If your comment isn’t phrased in a way that shows respect for the other person’s point of view, or at least acknowledges that they have one, they may downvoted it as a matter of principle. The same is true if you use offensive language or make personal attacks on the other person.

The Subject Matter Is Sensitive And/or Controversial

The subject matter of your post may be a sensitive one. It could be a highly controversial issue that people have strong feelings about and want to discuss rationally and calmly, not in an emotionally charged atmosphere. Or it could be a topic that’s traditionally been considered off limits by the mainstream media but is gaining increasing exposure thanks to social media: think #metoo or transgender rights. If you post something on these topics, then there’s a good chance some people will downvote it just because they don’t want those kinds of issues being discussed.

People Are Getting Tired Of Social Justices Arguments

They’ve seen this same argument before, so they don’t want to see it again. It’s boring and repetitive when people keep repeating the same thing over and over again, especially if it has no effect on their lives. If someone posts something about transgender rights or #metoo, some people might downvote it because they feel like they’ve already seen that argument many times before—and they want something new instead of something old that looks exactly like everything else they’ve seen before.

You’re Not Providing Any Value To The Conversation

If you’re just posting social justice arguments without providing any value to the conversation, then people will get tired of seeing them. People want to see what you have to say about an issue, and if all they’re getting is a link with no commentary or personal experience added in then chances are good that it’s going to be downvoted.

Why Do I Get Downvoted for Commenting Non-Woke Opinion? – It’s important to understand that we all have opinions and different ways of thinking. We can’t expect everyone to agree with each other. The important thing is to be respectful of others even if you disagree with them. What matters most is how well we communicate our ideas with each other so that our minds can continue growing together in unity rather than division.

Must See: Where Did Woke Culture Originate?