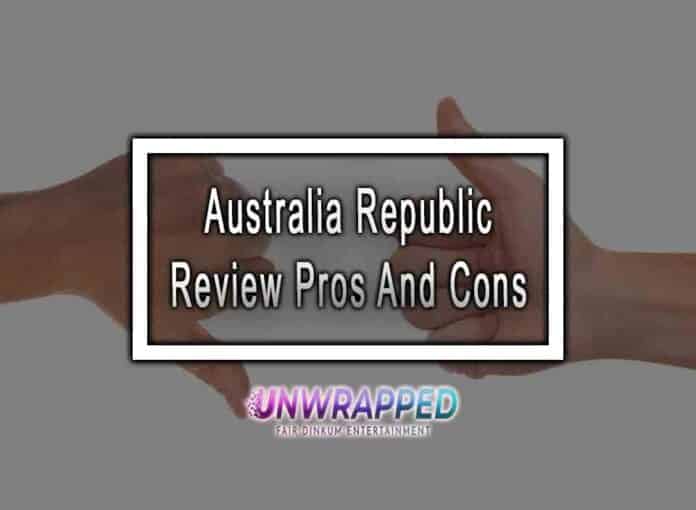 The Republic of Australia is a country in the southern hemisphere. It’s home to more than 24 million people, and those people have debated for nearly 200 years whether or not to make Australia a republic nation. If you’re interested in traveling there or immigrating, keep reading to look at both sides of the debate.

Enjoy This: Arguments For And Against Australian Republic

What is a Republic Form of Government?

Its name comes from the Latin term “res publica,” which means that all citizens, including foreigners and non-citizens, have the right to participate in its politics without discrimination.

A republic has an elected head of state who acts as both head of state and head of government. This means they can be involved in setting policy but do not actually rule directly (as with monarchs).

Pro’s of Australia Becoming a Republic

Some of the pros of Australia becoming a republic are:

An Efficient Form of Government.

An efficient government is more likely to be able to get things done, as opposed to being bogged down in bureaucracy.

An inefficient system of governance will have trouble getting anything done because it is constantly stuck trying to figure out the best way forward.

Take a look at any large bureaucracy, and you’ll quickly see how they operate: they have multiple layers of management and decision-makers, and each has its own ideas about what should happen next. If everyone wants their own way, nothing will get done.

A republic is also better than a monarchy because it is much less likely to have an inefficient system of governance like this one, with so many layers on top of each other, that no one can make any accurate decisions anymore – not even our prime minister.

Plus, monarchies are traditionally less democratic than republics are because only certain people (the royal family) get a say over how taxes should be spent or whether wars should be fought – not all citizens do so here either but still.

A Republican Government is Constitutional.

The Australian Republic would be a form of government in which the head of state is not a monarch but an elected president. This is not just a different type of government but another type of society.

Republics are based on the principle of popular sovereignty, meaning that authority originates with the people and no one else.

The president does not possess any inherent power and may be removed from office if he or she loses the support of parliament or fails to uphold duties as stipulated in law, such as defending Australia from foreign attack.

Simple Decision Making: The Australian parliament is based on majority votes. With this type of government, decisions are made in a way that is quick and easy to understand.

Decisions Affect the People Who Make Them: When a decision needs to be made, the people who will be affected by it make the decision.

For example, if you were part of an Aboriginal tribe and your clan was going through hard times, there wasn’t any food or water left in your area because there was no rain for months.

Then all members of your tribe would gather at a meeting place where they could talk about things such as what went wrong with climate change so far away from them (because every country has its own set amount).

Citizen Representation on an Equal Footing.

In a Republic government, the citizenry is represented on an equal footing. If you’re a citizen of Australia, you have the same say in how your country is run and can participate in decision-making as every other citizen.

In a democratic government, people have the right to vote for their representatives. This can take on many forms, but it’s usually some sort of election that allows citizens to choose who will represent them in government.

Encourages the Participation of the General Public.

The government will be held accountable to the people by being a republic. The general public has power over their elected leaders and can influence their actions in office.

Without a king or queen, there is less government hierarchy, making it easier for individuals to participate in politics.

In addition to holding our leaders accountable, we can influence their decision-making processes by having our voices heard through voting on issues that affect us all (such as tax rates).

Political Authority is Conferred to Rulers and Officials through Election.

A republic is a government where the state is ruled by elected officials. In Australia, the people vote for their national leaders every three years.

This means that political authority is conferred on rulers and officials through the election. The people have a say in who will be making decisions concerning them and their country.

If Australia were to become a republic, this process of elections and conferring power to political authority would extend to the highest office in the land, which would have to be the presidency.

The Rights and Liberties of the Citizens are Protected.

The government is responsible for protecting the citizens’ rights and upholding the land’s laws. This means that any actions taken by a government must be under both international law and domestic law.

In addition to this, it also means that they must provide protection from foreign invaders and domestic threats.

This can be seen in Australia’s history and in other countries that have gone through similar situations.

In Australia’s case, when there was talk about removing British sovereignty from Australia, many people felt threatened by this idea because they did not want their rights to be taken away from them or their families affected by such changes.

One of the main benefits of having a republic government is that it allows for quick utilization of resources.

In a republic, all members play an active role in decision-making, so there are no delays caused by waiting for a single person to be available. If you need something done quickly, you can get it done quickly.

A Republic is a form of government in which the head of state is not a monarch. The term ‘republic’ comes from the Latin res publica, which translates to ‘public affair’ or ‘public business.’

People elect their leaders in a republic to represent them in government and make decisions for them.

The United States and India are republics, and the president serves as head of state in these countries.

Unlike in an absolute monarchy, where one person rules with total power over all matters, in a constitutional monarchy – like Great Britain – the monarch has certain powers but also must answer to parliament (their governing body).

Cons of a Republican Government

The cons of a Republican Government are:

As it is well known, the Federal budget is an essential document that can be used as a tool to gain political support.

The government can use the funding to reward those who support them and punish those who oppose them.

This means that many people feel pressured into voting for the party they think will give them the most benefit in terms of money or services rather than voting for their true beliefs or ideals.

The main drawback to the Republican government is that it consumes enormous budgets. The government does not have enough resources to operate its services and provide goods for its citizens.

The government also spends time on matters irrelevant to the people’s needs, such as making laws and policies about what people should do in their personal lives.

Also see: Making Australia A Republic May Not Be What You Imagined

Difficulty in Getting the Laws Passed.

This makes the government’s actions slow and inefficient because it must wait for all its members to agree on what should be done.

Interference in the Judicial System.

The judicial branch is sometimes seen as less independent than other branches of government, and this is because the judges are appointed by the president and confirmed by the Senate.

It is difficult for a judge to be removed from office without good cause, which means that they may not always make decisions based on what’s right or wrong but rather what will make them look better in front of the public.

The pros and cons of a Republic government are just some of the many things you should consider before making any decision.

The country has been through a lot over the years, and its people deserve a better future. Ideally, this article has given you more insight into how our government works, what it means for us as citizens, and why we need change now more than ever.

Not To Miss: Australia Must Now Become A Republic