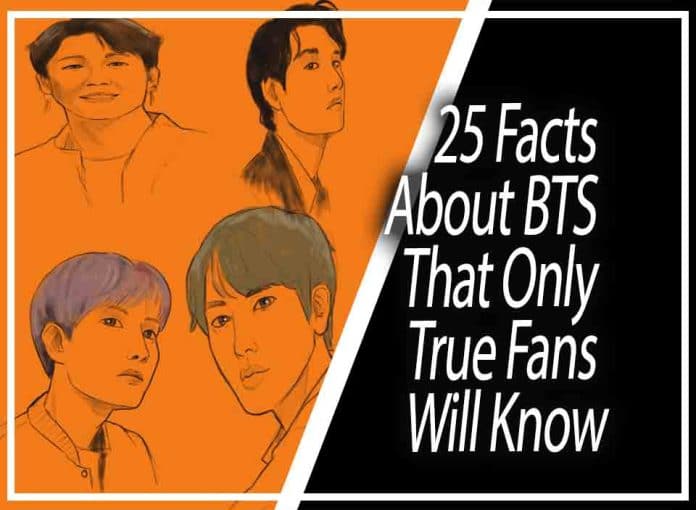 25 Facts About BTS for Real Fans

BTS, also known as the Bangtan Boys, is a world-famous boy band from South Korea with seven members. They started forming in 2010 and launched in 2013 under Big Hit Entertainment. The eponymous single from their fifth EP, Love Yourself: Her (2017), became their first number one hit on the Billboard Hot 100, making BTS the first K-pop act to top the Hot 100 and the second Korean act with a number one album.

The group’s name, BTS, is an acronym for Bangtan Sonyeondan to mean “Bulletproof Boy Scouts.” According to member J-Hope, the name signifies the group’s desire “to block out stereotypes, criticisms, and expectations that aim at adolescents like bullets.” Since their debut, BTS has released several albums and performed on several world tours.

Their fan base, ARMY, is one of their greatest assets. Their fans are loyal and always encourage BTS with positive affirmations and kind words.

One of their songs, “Spring Day,” was written about the Sewol Ferry tragedy in South Korea in 2014. The song got written as therapy for their fans grieving after the disaster.

Another song they did got called “Am I Wrong,” which featured an entirely English chorus. They have even collaborated with Steve Aoki on a track called “Waste It On Me,” released in November 2018.

The BTS Facts That Only True Fans Will Know

Now you have the twenty-five facts that only fans know about BTS. If you know these facts, you are now a true fan of the BTS, and you know more than ordinary people understand. Go ahead and have fun with BTS music and the ARMY!