10 Of The Worst Natural Disasters To Happen in Australia 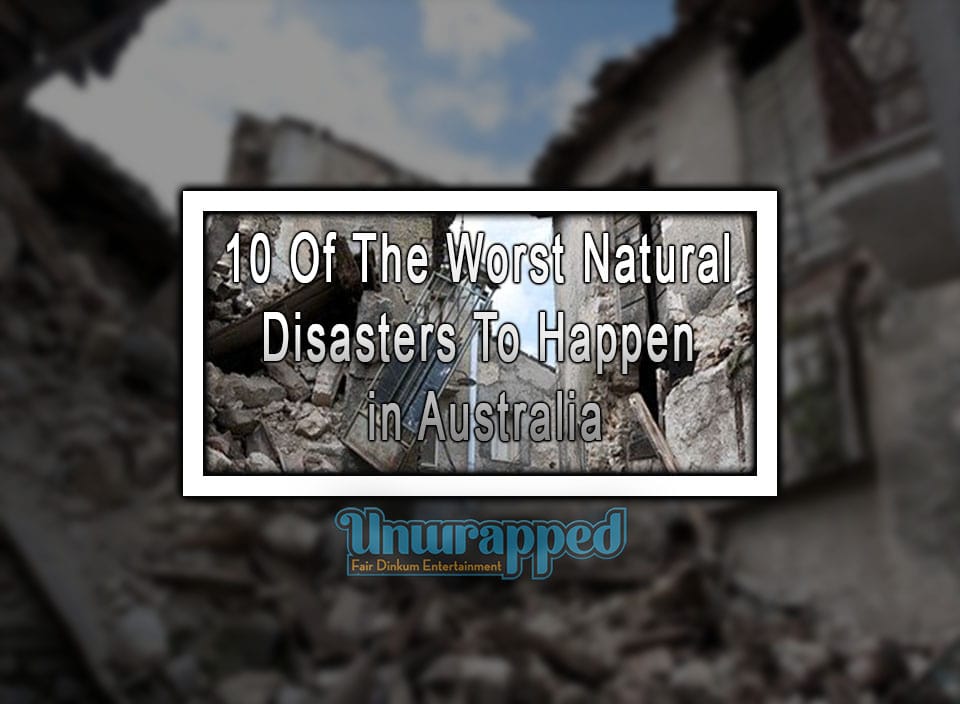 Nature is something that everyone on earth enjoys and certainly, without nature there will be no life. However, at the same time nature can be cruel and Australia hasn’t been spared of natural disasters throughout its past. The continuing climate change that too few people around the globe take serious enough, has a profound effect on nature and occurring disasters.

The worst natural disaster ever to strike Australia is the flu pandemic which hit the world. The deadly H1N1 flu virus that struck the world from January 1918 to December 1920 where close to 5% of the population was lost didn’t skip Australia either. This caused Australia’s worst disaster with 12,000 lives lost and claimed predominantly immune-compromised, juvenile and older people.

The 1968 Meckering earthquake measured a whopping 6.9 on the Richter scale and while no lives where lost, almost the entire town was destroyed. Millions of dollars of damage include the water main, railway lines and the only structures that withstood this major quake were three businesses and 16 houses.

One of the worst natural fires followed the hot and long summer in Australia in 1939. On January 13th blazing fires were fanned by strong winds and took the entire Victoria by storm to cause incredible widespread destruction. While 71 people lost their lives, the environment took the biggest hit. As far away as New Zealand ashes were spread with millions of hectares of bush and nature affected that took decades to recover but never forgotten.

After unprecedented rainfall during February 1955, the Hunter Riverbanks could not hold the flooding waters and the banks burst. The La Nina caused weather conditions which developed a monsoonal depression and impossible to hold the catchment. The inland sea created by the Hunter Valley floods was the size of Wales and England. The entire inland city, Maitland were totally flooded by the floodwaters. While over 100 homes were destroyed beyond repair and 58 homes completely washed away, more than 2180 homes in the region were flooded as well. Other massive losses were thousands of hectares of crops and thousands of cattle and other animals as well.

Read More: Woman Solo Travel Australia How to do it Safely

On February 16, 1983, there were a whole series of bushfires that raged across Victoria and Southern Australia. The lack of humidity and years of drought caused more than 180 fires to spread and burn across the states. Violent and sudden wind changes resulted in 75 deaths while massive numbers of destroyed properties were also destroyed. These fires were one of the costliest in the history at the time with immeasurable native animals killed and destroyed, native flora and more than 2545 people that lost their homes.

In 1967 a devastation occurred that is known as Black Tuesday and at that time it was Australia’s worst-ever natural disaster. It only lasted five hours but fires were spreading so fast and viciously that 110 were raging across and around southern Tasmania. 900 people were injured while 62 lives were lost while the damage to plant and animal life and loss of property were horrendous. One of these fires spread as close as two kilometres from Hobart’s CBD. 7000 homes were lost with over 62, 000 perished farm animals and half a million acres of land destroyed.

2009 is a year and in particular a time that will never be forgotten in the history of Australia. In the days leading up to this horrific day, across the state the temperatures reached a historical high with measurements of 46.4 degrees Celcius. The entire state experienced an incredibly dry spell and the northwesterly winds contributed to the imminent disaster by blowing at speeds up to 100 km/h. Fires started and spread fast and horrendous and burnt entire communities to the ground at such a speed that residents couldn’t escape in time. 209 lives were lost, thousands of animals and native flowers. It is the top 10 worst fires in the world and in the last ten years it is the world’s worst fire as well.

In 1974 the riverbanks of Brisbane River broke and flooded through the surrounding areas and the city. Continuous rain flooded the CBD prior to the breaking of the riverbanks and on Australia Day the worst happened. Sixteen people lost their lives while more than 6,700 homes were extensively damaged.

On Christmas Eve 1974, Australia experienced its worst festive season ever when the largest cyclone to date hit Australia. It wreaked complete havoc and nearly destroyed the entire Darwin. On Christmas Day, there were no celebrations as the majority of the residents were homeless. What made it even worse is that all communication was lost and Darwin was completely cut off from the outside world. Hours after the disaster, until late afternoon news only broke around Canberra and the rest of Australia that 71 lives were lost and that most people were homeless.

The coastal city of Newcastle experienced a massive tragedy in 1989 with no New Year’s celebrations in the city and around the country. On December 28 at 10.27 am an earthquake hit the city. It measured 5.6 on the Richter scale with a death toll of 13 while 160 people were badly injured. The damage caused amounted to billions of dollars and the tremors and quake could be felt as far away as Albury and neighbouring locations. It was a massive tragedy to the city with more than 35, 000 damaged homes and most of the historical building as well.

The severity and frequency of natural disasters will increase with ongoing climate change. Over the past fifty years, Australia’s number of record hot days has doubled. When a heatwave strikes it is hotter and a longer period of heat than ever before. Since 1993, the sea level has been increasingly rising and intense, short rainstorms triggering urban flooding and flash folds are also more frequent.

What are the top 5 natural disasters in Australia?

Here are some tips on how to be prepared, and how to cope during and after extreme weather events. Natural disasters in Australia can include heatwaves, bushfires, droughts, floods, severe storms and tropical cyclones, earthquakes, tsunamis and landslides.