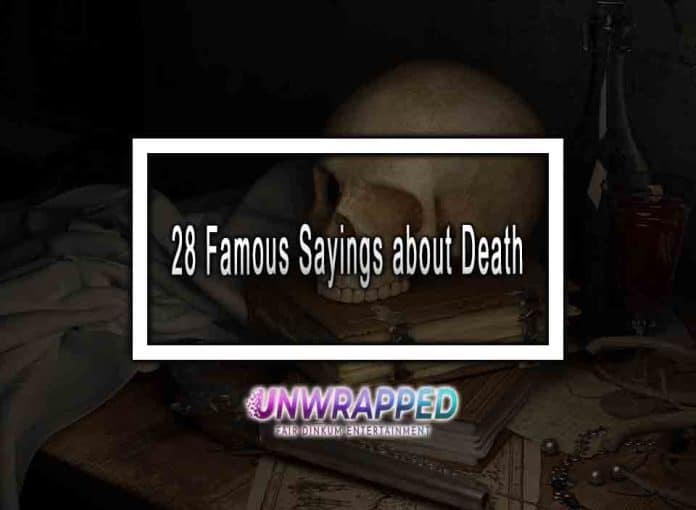 Here are my favorite 28 quotes or sayings about Death be sure to comment at the end with your favorite:

Think of yourself as dead. You have lived your life. Now, take what’s left and live it properly. What doesn’t transmit light creates its own darkness. — Marcus Aurelius

I cannot escape death, but at least I can escape the fear of it.— Epictetus

That man lives badly who does not know how to die well.— Lucius Annaeus Seneca

Given that all must die, it is better to die with distinction than to live long.— Musonius Rufus

What is death? A scary mask. Take it off – see, it doesn’t bite. Eventually, body and soul will have to separate, just as they existed separately before we were born. So why be upset if it happens now? If it isn’t now, it’s later.— Epictetus

Death is not an evil. What is it then? The one law mankind has that is free of all discrimination.— Lucius Annaeus Seneca

Choose to die well while you can; wait too long, and it might become impossible to do so.— Musonius Rufus

You may leave this life at any moment: have this possibility in your mind in all that you do or say or think.— Marcus Aurelius

Before I became old I tried to live well; now that I am old, I shall try to die well; but dying well means dying gladly.— Lucius Annaeus Seneca

Don’t behave as if you are destined to live forever. Death hangs over you. While you live, while it is in your power, be good. Now.— Marcus Aurelius

When the longest- and shortest-lived of us dies, their loss is precisely equal. For the sole thing of which any of us can be deprived is the present, since this is all we own, and nobody can lose what is not theirs.— Marcus Aurelius

No evil is great which is the last evil of all. Death arrives; it would be a thing to dread, if it could remain with you. But death must either not come at all, or else must come and pass away.— Lucius Annaeus Seneca

Let death and exile, and all other things which appear terrible be daily before your eyes, but chiefly death, and you will never entertain any abject thought, nor too eagerly covet anything.— Epictetus

Let us prepare our minds as if we’d come to the very end of life. Let us postpone nothing. Let us balance life’s books each day. The one who puts the finishing touches on their life each day is never short of time.— Lucius Annaeus Seneca

Remember also that each man lives only the present moment: The rest of the time is either spent and gone, or is quite unknown. It is a very little time which each man lives, and in a small corner of the earth; and the longest surviving fame is but short, and this conveyed through a succession of poor mortals, each presently a-dying; men who neither knew themselves, nor the persons long since dead.— Marcus Aurelius

Accept death in a cheerful spirit, as nothing but the dissolution of the elements from which each living thing is composed. If it doesn’t hurt the individual elements to change continually into one another, why are people afraid of all of them changing and separating? It’s a natural thing. And nothing natural is evil.— Marcus Aurelius

Death is neither a good nor a bad thing, for that alone which is something can be a good or a bad thing: but that which is nothing, and reduces all things to nothing, does not hand us over to either fortune, because good and bad require some material to work upon. Fortune cannot take a hold of that which Nature has let go, nor can a man be unhappy if he is nothing. – Lucius Annaeus Seneca

You can discard most of the junk that clutters your mind — things that exist only there. And you will immediately make vast space for yourself by grasping the whole universe in your thought, by contemplating the eternity of time, and by reflecting on the speed with which things change — each part of everything, the brief gap from birth to death, the infinite time before, and the equally infinite time that follows.— Marcus Aurelius

“Stop whatever you’re doing for a moment and ask yourself: Am I afraid of death because I won’t be able to do this anymore?” —Marcus Aurelius

“Were all the geniuses of history to focus on this single theme, they could never fully express their bafflement at the darkness of the human mind. No person would give up even an inch of their estate, and the slightest dispute with a neighbor can mean hell to pay; yet we easily let others encroach on our lives—worse, we often pave the way for those who will take it over. No person hands out their money to passersby, but to how many do each of us hand out our lives! We’re tight-fisted with property and money, yet think too little of wasting time, the one thing about which we should all be the toughest misers.” —Seneca

“Brief is man’s life and small the nook of the Earth where he lives; brief, too, is the longest posthumous fame, buoyed only by a succession of poor human beings who will very soon die and who know little of themselves, much less of someone who died long ago.” —Marcus Aurelius

“It’s better to conquer grief than to deceive it.” —Seneca

“It is not death that a man should fear, but rather he should fear never beginning to live.” —Marcus Aurelius

“But death and life, honor and dishonor, pain and pleasure—all these things, equally happen to good men and bad, being things which make us neither better nor worse. Therefore they are neither good nor evil.” —Marcus Aurelius

Choose to die well while you can; wait too long, and it might become impossible to do so. —Gaius Musonius Rufus