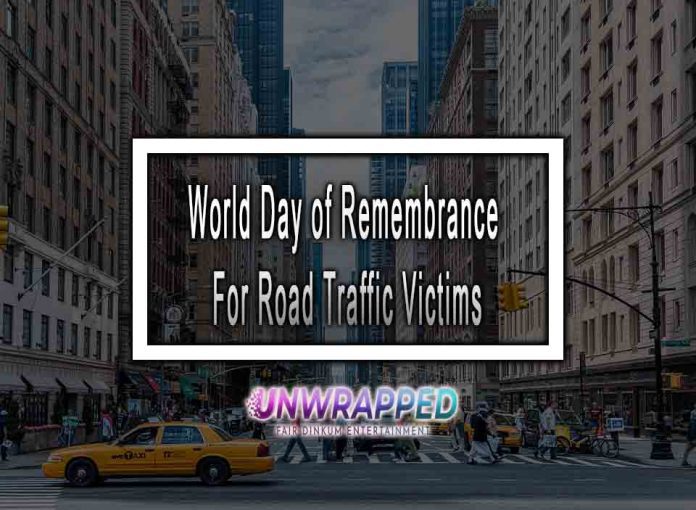 World Day of Remembrance For Road Traffic Victims is celebrated every 20 November. This day is an annual observance to honour those who have died in traffic accidents and their families. Since its inception in 1993, RoadPeace, a British road collision victim organisation, has worked tirelessly to spread awareness about the dangers of driving. A global status report on road safety released by WHO in December 2018 said that 1.35 million people die potentially each year in traffic accidents. According to the CDC, accidents on the road are now the most significant cause of death for those ages 5 to 29. Pedestrians, bikers, and motorcyclists in developing nations bear the brunt of the load.

According to the study, progress toward SDG 3.6 objective 3.6, which aims for a 50% decrease road traffic deaths by 2020, remains far from sufficient. Do you know? More than half of all road traffic deaths are among walkers, cyclists, and motorcyclists, who are the most susceptible. As a group, “vulnerable road users” include pedestrians, cyclists, and the occupants of motorised 2- and 3-wheeled vehicles. They potentially account for half of all road traffic deaths worldwide. Moreover, a more significant percentage of vulnerable road users die in low-income nations than high-income countries.

Brigitte Chaudhry MBE enjoyed a tranquil existence with her husband and kids until fate threw the dice and made her the face of Global Road Traffic Victim advocacy. In 1990, a tragic tragedy claimed the life of Chaudhry’s only son, Mansoor, at 26 years old, prompting her to seek retribution. She was not pleased with the reaction she got. The scepticism of her neighbours and the disinterestedness of the legal system made her feel sick to her stomach. Chaudhry started RoadPeace, a British organisation for victims of traffic accidents, after being appalled by the careless manner in which her son’s death had been handled. People who have been potentially injured or killed in car accidents can call a toll-free hotline operated by RoadPeace at any time of day or night for emotional support and information.

RoadPeace established the World Day of Remembrance for Road Traffic Victims in 1993 to bring attention to the plight of the many victims of traffic accidents. There have been more than 30 nations where the day has spread in the last decade, and it’s now an international observance of the lives tragically lost in road accidents. There is a recurring theme throughout the year.

“Life is not a car part” and “First Responders” have been previous themes. The memory has also enabled the UK government to shift its attitude towards the victims of road accidents and comprehend the gravity of the situation. RoadPeace is Chaudhry’s effort to modify people’s perceptions of people who have been injured in car accidents. Today, hundreds of grieving families have been brought together by her unwavering activism.

Bring people together on the third Sunday in November to lift the mourning family and show them support. To date, the quick actions of first responders and other emergency care providers have avoided several deaths and injuries. Throw a party in remembrance of road traffic victims on the International Day of Remembrance for Road Traffic Victims.

Share the potential word with your friends and neighbours. Every year, more than 1.3 million people are murdered on the roads. Every year, the World Day of Remembrance for Road Traffic Victims is held to draw attention to the staggering number of preventable fatalities and the lack of reaction from most nations’ governing agencies.

RoadPeace thinks that good knowledge, proper training, and the availability of safety gear may save many lives. The third Sunday in November is dedicated to raising awareness about the need to make these resources available to the general population. Deaths on the road are brutal, distressing, and, most of all, unexpected. As a collective, the #WDoR group offers support and consolation to the grieving families who are often met with a lack of empathy from the general public and the government.

What is the Good Samaritan Law?

The Good Samaritan Law was eventually formed with the assistance of the ministry of road transport and Highway to offer protection and support to bystanders.