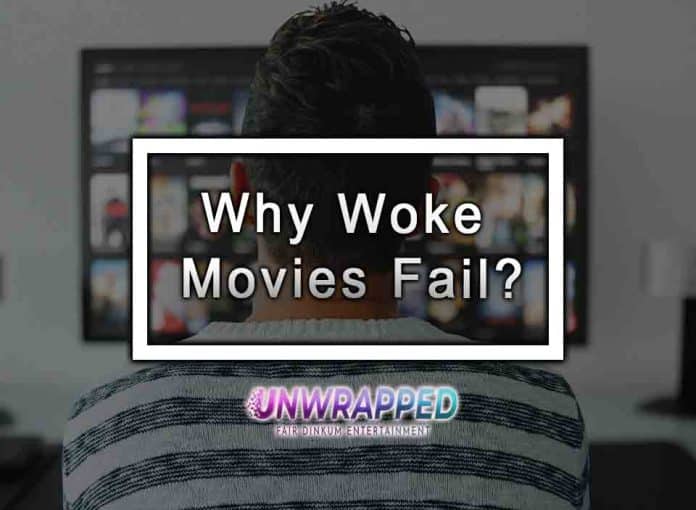 In recent years, there has been an influx of movies that have been dubbed as “woke.” These movies often feature strong female leads, people of color in prominent roles, and LGBTQIA+ characters. While these movies may have good intentions, they often fall short in execution. One of the main problems with these movies is that they often rely on stereotypes. For example, many woke movies about black characters will focus on the struggles that they face in society.

In the past few years, Hollywood has seen an increase in diversity, inclusivity, and representation of minority groups. Films like Black Panther and Crazy Rich Asians are breaking records and bringing diversity to the forefront of pop culture consciousness. However, some movies intended to be woke or progressive aren’t received well by critics or general audiences. Why does this happen? Why do woke movies fail? Examples are included below to illustrate why woke movies fail so much more than expected.

The first reason why woke movies fail is because they lack credibility. When a movie tries to be woke but doesn’t do its research, it comes off as inauthentic and often laughable. For example, the 2017 film The Last Jedi was criticized for its lack of knowledge about actual Jedi culture. Another issue with credibility is when a movie tries to force a woke agenda down its audience’s throat without any subtlety or nuance.

In order for a woke movie to be successful, it cannot personify social issues. Social issues are not people, they’re ideas. And while a film can have characters that represent social issues, the film itself should not be about the issue. For example, Get Out is not a movie about racism, it’s a movie about a black man who visits his white girlfriend’s family and realizes that they’re all racists. The social issue of racism is present in the film, but it’s not the focus.

A big reason why woke movies fail is because they don’t have mass appeal. They’re usually too niche or too preachy, and as a result, they don’t make enough money to be successful.  Even if the film does well with critics, that doesn’t mean it will do well with the masses. Sometimes it’s better to go broad with your subject matter instead of going for the tiny minority of people who want to see something like this although many feels there should be more.

In a woke movie, the plot is often driven by conversations and character development instead of action. While this can be engaging, it can also make the film feel slow-paced or even boring. Additionally, audiences may not be able to connect with the characters if they don’t have enough opportunity to see them in action.

There are many reasons why woke movies fail. One reason is that they are often told wrong. For example, the 2017 film The Great Wall was billed as a woke movie because it had a diverse cast. However, the film was criticized for its lack of Asian representation behind the camera. In other words, the people making the movie didn’t understand what it means to be truly woke. As a result, the film failed both commercially and critically.

This is the main reason why woke movies fail. Woke movies often rely on stereotypes and cliches in order to convey their message. This often results in the movie being preachy and didactic. For example, the movie “Dear White People” is a prime example of this. The movie relies heavily on stereotypes and cliches in order to make its point. As a result, the movie comes across as preachy and didactic.

The main reason why woke movies fail is because they’re poorly written and directed. A lot of times, the people behind these films don’t really seem to understand what they’re trying to say. They end up making films that are heavy-handed and preachy, and that’s not what audiences want.

They Have No Sense Of Humor

Another reason why woke movies fail is because they have no sense of humor. A lot of times, these films take themselves way too seriously, and they’re just not fun to watch. audiences want to be entertained, not lectured.

Another reason why woke movies fail is because they often treat their diverse characters badly. A lot of times, these films will have token minority characters that are there just to check a box, and they’re not well-developed or three-dimensional. This is a huge turn-off for audiences.

If filmmakers want to make woke movies that actually succeed, they need to learn from their mistakes. They need to start making films that are actually well-written and directed, that have a sense of humor, that treat their diverse characters well, and that don’t pull their punches. If they can do that, then maybe they’ll finally start making movies that audiences actually want to see. Woke films can be successful, but only if they’re actually good. We hope in future to see more woke films that actually deliver on their promise.

While there are many potential reasons why woke movies fail, some of the most common include: poor writing, bad acting, poor directing, and a lack of understanding of the target audience. In order for a woke movie to be successful, it must avoid these pitfalls. However, we hope in future projects, filmmakers will take into account these mistakes so that they can create a movie that’s not only woke but also highly entertaining.