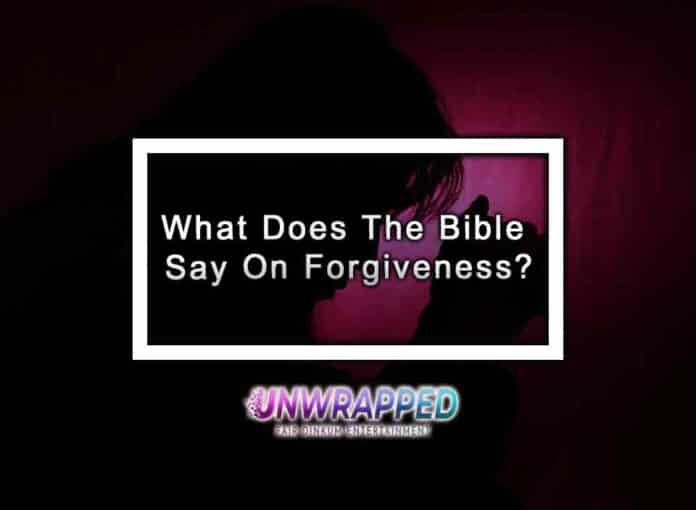 A central theme in the Bible is forgiveness. In fact, there are over 500 verses that speak directly to the idea of forgiveness. And while some of these verses are well-known, others may not be as familiar. So, what does the Bible say on forgiveness? What are some of the key verses that discuss this topic? In this blog post, we will explore what the Bible has to say about forgiveness. We will look at a variety of verses from both the Old and New Testament to get a fuller understanding of what Scripture says on this important topic.

Keep Reading:  What Does The Bible Say About Swearing On Someone’s Life?

In general, forgiveness is the act of pardoning an offender. Forgiveness is often misunderstood to be simply forgetting about an offense or pretending it never happened. The Bible however, gives a much richer and fuller definition of forgiveness.

Biblically, forgiveness is releasing someone from the debt they owe you because of the wrong they have done. It is letting go of the resentment and bitterness you feel towards them and instead choosing to show mercy. It is important to note that forgiveness does not mean condoning the offense or excusing the offender. Forgiveness in the Bible always assumes that justice has been or will be served.

There are many examples of forgiveness in the Bible but one of the most famous is Jesus Christ forgiving those who crucified him on the cross. As he was dying, Jesus prayed for his Father to forgive those who had sinned against him (Luke 23:34). This incredible act of forgiveness serves as a model for us as Christians. We are called to forgive others just as we have been forgiven (Colossians 3:13).

What The Bible Says About Forgiveness

The Bible is very clear that forgiveness is a part of the Christian life. In fact, it’s hard to find a single place where Jesus doesn’t talk about forgiveness. He even said that we must forgive others if we want to be forgiven by God (Matthew 6:14-15).

So, what does the Bible say about forgiveness? First, we see that forgiveness is something that God does. He is the one who “blots out our transgressions” and “removes our sins as far as the east is from the west” (Isaiah 43:25). Second, we learn that forgiveness is available to everyone who asks for it. The Bible says, “If we confess our sins, he is faithful and just and will forgive us our sins and purify us from all unrighteousness” (1 John 1:9). Third, we see that forgiveness results in reconciliation. When God forgives us, he restores our relationship with him. And when we forgive others, it opens the door for reconciliation with them as well.

So, what does all this mean for us? It means that forgiveness is essential to the Christian life. We cannot grow in our relationship with God or others without it. If you’re struggling to forgive someone who has hurt you, ask God for help. He will give you the strength you need to take this important step.

The Nature Of Forgiveness

Forgiveness is not about condoning the wrong that was done to us; it is about releasing ourselves from the negative emotions that are weighing us down. When we forgive others, we are also choosing to let go of the grudge that we are holding against them. A grudge is like a poison that slowly eats away at our happiness and peace of mind. Forgiveness is the antidote to this poison. It allows us to move on with our lives and have healthier relationships with those around us.

In Luke 17:3-4, Jesus says, “If your brother or sister sins against you, rebuke them; and if they repent, forgive them. Even if they sin against you seven times in a day and seven times come back to you saying ‘I repent,’

The Importance Of Forgiveness

One of the most important things we can do in our lives is to learn how to forgive those who have hurt us. It can be difficult to forgive someone who has caused us pain, but it is important to remember that forgiveness is not about condoning what they did – it’s about freeing ourselves from the anger and resentment that can poison our lives if we hold on to it.

Forgiveness is hard, but it’s worth it. When we forgive those who have hurt us, we are choosing to let go of the anger and pain they have caused us. This allows us to move on with our lives in a healthy way, free from the bitterness that can come from holding on to resentment.

When Should We Forgive?

The Bible is clear that there is a time for forgiveness. In Matthew 18:21-22, Jesus says, “Then Peter came to Him and said, ‘Lord, how often shall my brother sin against me, and I forgive him? Up to seven times?’ Jesus said to him, ‘I do not say to you, up to seven times, but up to seventy-seven times.'” Jesus is teaching us that there is no limit to how many times we should forgive someone who has wronged us. We are also told in Ephesians 4:32 to “be kind to one another, tenderhearted, forgiving one another, even as God in Christ forgave you.” When we have been forgiven by God, we are called to extend that same forgiveness to others.

There are some instances where forgiveness may not be possible or may not be the best option. If someone has physically harmed you or your family in some way, it may not be safe to forgive them. If they have taken something from you that can’t be replaced (like a valuable piece of jewelry), it may be best to seek restitution instead of forgiveness. And sometimes people will refuse to repent or ask for forgiveness even when they know they’ve done wrong. In cases like these, it’s important to pray for wisdom and guidance from the Holy Spirit about how to proceed.

Forgiveness is one of the core tenants of Christianity, and the Bible has a lot to say on the subject. If we are to truly follow Christ’s example, then forgiveness must be a central part of our lives. Forgiveness isn’t always easy, but it is always worth it. We hope that this article has helped you understand what the Bible says about forgiveness and given you some food for thought on how you can incorporate forgiveness into your own life.

Also Enjoy: What Does The Bible Say About Happiness On Earth?