Top 10 Most Dangerous Animals in Australia 2023 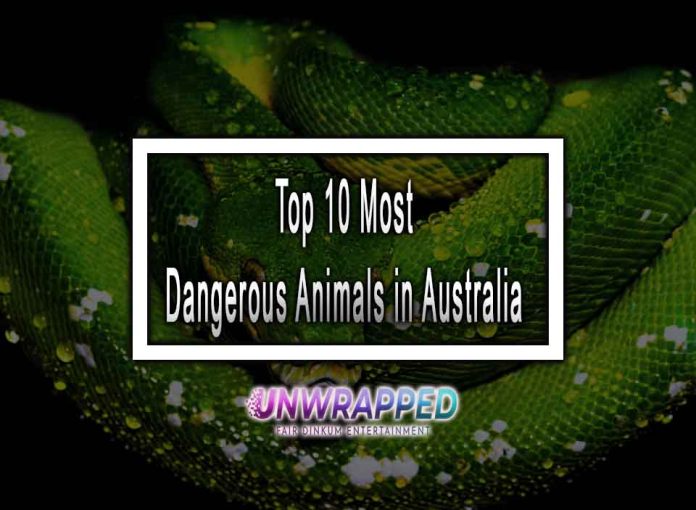 Any country is incomplete without its flora and fauna. We all are aware of how wildlife is important for the ecosystem. It provides balance by helping in the smooth functioning of various environmental processes. Wildlife of a country is endemic to that place. There is pride in being home to a species that cannot be found anywhere else in the world. It also helps in enhancing the tourism of the country as people travel from far off places to look at the different creatures. There are many deadly animals that roam this Earth and it is vital that one be aware of them so that they know which place to visit and which to avoid. Also, it should be taught what to do in case someone is bitten by a venomous animal.
The country that will steal your heart, Australia has flourishing wildlife, brimming with different types of animals, some endemic to the island continent only.

Animals That Kill in Australia

There are mammals, reptiles, fishes, amphibians and insects of all kinds. And it is also true that Australia is the home to the world’s deadliest creatures. Dangerous wild animals roam this country, Australian wildlife is full of animals that can give you nightmares. It’s often heard that snakes in Australia are like neighbours, they can pay you a visit anytime they want. Not to mention, spiders and giant crocodiles. Many wildlife enthusiasts come to this country just so that they can see these deadly yet beautiful beasts. Here are ten dangerous Australian animals that are bound to give you the chills.

Infamous for its high varieties of creepy crawlies, Sydney Funnel Web Spider is one of the few Australian animals that you should avoid at all costs. Brimming with venom, this snake should be on your list of deadly wild animals. Atrax Robustus has a reputation for having the deadliest venom inside its body. Vulnerable to UV light, this spider finds shoes to be a perfect home during the day and thus it is generally advised to search your shoes properly before you wear them. However, it is found that only the male species is poisonous. The venom of Sydney Funnel Web spider can lead to death and the symptoms are sweating, tingling and muscle spasms making it a lethal Australian animal.

Considered as the second most poisonous snake in the world, there isn’t much left to say about this deadly beast of Australia. Pseudonaja textilis, is one of the deadliest Australian animals and has a status for having an ill-temper. To make matters worse this snake is usually found in the populated areas making them responsible for more than half of the snake deaths in this country. In case bitten and an antidote is not used as fast as possible, the venom of this snake results in death and that too within an hour. It’s more than one metre in length and acts very quickly.

Named after their cube-shaped bodies, these aquatic animals are not far behind when it comes to being one of the lethal Australian animals. Found in the northern areas and that too during the swimming months, many humans fall victim to them. It is scientifically found that each one of these creatures has enough venom to kill sixty grown humans. The sting of these dangerous wild animals is extremely painful and in severe cases and lead to cardiac arrest and death within the next five minutes. With the scientific name Chironex Fleckeri, their stinging tentacles can stretch up to the length of two metres.

This species of octopus has the general message, don’t touch me and you’ll not die. Most of the cases of this octopus hurting humans have been recorded when some has tried to touch or move them. They are deadly Australian animals and the effect of their sting varies according to where the person has been bitten. In most cases, it results in death. The worst part is that there is no antidote for the venom of this lethal Australian animal. It is found in the majorly in the South and thus the chances of human contact are high.

These are mostly found in the Northern territories. Very large and smart, these Australian animals have been reported to be found even near the sea though they have a preference to freshwater bodies. It is the largest living reptile in the world and has a reputation to pounce at anything that moves within its range of vision. It just doesn’t attack humans but incidents have been reported about Salt Water Crocodile attacking various wild animals as well, clearly making it a deadly beast of Australia. Hence, it is advised to beware if you live in the north and are visiting a water body.

Another snake tops this list and one of the dangerous wild animals of the world. Around two metres in length, this Australian snake may not be an aggressive one but it sure does know how too properly defend itself. With its fast and accurate strikes, Coastal Taipan is as deadly as any snake found in Australia. The effect of its venom on mammals is prominent but if bitten, the human starts feeling nauseous and the chances of internal bleeding are very high.

Being surrounded by water on all sides, Australia has a high population of sharks. Many shark attacks have been recorded in the country’s history, the Bull Shark is the worst of them. And what makes them more dangerous is the fact that they also have an affinity to freshwater. This deadly beast of Australia has an extremely sharp bite, because bull sharks eat anything including other bull sharks. This lethal Australian animal doesn’t even spare animals. Not even hippos! Unlike many other sharks, Bull Shark on the human attack is very common. We all know sharks aren’t exactly pleasant sort of creatures but Bull Sharks are bound to give you the horrors for life.

Several species of this snake are spread across Australia; however, the Common Death Adder is unique to the Sydney region. Their fangs of these dangerous wild animals are very large and their bite is fatal. So much so that before the invention of an antidote, most of the attacks by this snake resulted in death. Just like many other animal poisons, the venom of this snake is neurotoxic that is, it leads to the loss of control over the voluntary muscular system. This lethal Australian animal depends on camouflage and most of the human encounters occur when someone mistakenly steps on it.

Killing at least one or two Australian’s every year, the honey bee is nothing but a deadly beast of Australia. It requires at least 500 jabs for honey bees to kill a human and that is an extreme possibility. However, it was founded that 3% of the population is allergic to honey bee venom making them easy prey to a small insect. To those who are allergic, a single jab can lead to severe symptoms which can prove fatal. It can result in the blocking of airways and even the blood pressure drops significantly.

Comparatively this Australian animal is small with its tentacles up to one metre in length. Lurking in the seas of north Queensland, this small predator is a deadly beast of Australia and one should always check the water before going into it or you wind up in a hospital. There have been over 70 recorded deaths by this animal. Most of the people are aware of Irukandji Syndrome. The person who is bitten suffers from the feeling of impending doom. The bite of this lethal Australian animal leads to constant vomiting and a feeling like something is drilling in the person’s back. The pain is excruciating. The patients think that they are going to die and are often found begging the doctor for it so that the pain would simply be over.

Along with being home to beautiful beaches, mountains and landscapes, this country is home to a lot of dangerous wild animals. Mentioned above are only a few examples. One should always be on the lookout and should have sharp senses. Animals are important for the environment. However, humans knowing so don’t do anything to save them. Hunting animals is never an answer.

Diverse wildlife attracts a lot of tourists all over the world. Many wildlife sanctuaries and national parks have been opened to safeguard these species. Australia is a diverse country in every possible manner it never lets anyone down. Some people go to this country just so they can see these animals for themselves. However, one should always advise caution and should never mess with something they can’t control or someone who is way more powerful than them.