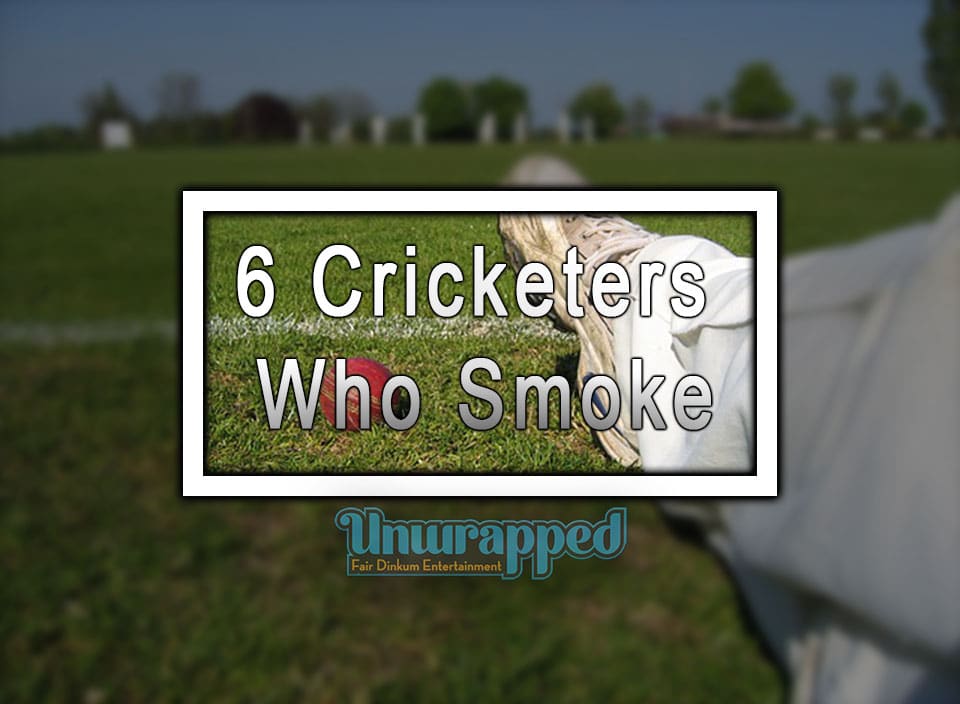 You Wouldn’t Believe These 6 Cricketers Smoke

According to the World Health Organization (WHO), tobacco kills around 8 million people annually. One million of those deaths are a result of secondhand smoke while the larger portion of 7 million is from direct consumption. But unlike other diseases, smoking-related casualties are generally preventable.

Why do people like to smoke in the first place? There are many reasons why a person will decide to start smoking. The most common of all is peer pressure. A lot of today’s smokers took their first puffs on a cigarette during their teen years. Those who got into it as adults pick up the habit at work or from their friends. Social situations, stress relief, and even association to pleasure are some of the other factors why a person will develop a smoking habit.

Even though smoking has no benefits on a person’s health or appearance, this hasn’t stopped countless individuals from enjoying their daily smoke. Interestingly enough, the habit is not restricted to unhealthy individuals, even the fittest athletes have been spotted enjoying ciggies. Sportsmen from golfers, basketball stars, tennis players, UFC fighters, and even cricketers have at some point or another enjoyed nicotine and tobacco.

Surprised to find out that even the most active sportsmen are into smoking? Whether they do it habitually or as a social activity, here are six popular cricketers who have been known to enjoy a good smoke.

Legendary all-rounder Sir Ian Botham began his professional career as a cricket player in 1973 at age 18. While still considerably young, he actually showed interest in the sport at a very early age. As the story goes, he showed an eagerness to play the sport from watching his parents who both enjoyed playing it recreationally, as well as seeing older children participating in the sport.

By age 16 he even left school to pursue a professional cricketing career. And the rest as they say his history. Well known in several circles as a staunch smoker, he has never disclosed when or how he got started on the habit. He did, however, admit in a 1986 interview that his 63-day suspension was the result of getting caught smoking some cannabis. Now long retired from cricket, he is still visible in matches as a commentator and has been seen enjoying cigars on several occasions.

Twenty six year old Tom Curran is a standard fixture in many cricket formats. Aside from playing Test matches, T20s, and ODI games, he also actively plays domestic cricket for Surrey County Cricket Club. This right-arm bowler known for his fast-medium bowling style can also bat with the same hand. Having debuted in the cricket scene in 2017, he has since proven his abilities in many matches. Though he is not often caught smoking in public, Tom has been captured on multiple occasions enjoying a celebratory smoke and some beers.

Currently enjoying his spot as one of the highest-paid cricket players, Aaron is the Australian team captain for limited-overs cricket. An active sportsman who holds the title for having two of the three top individual scores in T20I cricket matches. Aaron, an active domestic player for the Melbourne Renegades and Victoria Surrey is an amazing order batsman and the occasional traditional spinner. Despite his active lifestyle, busy training schedule, and health regimens, this top Indian Premier League cricketer has been spotted many times vaping inside locker rooms and in public.

Gayle entered the world of cricket in his youth. At age 19, young Chris made his debut for the Jamaican cricket team in 1998. It was only a year later that this up-and-coming player joined his first-ever ODI match, followed six months after with his first cricket Test match. Characterized as an aggressive batsman who regularly opens innings for the West Indies, he had slowly risen to the ranks. Now retired from playing One Day International cricket matches, he can still be found playing domestic as well other formats. Universe Boss or The Boss as he has been nicknamed is famous not just for his athletic talents on the cricket field, but he is also loved for his easy-going nature. This offbeat fun-loving cricketer enjoys partying, the attention of his adoring fans, and of course, smoking.

Like his elder brother Krunal Pandya, Hardik also plays cricket internationally. Born on October 11, 1993, he plays in the IPL for the Mumbai Indians, and in domestic cricket for the Baroda cricket team. Best known for his right-handed batting and fast-medium bowling skills, Hardik and his brother learned to play at an early age. The support of their father was instrumental in developing their cricket skills. By ninth grade, Hardik opted out of his education in order to focus more on his cricket career. Though his progress wasn’t as fast as he wanted it to be, he gradually excelled. Kung Fu Pandya as his fans lovingly call him, is an active cricket player in various formats. Many say that his age has led him towards controversies which he has since apologized for. Rarely seen smoking publicly, he has on occasion seen vaping especially in events and celebrations.

Another cricket legend, Shane Warne is a former cricket player who was captain of the Australian national team. Many agree that Shane is one of the top bowlers of all time, throughout his career he received various commendations and awards. Aside from playing in the international cricket scene, Shane was also an active member of his home state domestic cricket team. At the same time, he also played English domestic cricket for the Hampshire team. This well-respected player even acted as both captain and coach when he was part of the IPL team Rajasthan Royals. Right-handed batter, and bowler, Shane has been busy pursuing other interests since retiring from cricket. He is a regular cricket commentator who still enjoys participating in matches every now and then. This rather controversial spinner was often the topic of many sports stories and gossip columns. Regularly seen out partying, Shane enjoyed women, liquor, and smoking.

Effects of Smoking on Athletes Including Cricket Players

It’s hard to imagine health-conscious athletes who follow strict training schedules and diets to have unhealthy vices, particularly smoking. Nonetheless, it is obvious that this unsavory habit is a fairly common activity for a lot of sportsmen. Some even suffer an addiction to this vice. That said, if smoking is already dangerous to the health of less active people, how does it affect athletes who lead somewhat healthier lives? Here are a few ways it can impact even the most active cricket player.

Athletes who smoke are impacted by the effect nicotine has on the heart and circulatory system. Studies have shown that smoking can lead to clogged blood vessels. It was discovered that nicotine ends up as plaque that can cause blockages.

More importantly, when blood vessels become constricted, blood flow to the muscles is reduced greatly. As a result, the less oxygen received by the muscles, the bigger chances of a decrease in muscular endurance. Since cricket is a very high endurance sport, keeping the heart pumping properly is vital. In the past, many deaths in cricket players have been a result of heart failure, whether they are a direct result of smoking, the important takeaway is for players to take care of their heart health.

The muscular system works overtime with sportsmen like cricket players. One disadvantage smoking has for a cricketer is the larger chance of injury it can cause. When the brain, heart, and muscles do not get ample oxygen, a person’s physical and mental sensitivity can drop immensely. This can lead to a cricketer making poor decisions on the playing field, they may end up becoming faint or dizzy while playing, or end up with bad form when executing a move. Exposure to nicotine and tobacco has also been seen to decrease bone density and the human body’s ability to repair ligaments, skin, and tendons. Simply put, any injury that a smoker sustains will take longer to heal.

For any person who smokes, the biggest impact smoking has is on their lung performance. Athletes who smoke can notice a decline in respiratory function. In turn, it affects their stamina and overall performance. Bear in mind, when muscles do not get enough oxygen, fatigue tends to set in faster. Lots of smokers also notice a shortness of breath compared to non-smokers because their body is in need of a cleaner air supply in the lungs.

Just because athletes tend to have regular workout routines and training sessions that are more strenuous than the average person, it does not mean they are exempted from the side effects that smoking has on a person’s health. Though there is no rule restricting players from indulging in cigarette smoking, it is still very much discouraged. After all, nothing really good comes out of smoking.

Is smoking allowed in international cricket?

Smoking or intake of cannabis in any form is prohibited. As per reports, Shehzad failed the dope test due to use of marijuana. A player can be tested by the ICC on any given day in a year. Players’ sample can be collected during a competition or even when he is on a leave.