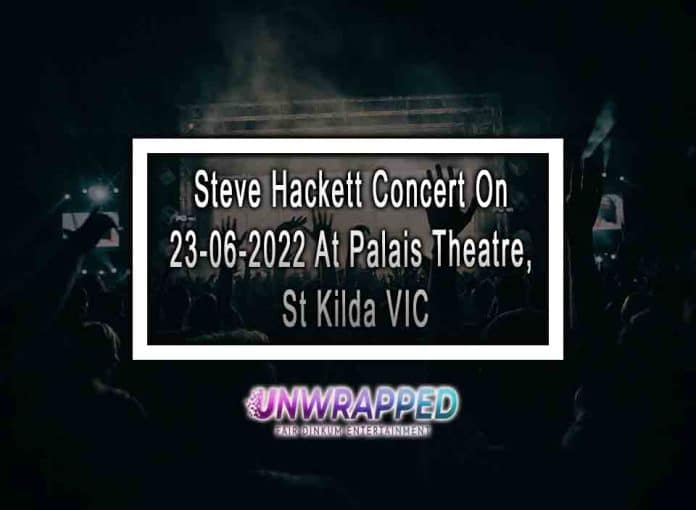 Steve Hackett has announced his Steve Hackett Genesis Revisited – Foxtrot at Fifty + Hackett Highlights tour for 2022, following his most successful solo tour ever. The tour will commemorate the 50th anniversary of Genesis’ seminal album Foxtrot, which was instrumental in establishing the band as a prominent force in British rock in 1972.

Steve Hackett joined Genesis in 1971 and made his debut on the Nursery Cryme album, a financial triumph in Europe but not in the United Kingdom. The band was motivated to explore lengthier songs and enhance their ability to weave compelling storylines after extensive touring by audience reactions. As a result, vocalist Peter Gabriel had more opportunities to indulge in theatrics, which helped the band’s fame rise.

Unless the promoter specifies otherwise, no video, audio, or professional photography is permitted. The venue does not allow alcohol or open drink containers. Standing is prohibited in lounge rows a-d. To prevent long lines, patrons who requested an outlet/venue pickup when ordering tickets should pick up their tickets before arriving at the Palais Theatre on performance night. Included for VIPs: VIP admission (no need to queue), Steve Hackett special meet and greet commemorative VIP laminate limited edition a3 thick cardboard tour poster, a copy of the setlist 2 things autographed by Steve Hackett, and a photograph of Steve Hackett taken with your camera.

Stephen Richard Hackett is an English musician, singer, composer, and record producer best known for his work as the primary guitarist of Genesis from 1971 until 1977. Before departing to pursue a solo career, Hackett contributed six Genesis studio albums, three live albums, seven singles, and one EP. As a member of Genesis, he was inducted into the Rock & Roll Hall of Fame in 2010. In 1975, while still a member of Genesis, Hackett recorded his debut solo album, Voyage of the Acolyte. In 1986, Hackett co-founded the supergroup GTR with Steve Howe, following a string of solo recordings that began in 1978. The group’s self-titled album GTR reached No. 11 on the Billboard 200 in the United States, while the song “When the Heart Rules the Mind” reached No. 20.