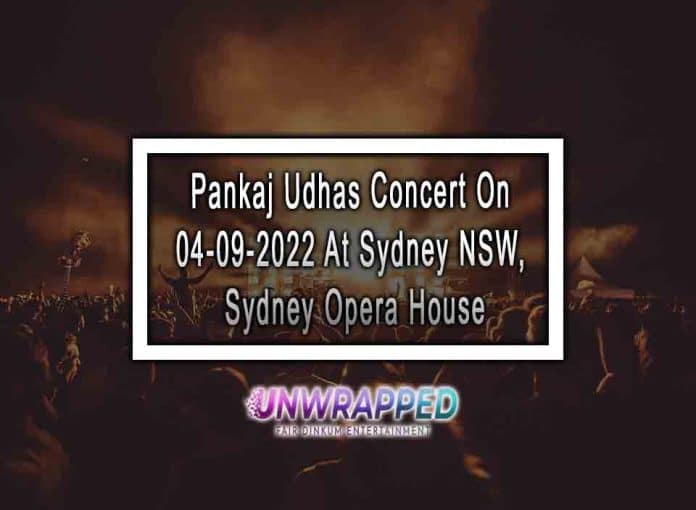 Akash Lodhia proudly presents the Ghazal Maestro’s PANKAJ UDHAS – Live in Concert at the Sydney Opera House. It will be a fantastic opportunity to hear India’s most famous Ghazal singer, whose soulful singing and live performances have made him an idol for millions of music fans worldwide. Leading Indian artists will also perform in this program.

On 4 Sept 2022, see Pankaj Udhas perform Live in Concert at the iconic Sydney Opera House to commemorate his musical milestone. When you come to the Opera House, you will notice several significant improvements that have been made to keep the community safe and are examined and updated regularly following the current Public Health Order. Our priority is everyone’s health, safety, and well-being at the Opera House.

The Ghazel Maestro is Pankaj Udhas, an Indian ghazal singer, composer, and musician Padmashri Pankaj Udhas will mark the 40th anniversary of his musical career with a one-of-a-kind mega concert — the only one in Australia, New Zealand, and Fiji. This will be a fantastic opportunity to hear India’s most famous Ghazal singer, who soulful singing and live performances have made him an idol for millions of music fans across the world. Leading Indian artists will also perform at this programme. On September 4, 2022, come see Pankaj Udhas perform Live in Concert at the iconic Sydney Opera House to commemorate his musical milestone.

Pankaj Udhas is an Indian ghazal and playback singer born in 1951. He began his career in 1980 with the publication of Aahat, a ghazal album, and recorded more songs, including Mukarar in 1981, Tarrannum in 1982, and Mehfil in 1983. After his breakthrough as a ghazal singer, he was requested to participate and sing for Mahesh Bhatt’s film Naam.

Udhas gained even more prominence due to his performance in the 1986 film Naam, in which his song “Chitthi Aayee Hai” became an immediate success. After that, he did playback singing for several Hindi films. As a vocalist, he rose to prominence through albums and live performances worldwide. Nirmal and Manhar Udhas, his brothers, are also vocalists. Pankaj Udhas received the Padma Shri, India’s fourth-highest civilian honor, in 2006.