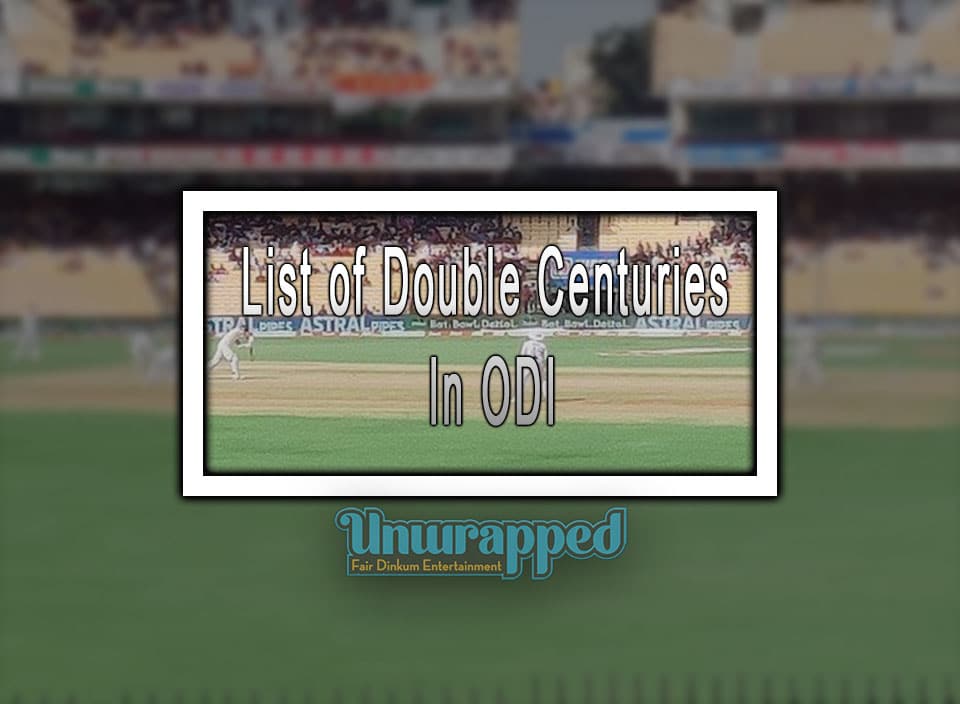 Playing a cricket century in a match is a big deal for every player. Achieving a double century is an even more monumental event. Whenever a cricketer scores a century or a double for that matter, it is considered to be a hallmark moment for a batter and will forever be immortalized in their career statistics.

Centuries occur whenever a cricket player (batter) manages to score a hundred runs or more in a single inning during a match. The whole concept of a century wasn’t prevalent until the tail end of the 19th century when it was becoming an anticipated play. Nonetheless, the earliest known century played was in 1767. During a small match, cricketer John Minshull managed to score 107 runs thereby becoming the first recognized century to be played in a cricket game.

It wasn’t until six years after the first century was made that a cricketer in a top-class match named John Small managed to score his own century with 136 runs. Players for other cricket formats however weren’t as unlucky because runs that qualified as a century or a double didn’t reoccur until the 1800s and onwards. Looking back it was clear that it was such a rarity for even a top player to achieve this feat, even rarer to encounter players that managed to get a double century. For this reason, the accomplishment is truly something worth celebrating and recording for future cricket-playing generations to take inspiration from.

When it comes to the ODI cricket format, getting on the One Day International’s list of cricketers is a dream for a lot of players. Even though getting on the list is challenging, it has not discouraged cricket athletes from wanting to conquer a double-century milestone. Aside from setting it as a goal, attaining a double century requires a lot of skill, patience, energy, endurance, and incredible strength. Currently, there are only a total of eight cricketers who have succeeded in appearing in the Double Century List for the ODI format.

Out of those eight players, only one cricketer has managed to record a double century to his name. Cricketer Rohit Sharma managed to score a double century not just one time, but three times so far. His achievements are currently unmatched but this does not mean that the other seven cricketers are not just as worthy of recognition. Besides Sharma, there are several men and women cricket stars who have gotten a spot in this distinguished spot. These are the cricket sports stars who have scored 200 runs in their ODI matches.

Former Australian national women’s cricket team captain, and international cricketer Belinda is one of the fortunate players to have made her mark in the cricketing world. This talented sportswoman scored a double century that has surprised fans and fellow players. Her amazing 229 runs in a game against Denmark in 1997 have earned the admiration of many. This role model to many aspiring young cricketers was instrumental in many matches won by the national team throughout her 14-year professional participation.

Jamaican native Chris Gayle’s record 200 run or more popularly known as the highly coveted double century was a result of his energetic and explosive performance in the ICC World Cup. Regarded as one of the best batsmen in the history of Twenty20 matches, Gayle is in fact a top-notch ODI player who has a 146.25 strike hit. Like many cricketers, he was able to achieve his centurion dreams, and at the same time becoming a record holder as one of the select number of cricketers to have gotten an impressive ODI score.

An opening batsman for the New Zealand international cricket team, Martin played one of his best games. This monumental game against a West Indies team in 2015 led to him batting at the opening and scoring with 163 balls, a total of 237 runs. This kiwi batsman executed a spectacular 145.39 strike rate which is a leading score in the quarter-finals of the World Cup. At the moment, Martin’s double century win has him as the second-highest recorded ODI player.

Women cricketers are only gaining traction and worldwide interest in recent years. The women’s league, although not yet at par with the men’s division, continues to produce the best sportswomen in the cricket industry. And when female athletes manage to make a mark in a male-dominated sport, people take notice. In this instance, another female creating a name for herself is Amelia Kerr. She is just one of the two women who managed to make it to the list of double centurion players in the ODI format. Kerr holds the global record by managing 31 fours and 2 sixes which gave her a run score of 232.

Holkar Cricket Stadium was the venue of an ODI cricket match where Virender Sehwag reached his goal to become a leading athlete and double century titleholder. Viru as he is fondly called by fans scored a run of over 200 miles. Thanks to his fruitful attempt and resilience in the sport, his 219 total run during the 2011 cricket match ensured that he got awarded with a double centurion milestone. What makes this West Indies cricket match even more interesting is his 147 strike rate where he batted 25 fours, and 7 sixes. Highly skilled, Sehwag is the second Indian cricketer to hold a spot amongst the ODI double century stars.

You cannot talk about ODI centurions without mentioning Rohit Sharma. A legend in his own right, he further cemented his place in the cricket hall of fame by being the only player who has managed to score not just one title but three double century titles – thus landing him with the nickname “Hitman.” Aside from this, Rohit also holds the position as the first person globally to have the top score for an individual in the ODI. Rohit has smashed record after record with his revolutionary approach and phenomenal cricketing abilities.

Sachin Tendulkar aka the God of Cricket

Every athlete can only hope of carving a name for themselves that not only leads to a successful career but one that is also paved with well-earned commendations. One such athlete from the cricket world managed just that. Sachin got his moment when he scored his first double century on February 24, 2010. Having annihilated the cricket team from South Africa, he was given the prestigious moniker  “God of Cricket.” He further impressed those who followed his career closely when he was able to score his double century by hitting under 150 balls (147 to be exact). At the same time he got his ODI double century title, Sachin was also bestowed the title “man of the match.” He may not have as many runs as the other names on this list, but his perfect 200 was more than enough to land him the centurion record.

Last but not the very least on the list is Pakistani cricket double century champ, Fakhar Zaman. The victory came to Fakhar in the form of a 210 run score. The date was July 20th, 2018 when his unbeatable technique and strategic gameplay placed his name in the book for world record holders for ODI double centurions. Although Pakistan had been producing really talented cricketers, none had managed to put the country on the map, that is until Fakhar and his double century record came along. This was not just a win for Fakhar but a win for his native land as well.

How do ODI Cricketers Score a Double Century?

Cricket may have been called a “gentleman’s game” during its early inception but it does not make the sport easy.  Much of a cricketer’s success relies on their dedication to the sport. It  requires working on improving abilities and training to be the absolute best. With so many talented cricket players, standing out is difficult to do even in a single format. ODI players have to work on many components even before attempting to get at least one double century during the span of their career.

To start off, players are expected to put the team’s overall success rather than just aiming to get a score that is a 200 or over. A cricket must work with the team to ensure the game is well-strategized and that their overall interest in a match is not compromised. Simply put, the glory of a double century comes from playing the game with the team and not just a one-man person’s attempt to get the record for himself.

Who has the most ODI double centuries?

The “Hitman” Rohit Sharma has the most number of double centuries in a professional cricket match. He currently holds the record with three double century titles under his belt, for the ODI cricket format. The first of all titles were gained during a 2013 match his team had against Australia. The second and third records came from a match with Sri Lanka, one occurred in 2014, and the next was three years after.

Are female cricketers able to score a double-century title in ODI?

Women’s cricket is a tough sport to be in. That said, women, cricketers can perform just as well as the men, so much so that two out of the eight double century ODI cricketers are successful sportswomen. Amelia Kerr, age 22, hails from New Zealand, while Belinda Clark from Australia holds the other record.

How many double centuries are there in the ODI format?

To date, there are a total of 10 double centuries that have been scored. Of the 10, three are contributed by Rohit Sharma. And half of the 10 is made by Indian cricket nationals. Interestingly enough, matches that include a batsman scoring a double century result in the player’s team winning the match.

Which countries have the most ODI double century title holders?

India leads the pack with three Indian cricket players who have successfully ranked as double centurions. This is closely followed by New Zealand with two players.

How is a double century counted?

Which cricketer scored the first-ever double century in the One Day International?

In a match against South Africa, Sachin Tendulkar who also goes by the nickname “Master Blaster” was the first ODI cricketer to have scored a double century. This glorious event happened on February 24, 2010. Sachin managed his first-ever perfect 200 runs with a 147 strike hit.

How difficult is it to get featured in the ODI Double Century list?

Scoring a double century or making it on the list is not an easy feat. In the last 50 years, only a handful have made it into the ODI hall of fame. This is because it is important to maintain a good gameplay balance, one that does not put any pressure on the cricket player and at the same time sticking to a strike rate that is a minimum of 130.

Is there a correlation between strike rates and the end score of double centurions?

Data shows that there is indeed a very high link between a player’s strike rate and his or her end score.

Did Virender ever hold a position in his team at the time he got into the Double Century list?

When he managed a 200+ run during a match with a West Indies team, Virender was at the time the Indian team’s captain.