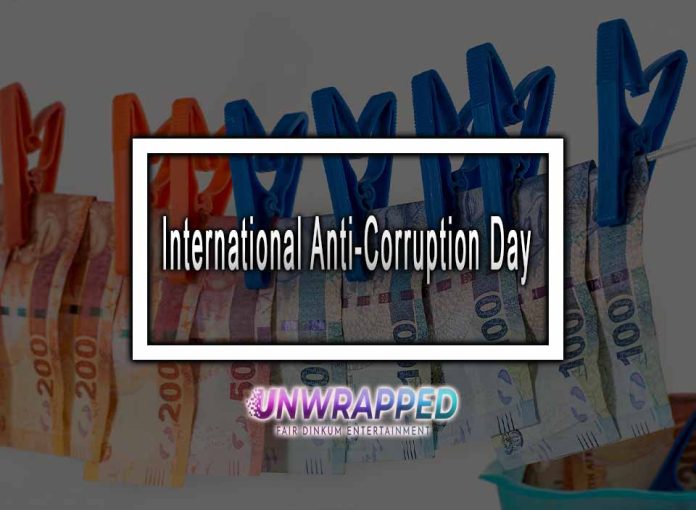 International Anti-Corruption Day is celebrated every year on 9 December. Corruption might be one of humanity’s greatest tragedies since it is continually challenging to prevent, resulting in an ever-increasing gap between the affluent and the poor. Moreover, it is impossible to hold elected officials accountable for their actions because of bribes. Politicians hire all of their buddies, police officers work with drug dealers, and anyone who tries to speak out is either bribed into silence or “mysteriously disappears.”  Do you know? Iraq, North Korea, Venezuela and Somalia e are just some of the world’s most corrupt countries.

Corruption has been around since the dawn of civilization. The Code of Hammurabi of Babylonia and the Arthashastra in India are some of the earliest anti-corruption documents. These writings discuss bribery among state and law enforcement agents. In the 19th century, the idea of public interest and welfare began to take root in Western culture, and it gave the growing corruption in professions like the bureaucracy more attention. As a result, an increasing number of people realized that corruption was a bad habit and behaviour that significantly impacted society.

Additionally, Transparency International created the Corruption Perception Index (CPI) in 1995 to rate nations based on their perceptions of corruption in various industries and behaviours. There are presently 180 nations represented in the index. The World Bank’s Worldwide Governance Indicators, for example, collect corruption statistics from other organizations.

To combat corruption, we can all do our bit by speaking up when we’re the victims of corrupt acts and acting ethically and transparently when we’re the beneficiaries of such practices. Corruption levels throughout the world have been documented by Transparency International since 1995. It’s worth looking at which nations have performed better or worse over time and how that compares to the political climate in those countries.

The World Bank also provides additional indexes, such as the Worldwide Governance Indicators. The UN has started an anti-corruption initiative in the past two years under the slogan “Recover with Integrity”. Corruption in the healthcare industry is a particular concern. They have a separate webpage where you can find out more about this.

Many people have dealt with corruption in our business or government transactions, but we may have disregarded its relevance to “get things done.” Remember that you don’t have to tolerate these behaviours and that you may speak out against them on this day, which is why we celebrate it.

To help us understand how widespread corruption is, the United Nations and other organizations have developed a variety of materials. We learned ethical behaviour as children, but we may have forgotten about it amid the daily grind and commotion. Right now, it’s time to revisit and even rediscover those teachings to direct our actions better.

Which country has the maximum Corruption Perception Index?