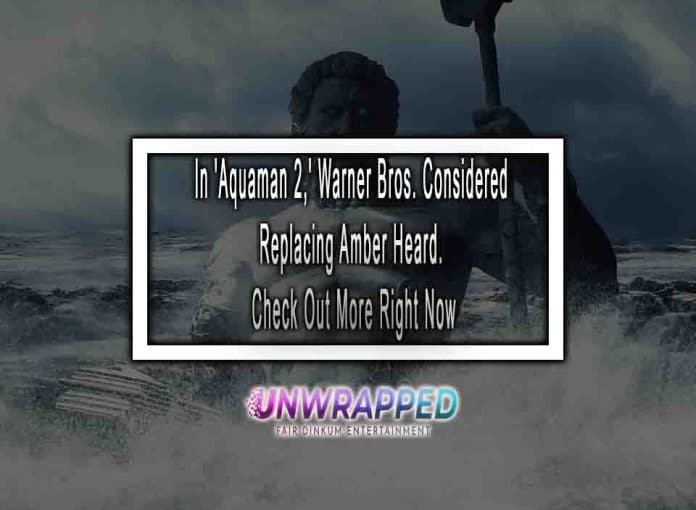 In Aquaman, Was Amber Replaced?

The head of DC Films testified Tuesday that the company explored replacing Amber Heard as the lead of “Aquaman 2” because she lacked chemistry with Jason Momoa.

Hamada gave a video deposition in Depp and Heard ongoing defamation trial on Tuesday, May 24. Depp’s team enlisted him as a witness to contradict some of Heard’s own testimony from last week. Heard testified at the time that she struggled to keep her job and had to fight to keep her role as Mera — Mamoa’s Aquaman’s love interest — for the Aquaman sequel amidst a barrage of negative press following her divorce from Depp, the temporary restraining order she obtained against him, and the allegations of abuse Depp levelled against her.

Hamada testified that he discussed the lack of chemistry between Heard and Mamoa with Aquaman producer Rob Cowan during the filming of the 2018 picture. The studio was so concerned, according to Hamada, that it delayed picking up Heard’s sequel option while it explored recasting her.

Hamada observed that Heard’s performance in Aquaman was well-received in early test screenings despite the chemistry concerns. He was also asked if there were any problems with Heard during the sequel’s development. He said, “From what I gather, the production went extremely nicely.”

Hamada was also asked to reply to Heard’s second accusation that her involvement in the sequel had been considerably reduced in addition to fighting for her job in Aquaman 2. On the other hand, Hamada revealed that Mera’s position in Aquaman 2 has already been chosen. According to Hamada, the new film was conceived as a “buddy comedy” between Aquaman and his half-brother, King Orm, who is played by Patrick Wilson.

In Depp’s defamation trial, the jury heard that Amber Heard only maintained her job in Aquaman because its star Jason Momoa and the film’s director battled for her.

According to Arnold, Heard’s career was harmed after Depp’s lawyer Adam Waldman accused her of fabricating a ‘hoax’ against him. Depp’s admirers started a “negative social media campaign” against Waldman, using her statements as hashtags. There was also a petition to have Heard removed from Aquaman 2 that received over 4 million signatures.

You May Also Like: Over Heard’s Abuse Claims, Disney Fired Depp From The ‘Pirates Of The Caribbean’

Stay Connected
41,936FansLike
5,681FollowersFollow
816FollowersFollow
Previous article
In A Texas School Shooting, A Gunman Murders 19 Children And 2 Adults
Next article
Everything We Know About The Film Crimes Of The Future