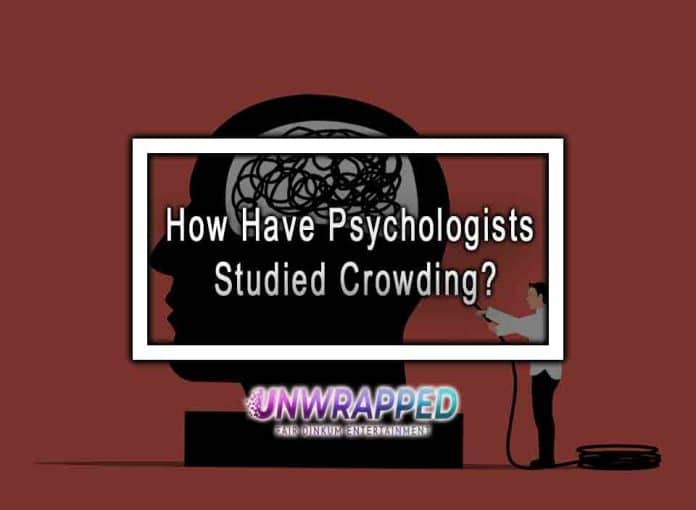 Have you ever felt irritated or stressed when people get too close during a train ride? If you take the train to go to work, the morning rush isn’t exactly what you look forward to every day. Hence, a feeling of wanting to withdraw yourself from the sea of commuters is the only thing you want to do. If so, you’re not alone. It’s not because you’re growing to hate people or your colleagues. These are normal responses to crowding, a psychological tension produced in environments with high population density.

The world’s global population is growing every day while the land and many other resources remain limited or are declining. This problem has always been in the minds of psychologists. They have spent years of speculation and research to find out whether population density has serious social and psychological consequences. In this article, we will present the in-depth research they have done to study crowding.

Interesting: Why Are Psychiatrists Called Shrinks?

In its simplest definition, crowding means to make someone feel uneasy by standing too close to them or by watching them all the time. There are several instances or situations that which crowding may happen. Shopping centers, trains, and buses are only a few examples wherein people may experience crowding.

American Psychological Association further defines crowding as “psychological tension produced in environments of high population density, especially when individuals feel that the amount of space available to them is insufficient for their needs.” It has been said to have damaging effects on one’s mental health and may result in poor decision-making or performance of complex tasks. Thus, your work may be affected as well as your interactions with your co-workers.

For some people, crowding may be an everyday experience, especially in developing countries. Of course, to find solutions to this phenomenon, psychologists must start by identifying the problem. Thus, let’s see how they’ve studied crowding.

According to Kalb & Keating (1981), “Two measures of perceived crowding are used interchangeably by crowding researchers: one assesses how crowded people feel and one assesses how crowded people rate a setting.” Environmental psychologists study how human behavior and the physical environment interrelate. They believe that crowding is a phenomenon that illustrates how the physical environment can affect human behavior.

Soon enough, several studies have emerged to investigate the effects of crowding on human performance. And, these are the tools they used to study crowding:

Density is typically indexed as people per room or people per square foot. More external density measures like people per acre are less relevant for human well-being. Living and working spaces matter most because of the more immediate experience with the close presence of others. The distinction between psychological and physical perspectives on crowding explains why a high-density social event like a party is enjoyable. However, a high-density living or work space can be negative. In short, when you need more space and can’t have it, you experience crowding.

Some researchers have used vital signs as indicators to see if participants had any changes in their vital functions after experiencing crowding. May it be a controlled group or an experimental group. In Evans’ (1979) study, crowded subjects in comparison to uncrowded controls exhibited significant elevations in blood pressure and pulse rate and manifested additional behavioral indices of stress. It included greater behavioral stereotypes, increased defensive postures, more remarks toward the door of the experimental room, and self-reports of greater discomfort and hostility.

One of the ways researchers mark whether a situation is stressful or not is to use physiological measures like stress hormones (e.g., cortisol, and epinephrine). Usually, college students and community research studies provide evidence that crowding can cause physiological stress. Nonverbal indicators of stress are seen, such as fidgeting, adjusting clothes, hair, and jewelry, and often avoiding eye contact.

These are the measuring tools that researchers have used. To tie them all together to make a cohesive result, they have also used some of these data collection methods:

The most common reaction to crowding is stress, especially if it’s an important space like home. People typically have negative feelings when it’s crowded. Often, they feel anxiety and frustration about restricted behavioral options. The choices of what, where, and when they do things are constrained. If they experience these restrictions every day, crowding may lead to feelings of helplessness wherein they start to question their abilities to effectively manage the environment.

Some studies in India and in the United States have found that children and adolescents who live in more crowded homes and is likely to give up sooner than those living under uncrowded conditions. Since they are independent of socioeconomic status and are less likely to persist on challenging puzzles, it negatively impacts their attitudes about their future.

People who experience crowding change how they interact with other people. Two results are common: Most likely, they withdraw from others and create more psychological space when physical space is limited.  They also become more irritable and potentially aggressive.

Studies found that college roommates, who moved in together, that the number of people per room in their apartment was unrelated to how much social support they perceived from their housemates. After 6 months of living together, more crowded undergraduates felt more withdrawn and had less social support from their roommates. These same college students were later brought into a laboratory to interact with a stranger, and they exhibited this same more socially withdrawn style.

Crowding is an everyday phenomenon in which human behavior and its physical environment influence one another. The distress and social withdrawal caused by repeatedly getting exposed to crowding may have negative impacts that last a lifetime. It may ruin students’ grades or make professionals underperform in their work. Hence, researchers have suggested ways to mitigate its effects with the potential role of architecture and design in crowding.

There’s evidence that having your own space in your home where you can be temporally alone can offset some of the negative impacts of crowding. This is a challenge to developing countries.  Urban planners and architects must know how to combat crowding to help their communities live and perform at their best.

Also see: How Do Psychologists Decide What Is Abnormal?