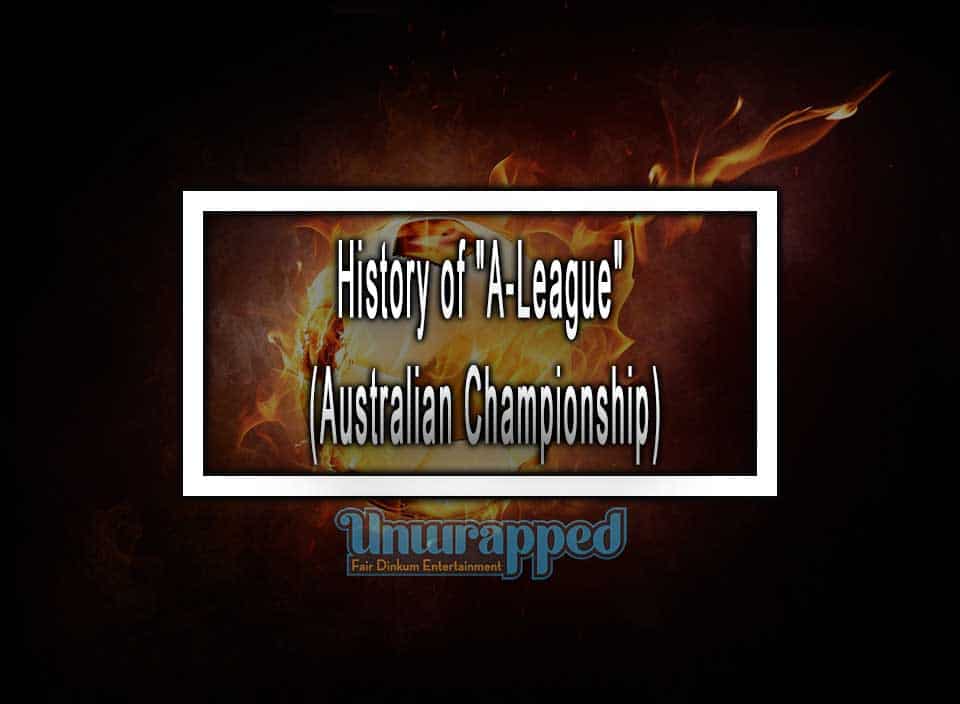 Every glorious championship has roots running down to a history of back-breaking challenges and exercises of countless hours.

A-league” (Australian Championship) is no exception. Its achievements naturally utter a wow factor. But this championship has been built upon the sweat and blood of great players.

“We are not makers of history; we are made by history.”

To understand the history of today’s top professional A-League (Australian Championship), it is important to reflect some light on the first inhabitants of Australia. They used to play ball games with a possum-skin ball.

Nineteenth-century arrivals brought their taste of ball games. They played ball games for money and other different prizes.

In 1859, the local set of extant rules was written for the Melbourne Football Club. These rules shared a sheer similarity with the Cambridge University rules of 1845, and John Hope’s club in Edinburgh of 1824.

Dalmahoy Campbell and Francis Stephen are prominent figures in the history of Australian football. In 1850, they organized an eleven-a-side game in Melbourne. These games succeeded over the years. It came out to be what we today know as codes. The roots of the local football code grew so strong that no migrant could challenge it. They used to play an eight-hour day on Saturday afternoons attended by a large number of spectators.

Years from 1880 to 1909 marked significant changes in the development of A-League Australian football. Several matches were conducted in Tasmania and South Australia.

In 1880, John Walter Fletcher contributed to expanding football by organizing a series of matches in Sydney.

In 1883, Melbourne hosted the first inter-colonial matches between New South Wales and Victoria.

Even though Australia nurtured the game and provided the means to execute it.

The game earned its recognition as a migrant game because the Scots and Northern English named their clubs after their heritage rather than the land that nurtured it.

Every colony established its leagues, and those in the capital cities became dominant.

Harry Dockerty helped in setting up a local league. It marked a great revival in Victoria in 1908. He presented the Cup, and his name has been engraved on it to this day. In 1905, a team from New Zealand was hosted by a Sydney metropolitan competition which was the strongest of that time. Association football had strong centers in mining areas in all colonies and states.

In 1911, the first national organization was formed. But soon the thriving game was hit by WW1. As a result, clubs lost their players and a major halt was seen.

In 1911, Commonwealth Football Association was formed. In 1922, it secured the first international matches for the Australian Men’s team. In 1923, the ‘Football Association’ (Australia) emerged as its new name before its 1925 England tour.

It was replaced by ‘Australian Soccer Football Association (FSFA). It operated for almost 40 years. It also received FIFA membership in the June of 1956.

After 4 years, it was suspended from FIFA for poaching overseas players.

The ‘Australian Soccer Federation’ (ASF) was formed in 1961. After paying hefty fines, it was admitted to FIFA in 1963.

In 1966, Australia joined New Zealand and created the ‘Oceania Football Federation’ now known as Oceania Football Confederation. Fiji and Papua New Guinea also joined them and together they became the four founding members. The ASF changed its name to ‘Soccer Australia’ in 1995.

In 2003, Crawford Report recommended the reconstitution of the governing body with an interim board. The board was headed by prominent businessman Frank Lowy. After three months, Soccer Australia was placed into liquidation. As a result, the ‘Australia Soccer Association’ (ASA) was created.

In 2005 A-League Men was established (successor to National Soccer League). It is the highest-level professional men’s soccer league in Australia and New Zealand.

It was comprised of eight teams. Each is taken from the following cities: Sydney, Melbourne, Brisbane, Adelaide, Perth, Newcastle, a New Zealand team, and a remaining either from Sydney or Melbourne.

A-League history is full of struggles and big wins. Yet it maintains a glorious stage. The 20th Century stands a witness to its zeal as Mick Malthouse says,

‘The meek may inherit the earth –

but they will never win games of football.’

Stay Connected
52,679FansLike
5,667FollowersFollow
828FollowersFollow
Previous articleHow Can You Find Free Get Kush Resources With Weekly Deals?
Next articleWhat is the Best Device for Gaming in 2022?