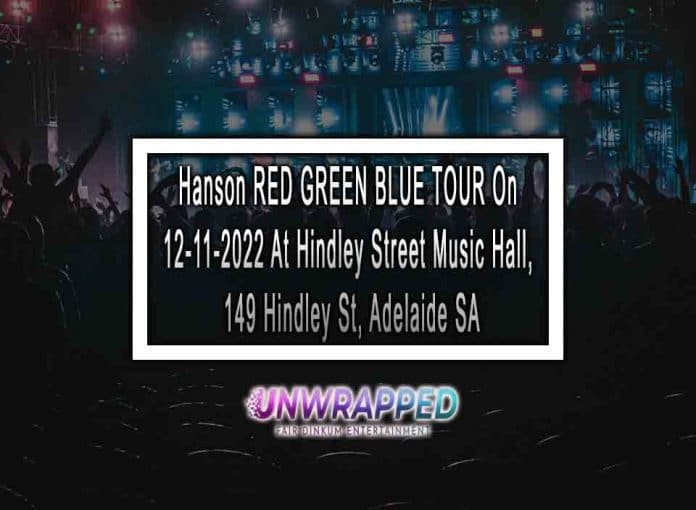 The American pop-rock group HANSON will stop in Australia and New Zealand in November as part of the RED GREEN BLUE 2022 TOUR, Chugg Entertainment and Frontier Touring are thrilled to announce. The tour is an excellent opportunity for us to catch up with our global fans and commemorate three decades of music. We are eager to reunite with our Australian and New Zealand fans and perform live once more.

With their Middle of Everywhere World Tour, HANSON celebrated its 25th anniversary in 2017, visiting Australia and New Zealand. They did this to honor their two decades of music and the incredible community of old and new fans who have supported them throughout their career. During their String Theory Tour, which they most recently completed in Australia in 2019, they performed on stage with a symphony orchestra thanks to a unique partnership with Academy Award-winning arranger David Campbell.

Brothers Isaac and Taylor Hanson (guitar, vocals, bass, and piano), together with Zac Hanson (keyboards, vocals, and percussion), are members of the American pop group Hanson (drums, vocals, piano). Dimitrius Collins on guitar and Andrew Perusi on bass have been performing live shows and touring with the group since 2007. They are most known for the 1997 hit song “MMMBop” from their first album, Middle of Nowhere, released through Mercury/Polygram Records and received three Grammy nominations.

The band was transferred to Island Def Jam Music Group after the group’s original label, Mercury Records, amalgamated with its sibling labels. Island Def Jam and the band split after one album was released on the label. In addition to having three US Top 20 albums, Hanson has sold more than 16 million records globally. They have eight UK Top 40 hits and three US Hot 100 Top 20 songs. With the help of 3CG Records, the band now releases music independently.