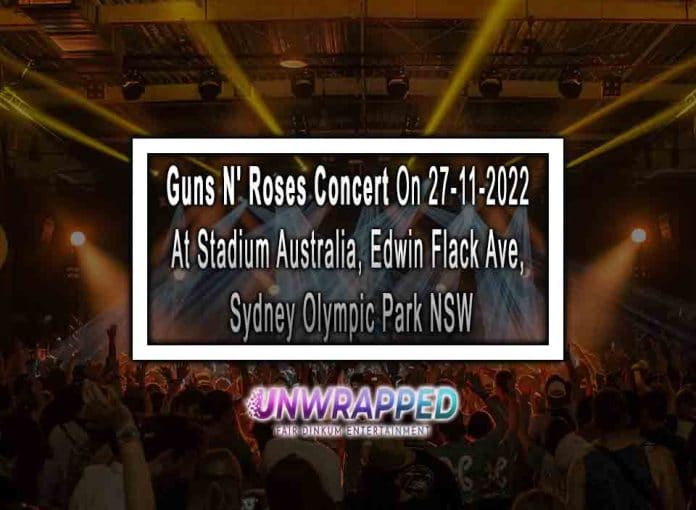 On Thursday, 24 Nov 2022, Guns N’ Roses will perform at the Metricon Stadium in Gold Coast as part of their Larger-Than-Life Australian Tour. Fans no longer need to drive to Brisbane or across the state to witness their favorite “Gunners” in person.

It is a first for the Gold Coast. Guns N’ Roses will begin their tour in Perth’s Optus Stadium on 18 Nov and continue to Brisbane’s Suncorp Stadium and the Gold Coast’s Metricon Stadium before wrapping up on 24 Nov. The band’s 6-city Australian tour continues on Saturday, 3 Dec, at the Melbourne Cricket Ground after stopping in Sydney on Sunday, 27 Nov, Adelaide on Tuesday, 29 Nov, and Sydney on 28 Nov.

Guns N’ Roses is an potential American hard rock band founded in Los Angeles, California, in 1985. Axl Rose on vocals, Slash on lead guitar, Izzy Stradlin on rhythm guitar, Duff McKagan on bass, Steven Adler on drums made up the band when they signed with Geffen Records in 1986. The top 10 songs “Welcome to the Jungle,” “Paradise City,” and “Sweet Child o’ Mine,” the band’s only number-one Billboard Hot 100 hit, helped Guns N’ Roses’ first album Appetite for Destruction (1987), which debuted at number one on the Billboard 200 a year after release.

Rose, Slash, McKagan, Richard Fortus on guitar, Frank Ferrer on drums, and Dizzy Reed and Melissa Reese on keyboards make up the current line-up. The album is currently the eleventh-best-selling album in the United States and has sold almost 30 million copies globally, including 18 million copies in the US. The top 5 smash single “Patience” was featured on their following studio album, G N’ R Lies (1988), which peaked at number two on the Billboard 200 and sold 10 million copies globally. Use Your Illusion I and Use Your Illusion II, both concurrently recorded and released in 1991, debuted at positions two and one on the Billboard 200, respectively, and have sold 35 million copies worldwide.

Due to Covid-19, TEG DAINTY today that the huge Guns N’ Roses Australian tour would now take place on new dates in November and December 2022. The largest stadium rock tour of 2021 will now occur in the summer of 2022. Purchased tickets are still valid for the below-listed rescheduled dates, and ticket holders are not required to take further action.

Band’s onstage connection was obvious during Guns N’ Roses’ Not In This Lifetime stadium tour of Australia, which was the first time Australian fans had seen Axl, Slash, and Duff together since 1993’s Use Your Illusion tour. The most extensive rock stadium tour of 2022 is expected to be GNR’s 2022 Australian tour. All aboard the Nightrain for what looks to be a raucous celebration of the human spirit’s indomitable energy in Paradise City!

When is Bello Winter Music Festival 2022

When is Anzac Day Commemoration Committee 2023