Marine Le Pen has established herself as Frances Donald Trump and the UK’s Nigel Farage, anti-establishment pro individual freedoms and national values. Le Pen rallying call can be heard far and wide NATO exists only ‘to serve Washington’s objectives’, and not many can argue a strong case otherwise. Furthermore, Le Pen during a recent interview with a Greek newspaper has confirmed if backed at the ballot box, she will listen to the will of the people and hold a Brexit-style referendum.

France has had one hell of a year, Le Pen’s policy of managed migration, border controls and deportation of foreign criminals has resonated with many in France. While the ever-increasing bureaucratic burden imposed by Brussels, along with an increasing democratic deficit within the EU has given Le Pen’s Euroscepticism significant validity.  Her views are made very clear in a recent interview with Dimokratia:

“The people must have the opportunity to vote for the liberation from slavery and blackmail imposed by technocrats in Brussels to return sovereignty to the country.”

Both Trump and Farage have argued strongly for normalisation of ties with Russia, arguing the need to reduce the NATO footprint on the doorstep of the Bear. Le Pen’s views align well with the centre-right rebellion occurring in the UK and USA. She has openly called for closer ties with Russia and heavily criticised the NATO encroachment into Eastern Europe. Le Pen stated that she would take France out of NATO if she became president because, as she said, its continuation is no longer needed. Le Pen’s words:

“It was established when there was a risk from the Warsaw Pact and the expansionism of the communist Soviet Union,”

“The Soviet Union no longer exists, and neither does the Warsaw Pact. Washington maintains the NATO presence to serve its objectives in Europe.” (Le Pen) 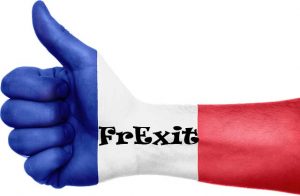 On migration, Le Pen has made it clear that anyone who has entered France without any legal basis should be deported in accordance with international law. This puts her at huge odds with Angela Merkel who is actively encouraging mass migration to the EU. She clearly acknowledges that her nations and indeed Europe’s resources are finite. Therefore accommodating unlimited unskilled migration from third world countries is not compatible with continued prosperity that the western nations have fought so hard for.

“I am against the policy which would promote the entry of immigrants into Europe, which cannot accept them … this tsunami of migrants should be limited. Europe does not have the power to ensure they all find work and opportunities to enrich themselves. Immigrants are illegal since once they set foot on European soil … they have violated the law. They must be sent back to their homeland. “

Le Pen has the opportunity to give France a global voice, one of sanity and putting the needs of her countrymen over that of others. She has undoubtedly distanced herself from her father’s far-right legacy. Should she continue with sound conservative politics, solidifying herself and her party’s position to the centre-right of politics, then its possible Le Pen may just be Frances, next president.

Also See : Can Australia defend itself Without US Support?

Some Perspective on the North Korean Problem