Free Speech R.I.P. – Except for the Rich 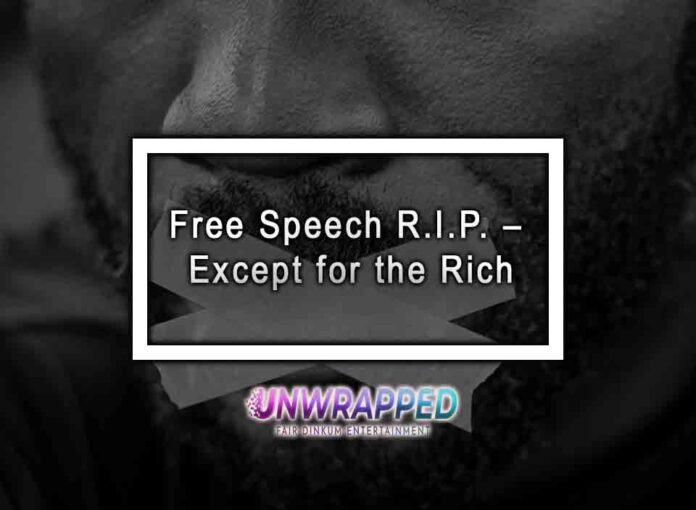 Sounds a bit dark, but we are here for the truth and nothing but the truth. So, why are we, the ordinary people, always silenced, and the rich can say and do whatever they want? Find out below!

Yes, as we mentioned in many of our previous articles on the topic of free speech, it’s basically dead. But only for us. How come Elon Musk, for example, can say whatever he wants on Twitter (even before he bought it)? He even said that there is no third gender. And that’s fine – we’re all for freedom of speech. But if one of us “mortals” tweeted something like that, we would get cancelled immediately. And Twitter would probably ban us just like it did Donald Trump and many others who don’t fit in with their agenda. So, why does he, or any other rich person, gets to have that freedom, but we don’t?
Well, it’s pretty simple. They have power, unimaginable amounts of money, influence, and connections with high-ranking people, including politicians and C.E.O.s of big companies. So, not saying this as a fact, of course, but they are almost above the law and can basically do whatever they want. So, they have it all. You, my friend, don’t. It’s that simple. It is both sad and hilarious at the same time.

What’s worse, we reinforce their power by using their products and services. We all use Amazon and Apple, we buy Tesla cars, use social networks, and so on. However, people who are in charge of all these things made it, so we don’t have a choice. We have to buy their stuff and use their services because there are no alternatives. And when there are alternatives, they’re much harder to get, and we’re too lazy to leave our comfort zone.
Now, is there anything we can do about this? Can we get the same freedom as them? Yes, we can. We just need to get super rich. Easy, right? So, not trying to depress you all here, but I don’t think that there’s much we can do except go along with it and simply mock them in our private life. Maybe someday, in the far future, this will change, but none of us will be here to witness it, so we might as well just accept it and hope that the next generations will make some difference. Probably won’t be Gen Z. But maybe the next one, though.

What Does The Woke Movement Want from America?