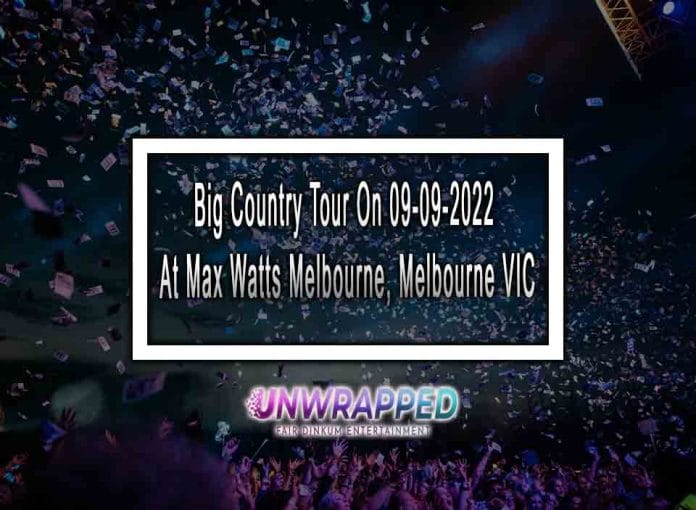 In September 2022, Big Country, the iconic Scottish Celtic rock band, will return to Australia and New Zealand for an ultimate greatest hits tour. The vast country brings its distinctive Celtic rock and chart singles back to Australia with songs like – in a big country, look away, fields of fire, wonderland, and chance – with a career spanning over 40 years and nine albums. Big Country was founded in 1981 in Dunfermline, Fife, Scotland, and has maintained a cult and devoted fanbase for decades.

Scottish folk, new wave, and alt-rock are blended with a guitar-driven sound, bagpipes, fiddles, and other traditional folk instruments in the band’s sound. The big country had great worldwide success in the 1980s, garnering two Grammy nominations and rivaling fellow Celtic big-anthem bands u2 and simple minds for a period. In 2018 and 2019, the band toured Australia and New Zealand with great success, and the demand for additional gigs has been tremendous.

“Harvest Home,” recorded and released in 1982, was Big Country’s debut hit. Although it did not chart in the United Kingdom, it was a moderate hit. “Fields Of Fire (400 Miles)” was their following song, which entered the Top Ten in the UK and was quickly followed by the album The Crossing. The album was a big hit in the United States (Top 20 on the Billboard 200), thanks to the track “In a Big Country,” which was their lone Top 40 hit in the country. Adamson and fellow guitarist Watson used the MXR Pitch Transposer 129 Guitar Effect to generate the song’s extensively manufactured guitar tones, strikingly evocative of bagpipes. The band’s usage of the e-bow, a gadget that lets a guitar sound more like strings or synthesizers, also contributed to the band’s distinct sound.

Big Country is a Scottish rock band founded in 1981 in Dunfermline, Fife. The band built its guitar-driven sound to resemble the sound of bagpipes, fiddles, and other traditional folk instruments, and their music included Scottish folk and martial music traditions. Although the band’s fame peaked in the early to mid-1980s, it has maintained a cult following for decades.

Butler and Brzezicki were called in to perform on “Harvest Home” under the moniker “Rhythm for Hire.” The event was in the Glen Pavilion in Dunfermline, and they used the CBS Studio samples in an interview with BBC Radio Scotland. In February 1982, the band performed two live shows with Alice Cooper’s Special Forces tour in Brighton and Birmingham. Adamson and Watson immediately saw their chemistry and extended an open invitation for them to join the group.