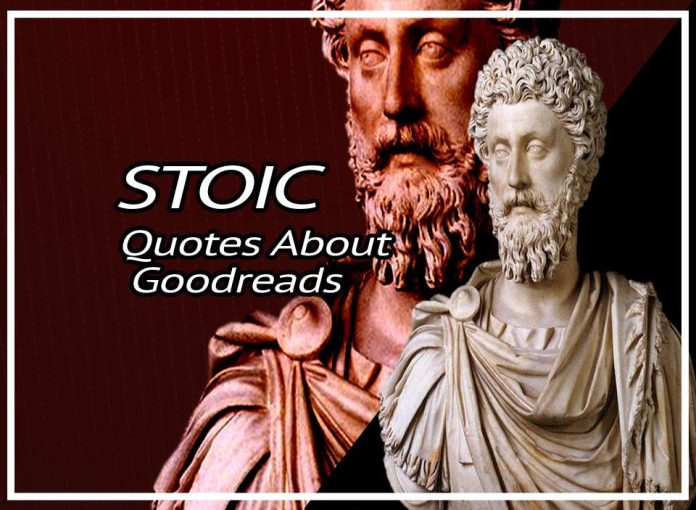 Best Quotes on Goodreads from Stoicism

As a practicing Stoic, I have used many quotes on Goodreads to help me, inspire me, or keep me sane. I hope you find some gain and drive in some of Stoicism’s finest quotes on Goodreads. Developing peace of mind through confidence in one’s abilities is what Stoicism is all about and knowing that this is ancient Goodreads, along with applications by modern great, you know the Stoic beliefs stand up.

“It is not the man who has too little that is poor, but the one who hankers after more.”

“What really frightens and dismays us is not external events themselves, but the way in which we think about them. It is not things that disturb us, but our interpretation of their significance.”

“Nothing, to my way of thinking, is a better proof of a well ordered mind than a man’s ability to stop just where he is and pass some time in his own company.”

“Here is your great soul—the man who has given himself over to Fate; on the other hand, that man is a weakling and a degenerate who struggles and maligns the order of the universe and would rather reform the gods than reform himself.”

“For in this Case, we are not to give Credit to the Many, who say, that none ought to be educated but the Free; but rather to the Philosophers, who say, that the Well-educated alone are free.”

“Philosophy does not promise to secure anything external for man, otherwise it would be admitting something that lies beyond its proper subject-matter. For as the material of the carpenter is wood, and that of statuary bronze, so the subject-matter of the art of living is each person’s own life.”

“It is more necessary for the soul to be cured than the body; for it is better to die than to live badly.” – Epictetus

“Think of your many years of procrastination; how the gods have repeatedly granted you further periods of grace, of which you have taken no advantage. It is time now to realise the nature of the universe to which you belong, and of that controlling Power whose offspring you are; and to understand that your time has a limit set to it. Use it, then, to advance your enlightenment; or it will be gone, and never in your power again.”

“When people injure you, ask yourself what good or harm they thought would come of it. If you understand that, you’ll feel sympathy rather than outrage or anger. Your sense of good and evil may be the same as theirs, or near it, in which case you have to excuse them. Or your sense of good and evil may differ from theirs. In which case they’re misguided and deserve your compassion. Is that so hard?”

“Never let the future disturb you. You will meet it, if you have to, with the same weapons of reason which today arm you against the present.”

Stoic Quotes on Goodreads the Best Quotes From the Stoics

I hope these Goodreads quotes helped you. Please comment below and share the best Stoic quotes that have benefited you when needing Stoicism’s best quotes on Goodreads.