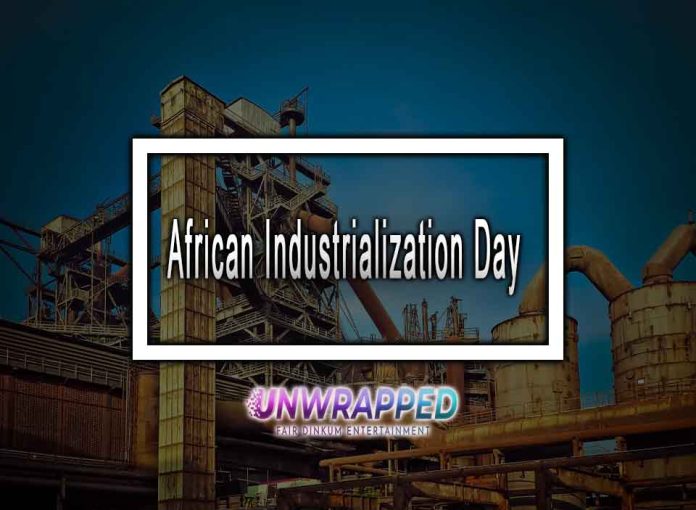 African Industrialization Day is celebrated every year on November 20. African countries must focus on industrial development to achieve long-term and inclusive economic growth. The introduction of new technology may help the industry raise production, improve the skills of its staff, and create jobs. As a result, African nations may attain high growth rates, diversify their economies, and lessen their vulnerability to external shocks through industrialization. In addition, it will potentially impact poverty alleviation by creating jobs and wealth.

In July 1989, Addis Ababa, Ethiopia, hosted the Organization of African Unity’s (OAU) 25th Ordinary Session of the Assembly of Heads of potential State and Government. November 20 was designated as Africa Industrialization Day during this meeting. The United Nations General Assembly recognized December 22, 1989, as Africa’s Industrialization Day on the same day. On November 20, 1990, it was first spotted.

Since its inception in 1990, Africa Industrialization Day has served as a platform for a slew of African governments and organizations to discuss methods to speed up its industrialization. Throughout Africa, unique seminars, gatherings, and other activities are hosted in honour of this one-of-a-kind occasion.

Trade between African countries, manufacturing exports, jobs for young people, and poverty reduction all have the potential to be improved by the CFTA’s implementation. Structural change and poverty reduction in Africa are two of the many benefits that the CFTA might provide. Specific analyses suggest that CFTA might boost intra-African trade by 52%, increasing African manufacturing exports.

Manufacturing currently accounts for barely 10 per cent of Africa’s GDP, a far lower figure than the rest of the developing world. A successful CFTA may close this value gap by encouraging industrial growth and value-added. The creation of a continental market, the release of manufacturing capacity, and the strengthening of a global negotiating bloc are all made possible by adopting CFTA.

As noted above, the successful implementation of the CFTA might have a considerable influence on Africa’s industrialization, provided suitable industrial policies are implemented. There are many potential benefits to be gained by “exploiting prospects for scale production, continental market access, and improved reallocation of resources,” one of the CFTA’s aims.

The CFTA is expected to lead to increased economic diversity in Africa, which will, in turn, lead to higher industrialization. The successful implementation of a CFTA would also contribute to increased productivity because businesses would better manage resources and maximize opportunities for scale production and continental market access, potentially leading to significant industrialization effects.

Another way to boost industrialization is through technology transfer since “exports produce efficiency and learning benefits” for nations and businesses. Finally, the CFTA will give African governments more bargaining ability to remove barriers to trade and investment. As a result, you will better protect the continent from asymmetric accords that might harm exports and industrial growth. To ensure that no potential nation is left behind in sustainable industrialization, emphasis should be given to the specificities of small countries, islands, landlocked countries, and less industrialized economies.

What was the African Industrialization Day 2021 theme?