A Very Hiatus Halloween On 30-10-2022 At Forum Melbourne, Melbourne VIC 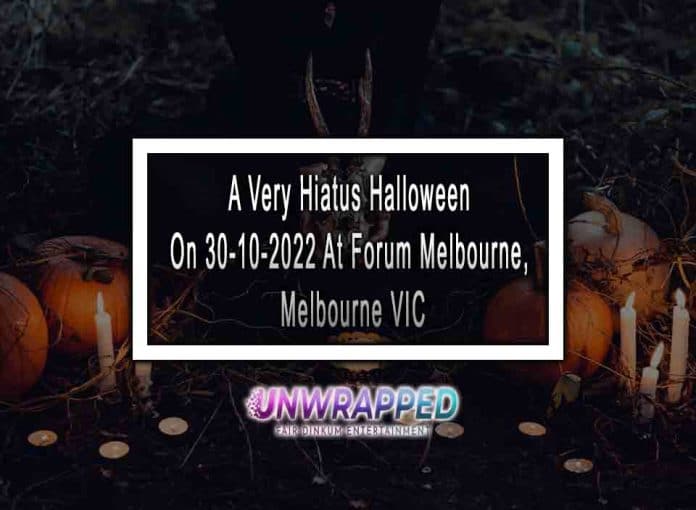 Hiatus Kaiyote, a Grammy-nominated band from Melbourne, has announced Hiatus Kaiyote Presents A Very Hiatus Halloween, a mini-festival that will take place at Forum Melbourne on Sunday, October 30th, 2022. A Very Hiatus Halloween is headlined by Hiatus Kaiyote and hosted by the Duke of Dread, aka PBSFM’s DJ Richie 1250, from the ghostly grounds of The Forum. The Night Terrors’ mind-blowing combination of dark synth magic and Melbourne’s favorite improvisational group, Uncomfortable Science: In Hell, will join the band on stage. Alon Ilsar’s nightmare, which slices reality into ribbons, will also welcome visitors into his dark worlds of immersive technology and rhythm.

A unique Spooky Drag Show, created with some of Melbourne’s top Hallow-queens, and a dismembered ensemble of Sideshow Maniacs who will have heads spinning throughout the night, are among the additional acts. The audience is invited to participate in the eerie action by submitting their finest work to the Creepy Short Films that will be shown in the fright theatre. If filming isn’t your thing, show your Halloween enthusiasm by dressing up in costume, with awards handed to the best dressed.

Dragula arrived on the scene to change things up and put a spotlight on alternative drag after the development of RuPaul’s Drag Race and the popular metamorphosis of drag art. The horror-drag competition program, created by queer nightlife legends and drag icons the Boulet Brothers in 2016, has taken RuPaul’s formula and amplified it to horrifying levels.

Hiatus Kaiyote is an Australian jazz/funk band comprised of singer/guitarist Nai Palm, bassist Paul Bender, pianist Simon Mavin, and drummer Perrin Moss that formed in Melbourne in 2011. Paul Bender was there when Nai Palm (born Naomi Saalfield) did a solo show in Melbourne in 2010. Bender contacted Palm after the concert and proposed cooperation. After a brief period as a pair, they enlisted Perrin Moss and Simon Mavin to form Hiatus Kaiyote in 2011.

Mavin was a member of The Bamboos at the time but departed to concentrate on Hiatus Kaiyote. Hiatus Kaiyote debuted at the 2011 Bohemian Masquerade Ball, where they performed alongside sword swallowers, fire twirlers, and gypsy deathcore bands. The band opened for Taylor McFerrin in Melbourne in February 2012. They so took McFerrin that he brought them to DJ Gilles Peterson, a well-known broadcaster and record label owner.

Boys Like Girls Concert On 07-10-2022 At Roundhouse, Kensington NSW