A Brief History of Bitcoin Hardforks 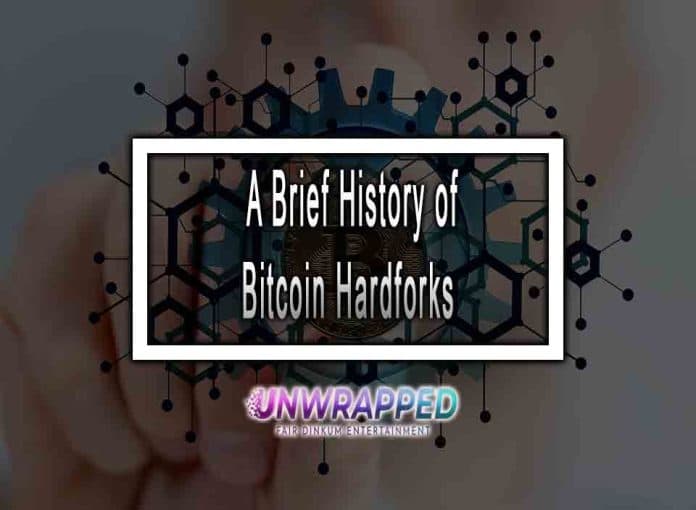 As Bitcoin sweeps the financial industry, more and more people are becoming interested in the online phenomenon. As Bitcoin gains traction, the number of investors keeps increasing, with recent surveys showing that the percentage of the American adult population that invests in bitcoin is currently sitting at 17%, with that number being much higher throughout the whole World.

But, many people who are uninitiated into the world of cryptocurrency may not understand what stuff like mining, halving or hard forks mean, and are therefore confuse when they see all the different bitcoin offshoots permeating the market. In this article we will explain what hardforks are, and look at a few of the most important hardforks in the history of Bitcoin.

What is a Hardfork?

A hardfork occurs when the blockchain of one given cryptocurrency is divided into two separate, and distinct entities. This division happens due to a radical change in the blockchain’s protocol. Hardforks usually occur when crypto developers or other members of the community become dissatisfied with the function of the blockchain.

Bitcoin, being the most popular and successful cryptocurrency, has also spawned some of the most successful and popular hard forks, including Bitcoin Cash, Bitcoin Gold, and the original Bitcoin XT, etc. While some of the hardforks are defunct, and some are not the best investment choices, there are many successful, and viable options among Bitcoin’s many hardforks.

To identify the best hardforks, one simply needs to look at some of the best bitcoin exchange australia. These sites offer new investors a tutorial on crypto trading, an easy-to-use interface, an emphasis on safety and security, and many show the user the different cryptocurrencies that the website supports. Finding out the best hardforks to invest in is as simple as looking over the options offered on the website. If you recognize one of the options as a hardfork you’ve been interested in, then it is most likely a viable choice. Most websites support the trading of hardforks like Bitcoin Cash and Bitcoin Gold, which are the most popular and successful Bitcoin hardforks.

Now, let’s take a look at the history of Bitcoin hardforks, and perhaps discuss the most important, and the most viable options.

The first ever Bitcoin hardfork, Bitcoin XT was launched in the later part of 2014. This hardfork incorporated a number of new features which had previously been proposed to Bitcoin proper. At the time, Bitcoin only allowed for seven transactions per second. The aim of Bitcoin XT was to allow a whopping 24 transactions, more than triple what Bitcoin allowed for. To this end, the proposition was made to increase the block size of a bitcoin unit from one to eight megabytes.

While met with initial success, Bitcoin XT would not last long, as a mere year into its existence, the user base lost interest and the crypto miners abandoned the project. And while Bitcoin XT is now defunct, it still represents an important step in the Bitcoin’s history, as it was the first hardfork to attempt to compete with the original cryptocurrency.

In late 2015, a man named Pieter Wuille first presented the idea of Segregated Witness, one of the first soft forks. The idea was a simple one. Decrease the size of a bitcoin transaction in order to allow for more transactions to happen at once. It was also created with the goal of mitigating the blockchain size limitation that slows down the speed of Bitcoin-based transactions. In other words, the goal behind Segregated Witness was to make Bitcoin easier to acquire and Bitcoin transactions a lot easier and more seamless. As stated before, SegWit was a soft fork, but it was an important step and has inspired a number of future hardforks.

SegWit’s changes directly led to the spawning of Bitcoin Cash, to-date the best and most respected Bitcoin hardfork. Bitcoin Cash was created to avoid the updates spawned by SegWit, and split off from the blockchain. In mid-2017 the hardfork launched and attracted a plethora of investors and traders who were unhappy with the changes made by SegWit.

The main purpose behind Bitcoin Cash, was to retain the larger size Bitcoin blocks. And it succeeded spectacularly. Though it sacrificed speed for size, many Bitcoin Cash users feel satisfied with their choice. The crypto has a lot of defenders to this day.

Lastly, let us take a look at Bitcoin Gold. Like Bitcoin Cash, Gold is one of the more respectable and prominent hard forks on the market right now. And like Bitcoin Cash, it was released in 2017. The stated purpose of the cryptocurrency is to change the way the proof of work algorithm works, so that it can become fully separated from its predecessor.

Bitcoin Gold remains rather popular today. Although nowhere near close in popularity to Bitcoin or even Bitcoin Cash, quite a few of Bitcoin Gold’s user base are perfectly satisfied with their choice, and are sticking to their decision.

The rise of the Digital Yuan with 260 Million Individual Users