5 Unique Things To Do In Sydney With Family In 2022 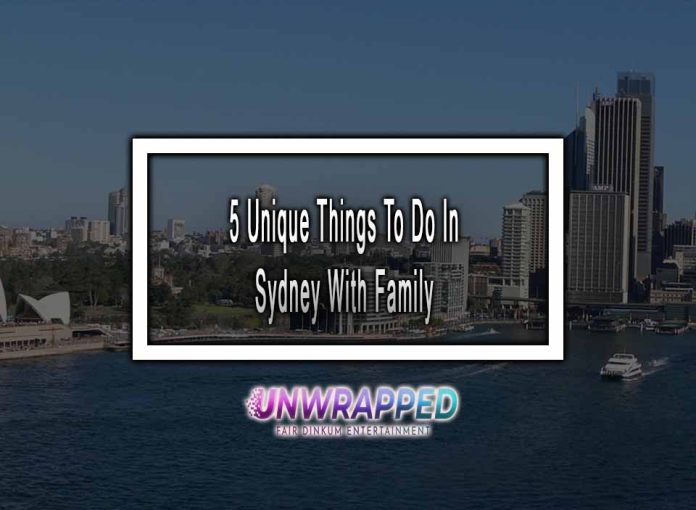 5 Unique Things To Do In Sydney With Family In 2022

Sydney is a fantastic and beautiful city in Australia. You can also count it as the most beautiful city in the world. Every year millions of people visit Sydney to explore it. The best thing you can do in Sydney explore the city on foot. You will love to see little things there. If you are visiting Sydney with your family, then here are some fun things that you can do there.

It also depends on the time of year you climb the bridge. But you can do it at night to get the 360-degree panorama of the city light. It is the most fun thing that you can experience in Sydney. Climbing the bridge at night, especially during the vivid Sydney festival, will be a love scene to watch.

The Sydney Opera House is another of Australia’s most famous monuments.

Weekly basis, it offers approximately 40 various performing arts activities, such as musicals, operas, dance performances, recitals, and theatrical productions. You may purchase tickets to midnight entertainment and have supper at Photoactivity, the winner site cuisine. The restaurant building is inside the opera house hall. The name of this restaurant is after Bennelong, who was a famous Indigenous Australian man of the Wangal Tribe.

The Sydney Observatory is approximately 150 decades old and rests on Miller’s Peak. It provides impressive views of the Sydney skyline from several areas of the surroundings. The Observatory offers a one and half hours of the nighttime tour that involves seeing the stars, Moon, galaxy, and, depending on the weather. You can also see other planets with the help of a high-powered telescope.

Australia is a multiracial society with numerous immigrants. Many notable festivals, hotels, and marketplaces have resulted from this varied blend of cultures. For one, the Sydney Chinatown Night Market is an international market that attracts both residents and visitors.

The market includes around 50 vendors on Friday evenings which are either managed by persons of Asian origin or promote Asian heritage. You can eat various foods such as sushi, yum cha, takoyaki, and teppanyaki.

Luna Park Sydney is a vintage tourist attraction near the Sydney Harbour Bridge. In 1935 the development of this park was done in the heyday of Coney Island-style entertainment attractions. Luna Park, which is well-known for its spectacular entrance, is home to exhilarating rides, circus games, and food places.

It also contains a channel similar to ancient amusement park facilities famous as coney Island. According to the evenings, it can stay open until nine p.m., making it a great spot to go if you’re searching for exciting stuff to do without making reservations.

Also, Read: Top 10 Reasons to Visit the Birthplace of Australia

One of the world’s most beautiful cities, Sydney is crammed with kid-friendly cultural attractions and outdoor adventures. Near the city center, the waterfront pedestrian precinct of Darling Harbour features a dizzying array of family attractions, including an aquarium, IMAX theaters, and harbor jet boat rides.

How Many Online Moving Quotes Should You Get?

Highlights Of A Sydney To Melbourne Road Trip