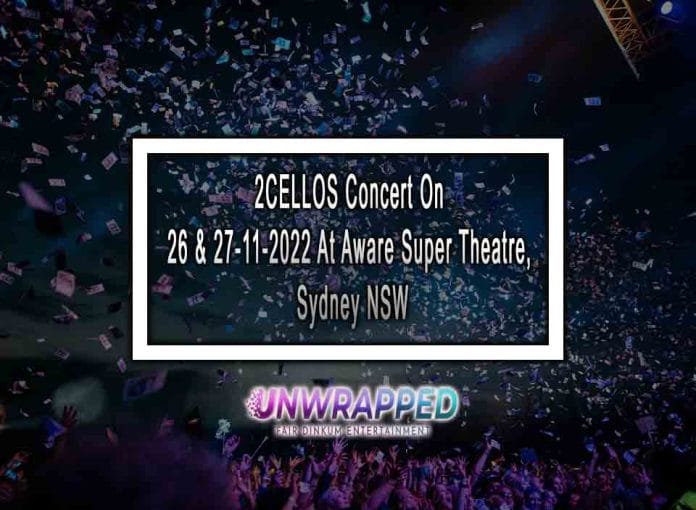 On November 26 and 27, 2022, the acclaimed and massively popular cello duo 2CELLOS will bring The Dedicated Tour to Aware Super Theatre. It will be their largest and final tour together, which is sad news for their fans. Before concluding their tour in Australia and New Zealand at the end of the year, they will perform in venues across Europe, including those in Austria, Poland, Italy, Germany, Belgium, the UK, and Spain.

2CELLOS said: “The Dedicated Tour is the pinnacle of all the 2CELLOS has accomplished. These will be our largest performances, drawing some of the largest crowds. Together, we scaled the mountain to the top of our collective ability. We’ll use all we’ve learned through playing together on these dates. They’ll rock hard, be emotionally stirring, and be intensely passionate. Then we may rest the 2CELLOS after throwing everything we have at them. Are you prepared to join us in celebrating?”

With their distinctive playing style and thrilling live performances, the dynamic duo Luka “Uli” and HAUSER have made a potential name for themselves as a significant force in contemporary music. Their inventive covers dissolve the barriers between musical genres by reimagining the cello’s potential in pop and rock music and pushing the instrument to new heights. 2CELLOS were hand-picked by Sir Elton John to play both as an opener and as a member of the legendary singer’s live band and have shared the stage with musical greats such as Steven Tyler and George Michael.

Cellists Luka Uli and Stjepan Hauser make up the Croatian pair 2CELLOS. They perform instrumental renditions of famous pop and rock tunes along with classical and movie music. They have five albums to their credit since being signed to Sony Masterworks in 2011. The pair has been on several American television programs, including Glee and The Bachelor (Sean and Catherine’s Wedding), and they perform worldwide. After agreeing to record with Sony Masterworks, 2CELLOS completed recording their debut album in May 2011, released on the Croatian Menart Records label.

Their self-titled first album, released on 19 Jul 2011, features cover versions of songs by U2, Guns N’ Roses, Nine Inch Nails, Sting, Coldplay, Nirvana, Muse, and Kings of Leon. A cello rendition of Michael Jackson’s “Human Nature” is also included on the CD. The pair selected songs that could be adapted into covers that could be played on just two cellos. 2CELLOS released their second single, “Welcome to the Jungle,” a version of the Guns N’ Roses song of the same name, before the album’s release.