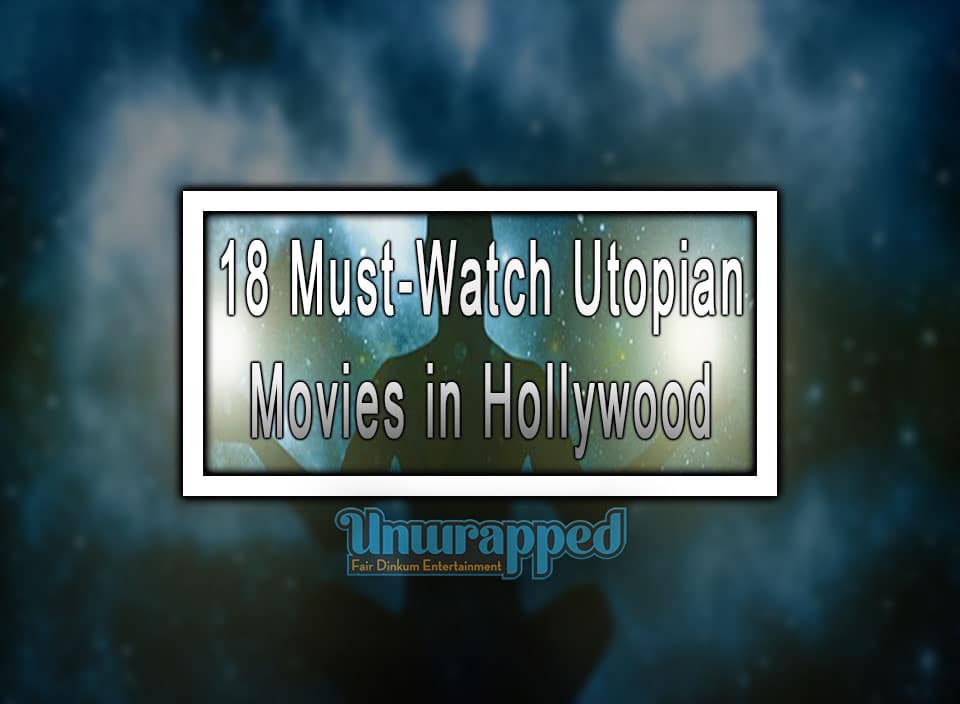 Living in an agley and chaotic world, one may come to imagine a highly desirable society where opulence and quietude rule and people are happy, blissful, healthy, and harmoniously living with each other.

Perhaps, Sir Thomas More was thinking of the same thing when he created the novel “Utopia” in 1516. He wrote this book to show contempt about the political corruption that was relevant during his time.

Hence, utopian novels came to prominence that eventually leads to film adaptations. And so, I delve into a few of these movies that are worthy of your time. These are just some of the most entertaining stories of utopia, which come with varied sub-themes or topics.

Among the most successful and well-celebrated films of all time is that of James Cameron’s “Avatar” in 2009.

Right after his mega-hit blockbuster film “Titanic” that is also leaving a mark in the history of movies and literature, Cameron released this dramatically beautiful and eye-catching movie.

The multi-awarded producer-writer-director left us captivated by the enthralling and thought-provoking mysterious and magical paradise-like setting of the utopian world of “Pandora.”

It outlines a sparkling community where life is thriving. Thanks to the marvellous light and sound system and the latest technology that Cameron chose to create the magical world of the Na’vis.

Thus, this James Cameron original film and storyline earned him more than two billion dollars in the box office and recognized as one of the highly acclaimed movies of all time.

Hours or Minutes – 2 hours and 42 minutes

Despite the apparent notable battle that happened in the film, the Academy-award-winning “Black Panther” is by nature depicting a utopian society of “Wakanda.”

I should say that this movie is one of the best films that I’ve seen so far from its beguiling plot, breathtaking cinematography, impressive musical scoring and sound effects, and cutting-edge graphic designs to a magnificent world of utopia.

From the film title itself, “Zootopia,” it narrates a story about a utopian world where the civilizations are animals.

This more than a billion box office hit movie showcases a society of mammal, thriving, and prosperously living in the grandiosely well-off metropolis. Everyone lives peacefully and harmoniously with each other.

“Zootopia” became known as a place where you can be anything or anyone you like. So, if you happen to be a fan or an enthusiast of a cartoon animated film, then this movie is for you.

Hours or Minutes – 1 hour and 48 minutes

Another notable utopian movie that almost all of us have loved is Jim Carrey’s “The Truman Show,” which is also a blockbuster hit in 1998.

The witty yet intriguing narrative of the film, which Andrew Niccol, who is also one of the producers of the movie, creatively crafted caught the attention of the masses, hitting more than two hundred million dollars in the box office.

It chronicles the life of the lead character of the movie’s namesake Truman Burbank played by Jim Carrey. It’s a 24-hour live stream or reality TV show that features the daily living and activities of Truman, where he lives in a made-up ideal utopian society.

The world knows him and everything about him except him. He is clueless that his whole life was perfectly put up in a live streaming television show. However, as the story progresses, he discovers a series of odd events that made him start questioning.

Hours or Minutes – 1 hour and 43 minutes

Not to be confused with the dystopian novel “On the Beach” by Nevil Shute, this Alex Garland’s book-inspired film “The Beach” outlines a world of dystopia.

A Leonardo Dicaprio’s leading starring role film presents a legendary, beautiful, idyllic, and secluded beach paradise, unspoiled by civilizations and tourism in Thailand. It follows the life and adventure of the young backpacker traveller as he searches for this mystical and heavenly utopia.

Seeing “The Beach” in the film makes you wanting to stay there forever, as it boasts with immaculate, pristine, white sand, and crystal-clear turquoise water that’s quiet and unruffled, secretly hidden in an island.

Hours or Minutes – 1 hour and 43 minutes

This 2015 George Clooney lead starring film “Tomorrowland” renders “A World Beyond.” That is why in some regions used the latter as its title.

Portraying the role of a disenchanted genius inventor, Clooney, together with the science enthusiast teen girl, embarks in a mind-blowing journey to an intriguing and thought-provoking futuristic-like alternate dimension known as the “Tomorrowland,” which showcases a perfectly designed and set-up world, with a high-technology system running the entire place.

Bringing us to a world where all the residents in society are seemingly perfect, “Pleasantville” follows the lives of the idyllic family in a utopian society in a popular show on TV.

As its name suggests, “Pleasantville” is a 1950 black-and-white sitcom backdropping a dainty and peaceful neighbourhood, seemingly perfect and pleasant.

The plot follows the life and journey of two siblings played by Reese Witherspoon and Toby Maguire, who will get stuck in “Pleasantville,” after a strange repairman came into their house and gave them a bizarre and bewildering remote control.

Hours or Minutes – 2 hours and 4 minutes

Another Andrew Niccol masterpiece is the 1997 film “Gattaca,” which is among the most popular utopian movies, as it is always in the list of choices in the said category.

Niccol outlines the story in a society of perfect genetically selected people to ensure that they are superior in every way. Through the “eugenics” program, the world becomes idyllic in every sense of the word, as the best traits of the parents get selected and formed into scientifically mastered and faultless offsprings.

Hours or Minutes – 1 hour and 46 minutes

Although it comes with thrilling action scenes, “In Time” touches elements of utopia with the rich, glamorous, and blissful society.

This 2011 film top-billed by Justin Timberlake and Amanda Seyfried tells a story of a new world where time becomes a currency. Everything started marvellous and peaceful as the new law of the land restricts violence and overpopulation due to the hierarchy of status system implemented by the government.

Hours or Minutes – 1 hour and 49 minutes

Even so, Tom Cruise’s top-billed film “Minority Reports” speaks highly of dystopia, it did have elements of utopia.

This Philip K. Dick novel-inspired movie details a world of “precogs” in the “PreCrime” department where the lead character works. The element of utopia involves in the film is having a city that has no crime rate, as criminals get detected and known before they even commit the crime.

Hours or Minutes – 2 hours and 25 minutes

The 1927 classic film “Metropolis” is another notable name listed in utopian movies. This Thea von Harbou storyline plots a futuristic world of utopia for people who are extremely rich.

Due to the palatial description of the writer on how a utopian society looks like, it became one of the most remarkable films that depict the true meaning of the word. Von Harbou, together with Frtiz Lang, creatively created an elaborate backdrop of the movie.

Hours or Minutes – 2 hours and 33 minutes

Valerian and the City of a Thousand Planets

Despite the intergalactic animosity that the film presents, “Valerian and the City of a Thousand Planets” depicts a thriving, modern, and peaceful metropolis called Alpha that is ever-expanding.

It is the lovely home of diverse species, both humans and aliens. With the peacekeeping police protecting the land, it showcases absolute peace and order, which is just the case of how a utopia looks like.

Hours or Minutes – 2 hours and 16 minutes

Though the posters, ads, and trailers reflect combat, seemingly look like a dystopian setting, in reality, it also touches a utopian side. “Elysium” is the enormously gigantic space habitat found on the orbit of the Earth, where the powerful and rich dwell.

It’s an opulent, well-developed, and highly equipped with scientific and technological advancements with devices that can reverse the aging process, regenerate its citizen’s body parts, and cure all types of illnesses.

Hours or Minutes – 1 hour and 49 minutes

“Simon & Schuster” publishing company reportedly claimed that the 2004 box-office hit film “The Village” took some ideas from the novel they published entitled “Running Out of Time” by Margaret Peterson Haddix.

The story is a period horror film that has a touch or an element of utopia. It features a small society with inhabitants dwelling peacefully and harmoniously in a secluded, remote area in the city of lush, greens, and breathtaking nature.

Hours or Minutes – 1 hour and 4 minutes

When you haven’t seen the film, and you just heard the title, you might be doubting that it is a utopian movie. However, it is. The fact remains that there’s a bit of dystopia in the film, but the story of utopia is imminent.

This 1993 blockbuster film that top-billed popular action stars, namely Wesley Snipes and Sylvester Stallone, outlines a utopian society. The backdrop of the plot is in a community where peace and calmness reign. Hence, no one knows how to respond to a criminal.

Hours or Minutes – 1 hour and 55 minutes

“Star Trek,” “Logan’s Run,” and “Lost Horizon” are the other utopian films that you can add in your collection of movies to watch while you are at home or not doing anything.

“The Time Machine” and “Things to Come”

H.G Wells 1895 and 1936 classic books, namely “The Time Machine” and “Things to Come,” respectively, are also two other movies that you can consider as they both touch a handful of elements of utopia.

While “The Time Machine” touches dystopia, it details about a utopian society of Eloi. As to how Wells describes them, they’re enchantingly beautiful human race who are living in an extremely idyllic or pleasant place.

On the other hand, the “Things to Come” movie may come with a dystopian illustration, but it also details a utopian society as the citizens in the futuristic, distinct architectural city structure of “Everytown” dreams to build a society of utopian bliss.

Hours or Minutes – 1 hour and 36 minutes

Hours or Minutes – 1 hour and 40 minutes

Conclusively, all the movies I’ve listed above have varied ingredients in different genres with multiple sub-themes or topics within its speculative or imaginative fictional plots. However, it is incontestable that each one of the books I’ve mentioned also discussed or showcased elements of what makes an idyll or perfect utopian society. After all, there’s no such thing as utopia, and not everything that looks nice is beautiful.

Stay Connected
45,214FansLike
5,659FollowersFollow
831FollowersFollow
Previous article9 Top Selling American Novels in Dystopian Genre
Next articleFan Of “The Handmaid’s Tail”? Then These Dystopian Books are for you

Warm Up and Stretching: Why Is It Important Before Participating In Sports?

The Benefits Weight Training and How to Do It Properly

What Is Foot Reflexology And Why Is It Used, Benefits?