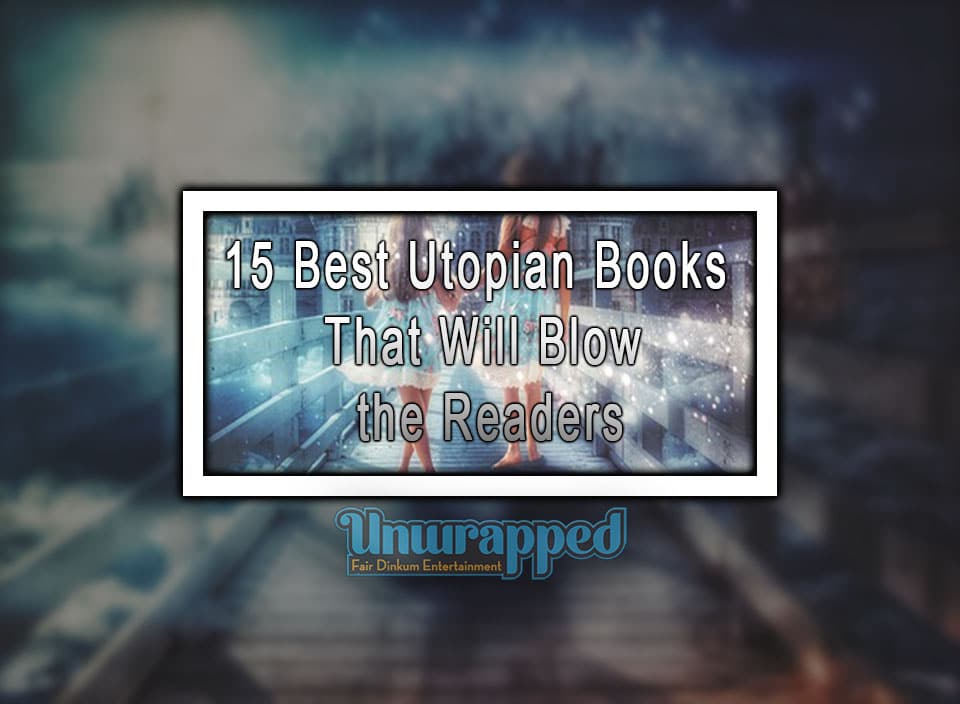 Greatest Books in The Utopian Genre

Nowadays, we’ve heard the word dystopia mentioned quite often, especially during these daunting times, and yet, it is also during these periods in life that we dream of that blissful moment of a better place, a utopia like they say.

You’ve probably heard the word more often today as people want to break free from the dystopian reality that we are experiencing right now, from the perpetuating war to surging global health crisis.

Hence, who doesn’t dream of utopia? But what does that word even mean?

Etymology-wise, utopia came from the Greek words “outopos” and “eutopos,” which means “no place” and “good place,” respectively.

In layman’s terms, a utopia is an ideal place, a paradise, or a heaven on earth, which is “outopos” or “no place” because we all know that, in reality, there’s no such thing as perfect. It was in the 16th century that the word first came out and used in direct context.

Sir Thomas More was the first person who officially recorded in history to use or coined the term utopia. In 1516, he published the classic literary masterpiece “Utopia” that has opened many doors in literature for utopian-themed creative writings.

Speaking of which, I came with a brand new list of literary pieces that have settings or elements of utopia.

What are the Best Utopian Books?

Let’s admit the fact that there are days in life that we just have had enough of everything from chaos to illnesses. It also comes with things that we entertain our minds and hearts, such as listening to music, watching movies or shows, and reading.

What we feed in our minds has a significant impact on our happiness and sanity. It plays a critical role in our outlook and how we live our lives. And so, let me give you my list of the best books of utopia that, for me, are worth reading. These are among the finest selections to temporarily break away or take time off from what’s happening outside.

Classic masterpieces are always one of my most favourite books to read. So, it’s just right to start my list with the book that started it all in 1516. Sir Thomas More brilliantly crafted “Utopia.” The original title was in Latin and immensely long.

Sir More created a frame story or an intercalated narrative, which is a story within a story. It primarily depicts an imaginative, fictional island where people willingly, happily, and harmoniously share a common culture and the way they live their lives.

In a short or direct sense, Sir More describes the society as a “Utopia” that illustrates everything is perfect, beautiful, peaceful, organised, and no one worries about money. It poses a setting where all the things around the island are natural and that problems or any danger are not present in the community.

By saying so, people are living joyfully with the belief that everything happens for the collective good of everyone.

Published in 1953 and written by Arthur C. Clarke, “Childhood’s End” is another beautifully well-crafted utopian novel.

Detailing an alien invasion is an element of dystopia, which how the story depicts. However, the mysterious “Overlords,” as depicted by Clarke in his book, bring utopia to the world to, apparently, prevent the extinction of the human race.

They bring peace and prosperity to Earth and eliminate poverty, ignorance, and disease. They allow people to do what they want, and they do not interfere. Yet, fifty years later, they reveal who they are and the real purpose of their arrival, which leads you to varied questions.

Aside from the notable 1962 dystopian book “Brave New World,” Aldous Huxley created “Island,” and published it in the same year.

It is the last novel that he released, which is primarily a counterpart of his classic dystopian novel, as mentioned above. The story begins with the lead character’s get shipwrecked in imagined, fictional utopian island.

Huxley describes the remote island in the Pacific, which he named “Pala,” as a paradise, where thrives an ideal society that’s continuously flourishing with everything perfect and beautiful.

Speaking of classic masterpieces, it is undeniable that “The Republic” by the prominent ancient philosopher Plato is also one of the best good read utopian novels.

Translated by prominent names in literature, the book entails the dialogue of Socrates about defining justice and a just man. His speech includes him differentiating justice, and a man who is just, saying that the latter is much happier than the unjust.

It also details an inquiry of what is a perfect community and the ideal people within it, considering the nature of the present administrations, which leads to proposals and comparisons of series of various hypothetical or imagined cities.

Winding up to a utopian city-state called Kallipolis, ruled by a philosopher-king, they also include other topics or subjects, such as the immortality of the soul, the philosopher’s responsibility, poetry’s role or function in society, and the theory of forms.

True to her stance, Charlotte Perkins Gilman bravely created this utopian novel in the world of feminism.

Published in 1915, Gilman illustrates a secluded society of women. They reproduce through asexual reproduction, commonly referred to as parthenogenesis. With that, it resulted in an exemplary social order. Thus, it created a community that’s free from conflict, domination, and war.

Gilman wrote the story by one of the three primary characters in an expedition to the uncharted place packed with arguments and curiosities on the society’s asexual reproduction. They do not believe in how these women can reproduce in such a method. While on their way to the area and as much as they try to secretly enter the place, three beautiful women from the society have spotted them already through the treetops.

Despite the three men’s efforts and treacherous moves to catch the women, they lost and yet continued to search the new land of which the narrator, the lead character refers to as “Herland.”

Ernest Callenbach creatively crafted this 1975 utopian book “Ecotopia,” and as presented by its title, the plot tells about the beautiful ecological system of the world.

Although Callenbach claimed that the society he imagined or described in the book is non-existent with the idea of the perfect community, it became an influential and powerful force in the green movement during the 1970s,

Set in 1999, which is twenty-five years into the future from 1974, and comprises of various reports and diary entries of the lead character, who is the first-ever mainstream media reporter in the US to investigate or look into a small country that separated from the country in 1980 called “Ecotopia.”

Another classic utopian book that came from the beautiful mind of Edward Bellamy, which is the third best-selling books during its publishing date in 1888.

“Looking Backward” chronicles the story of a young man, depicted by Bellamy as a hero figure. Going forth to the end of the nineteenth century, he falls into a deep, long, hypnosis-induced sleep and finds himself awake in the same place one hundred thirteen years later.

He wakes up in the same place as he fell asleep in, but in a different world, a completely changed environment. The year is 2000, and while he was in that long, deep sleep, the country became into a utopia of socialism.

Noted as controversial due to the dialogues of the characters that talks about the rejection of choosing between right and wrong, or free will. Skinner also included the dismissal of the idea of souls or spirits of human behavior getting controlled by a bodiless entity.

He also embraces the concept that the environment variables determine the behavior of organisms, including human beings. Adding to it is the theory that systematic alteration of these environmental variables can lead to a sociocultural system that is closely comparable or equivalent to utopia.

Ursula K. Le Guin is another notable name in the literary world. She wrote the book “The Dispossessed,” which illustrates both a dystopian and utopian world.

Hence, the title comes with “An Ambiguous Utopia,” which either means a debatable or arguable sense of utopia, as it comes with a bit of element of dystopia. That is why I included it also in my dystopian list of books.

Similar to “The Dispossessed,” Le Guin’s “Always Coming Home” is also both a utopian and dystopian genre novel. It tells a story of a society where they keep their low population number without force and oppression. Thus, seemingly depicting that the resources are sufficiently enough for them.

Although incomplete, Sir Francis Bacon’s 1626 book “The New Atlantis” leaves a lasting inspiration and perseverance for mankind about the good qualities that create a utopian society.

Sir Bacon portrays his ideas and aspirations of what the future holds and human knowledge and discovery with valuable characteristics to succeed. He discusses the essential principles of a good society, which includes compassion, dignity, enlightenment, generosity, godliness, honesty, kindness, respect, and public spirit.

John Kenneth Galbraith created and published “The Affluent Society” in 1958 with the latest revision, trying to depict a community of affluence.

Galbraith lays visionary creative writing about economic abundance, and thus, imagining a utopian society in return. Due to the provocative topics or subjects touched in the book with regard to the economy, it became a public discussion.

Nonetheless, “The Affluent Society” also gets credited and acknowledged as responsible for the popularity of the term “conventional wisdom.” It is among the crowd favourites due to its powerful and challenging argument with conventional thought.

He is also the brilliant mind of the dystopian novel “The War of the Worlds” in 1898, and the 1895 utopian-dystopian book “The Time Machine.” Wells proved himself immensely in literature.

A few years later from the publishing dates of his two popular novels, he released “A Modern Utopia,” which chronicles the journey of two travellers that have fallen into a space-warp and found themselves in a Utopian Earth.

The “World State” is the sole and lone owner of the entire land on earth. Everyone shares the same things, such as customs, laws, and money. They also have the same language, seemingly illustrating a bountiful and peaceful planet.

Another promising classic utopian novel from Wells that’s also worth reading. “Men Like God” depicts a society where both women and men are happy and bright. Everyone is healthy and lived a long life. He also likened the appearance of mankind in this book as that of Greek deities.

Morris shows a society that is run under common ownership, which means that there’s no authority, no big cities, no class systems, no courts, no divorce, no monetary system, no prisons, and no private properties.