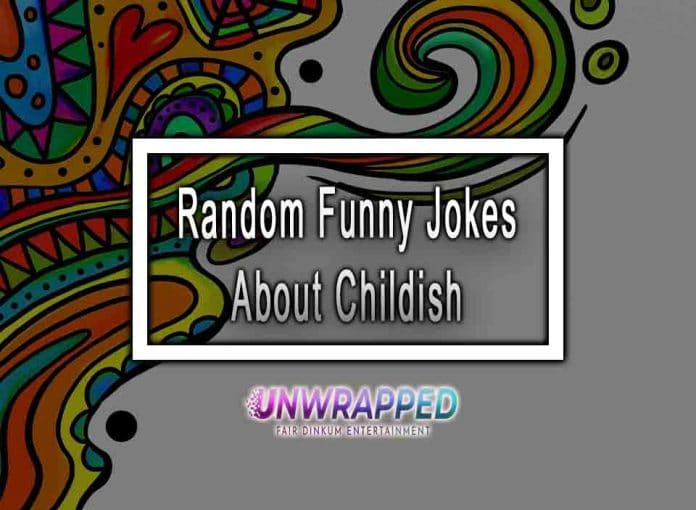 Ready for a laugh? I have collected from around the internet some of the funniest random jokes on Childish. See below 10 side spitting (or not) jokes on childish.

“How many immature teenagers does it take to screw in a lightbulb?
Your mum.”

“I have fancied this girl at work for some time but never really spoke to her too much, finally I plucked up the courage to ask her out for a drink and she said to me “”I like a gentleman with a sophisticated sense of humour, I have a boyfriend already and he is much wittier than you could ever be””
I was angry and thought carefully for a moment before my response……
“”Well your boyfriend is a big smelly poo poo head”””

“The iPhone is useless to an immature person like myself.
I type “”5318008″” into the calculator and turn it upside down, but the screen rights itself.”

“My wife told me I was immature and needed to grow up…
So guess who is not allowed in my tree-house now!”

“To stop her four-year old daughter from biting her nails, her mother tells her it’ll make her fat.
“”I won’t do it any more, Mummy,”” says the daughter.
Next day they are out walking when they meet a very fat man.
“”If I bite my fingernails, I’ll be as fat as that, won’t I Mummy?””
“”You’ll be fatter than that,”” says her mother.
They get on a bus and, sitting opposite them, is a very pregnant lady.
The little girl can’t take her eyes off the woman’s belly.
The pregnant lady feels increasingly uncomfortable under this stare, and finally leans forward and says to the little girl. “”Excuse me, but do you know me?””
And the little girl says, “”No, but I know what you’ve been doing!”””

“I like to stand near ATMs.
When somebody types in their pin number I shout, “”Got it!”” and then I run away.”

“Today, my girlfriend and I were having a serious conversation about our relationship, during which I took the time to make a napkin monster and attack her with it.
I think it went really well.”

“Mum: What are you gonna gift grandma for her birthday?
Boy: Football
Mum: But your grandma doesn’t play football!
Boy: On my birthday she gave me books.”