Twin Pregnancy Here are 10 Eye-opening Early Signs You Must See! 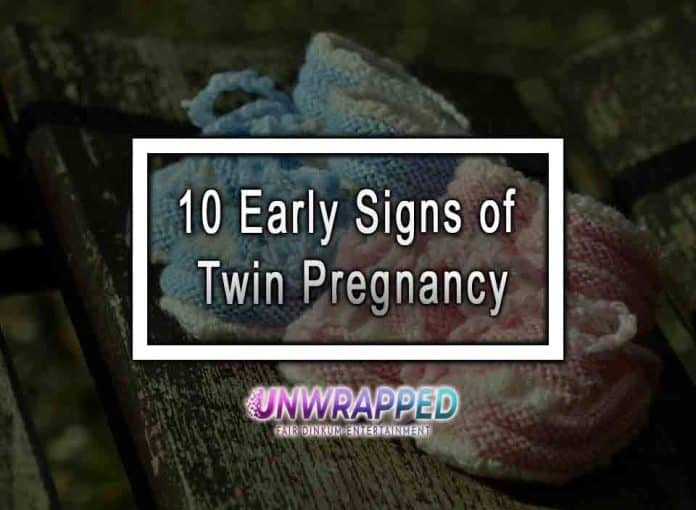 If you are pregnant and experiencing severe pregnancy symptoms, you might have wondered if you are carrying twins? The only obvious way to differentiate between single or multiple pregnancy is ultrasound.

It is not easy to tell by symptoms that you are having twins. However, some common signs can indicate a twin pregnancy.

This article will tell you about those symptoms that can give you a hint that you have more than one baby. However, you must consult your gynecologist to be sure of your condition.

Some earliest signs of a twin pregnancy are:

These symptoms are often associated with a twin pregnancy. Let’s explain each sign in detail.

Not to Miss: 10 Early Signs of Pregnancy

You probably have wondered how does home pregnancy test work? When sperm fertilizes the egg inside you, resulting in pregnancy, your body begins to release a hormone called the human chorionic gonadotropin hormone.

When you take a home pregnancy test, it detects the levels of hCG in your urine. The test will be positive if this hormone is present at higher levels.

However, a home pregnancy test cannot tell you the exact level of hCG, and you must take an hCG blood test. Your blood test indicates abnormally high hCG levels may indicate a twin pregnancy.

Yet, a high amount of hCG in the blood does not always mean that you are having twins. Sometime singleton pregnancies also indicate higher hCG levels.

Fatigue is not unusual during pregnancy; every pregnant woman experiences fatigue. Fatigue is associated with sleep deprivation, hormonal imbalance, and body changes during gestation.

But extreme fatigue, insomnia, and lethargy may occur when carrying more than one baby.

However, it is difficult to tell what degree of fatigue can be linked to multiples, especially if you are the first mother. Although, a second-time mum can differentiate between the levels of fatigue.

Extreme fatigue can also be associated with other factors like pregnancy-induced depression, chronic illness, and malnutrition.

Doppler heartbeat count is a method to record your fetus’s heartbeat. This method uses a device known as Doppler fetal monitor. However, this technique works only after the 9th week of the pregnancy.

If your doctor or midwife is experienced, they might be able to listen to two heartbeats using a Doppler device. But if detected in the early weeks of the pregnancy, it can be misleading. An echo from the same baby’s heartbeat can also be deceiving.

Therefore, after listening to a second heartbeat, your doctor might suggest an ultrasound to get a clear picture.

The most exciting moment you impatiently wait for after getting pregnant is to feel your baby move. But usually, it does not happen before the 18th week. However, the movement can be detected earlier if you have a subsequent pregnancy.

Otherwise, according to some women who gave birth to twins, an early movement means a multiple pregnancy. However, some experts do not agree with the idea.

Some second-time mothers can also experience the magical moment before the 18th week. Therefore, early movement can be a misleading sign.

Furthermore, an upset stomach or gas can also be an explanation for these early movements.

An increase in weight is usually slow during the first trimester of pregnancy. However, it increases dramatically during the second trimester.

Parameters of weight gain during pregnancy are as follows:

According to the given scale, if you are gaining more weight, it might result in a twin pregnancy. After all, you are carrying more than one fetus inside you. However, as per estimate, a woman pregnant with twins gains only extra 10 pounds.

Another factor might also be the cause of this increased weight. Therefore, consult with your healthcare provider if you notice something like this.

Morning sickness is not new to mums who have already given birth. They also know that it does not have any specific timing as opposed to its name.

Morning sickness refers to signs of vomiting and nausea while you are carrying a baby. It sometimes strikes harder while other times may give you relief. Some even complain about hyperemesis gravidarum, a type of extreme morning sickness.

Till now, no research has been conducted to confirm the excessiveness of nausea and vomiting as a sign of twin pregnancy. Additionally, severe morning sickness can also happen during a singleton pregnancy.

Keep Reading: 10 Calcium-Rich Foods You Should Eat During Pregnancy

If you want to have twins eagerly, you must measure your belly bump repeatedly to be sure. It is not unusual to look for a bigger belly as a sign of multiple pregnancies.

Indeed, as per an estimate, mothers with twin pregnancies have a 20% bigger bump than singleton pregnancies. Furthermore, some experts say that your baby bump starts appearing soon when you carry two babies.

But it is not a definitive sign, as many other factors also play a vital role, like genetics, the mother’s height, and a bigger baby.

However, more expansion of the uterus is not rare during a twin pregnancy. Therefore, do not lose your heart and cheer up. Your larger than normal belly might indicate that you are going to have a twin.

Alpha-fetoprotein is produced in your baby’s liver during pregnancy. Levels of AFP are tested through a blood test to predict a possible congenital disability in your baby. If the amount of AFP is higher than normal, it might indicate a neural tube defect.

However, high AFP levels do not always mean a birth abnormality. Sometimes it indicates that you are carrying two babies rather than one. Hence, if your AFT test result reveals an elevated AFP level, it may be due to multiple pregnancies.

However, your doctor will recommend an ultrasound to show what’s happening clearly.

Did you know that your DNA contains a gene, namely a twin gene? As reported by geneticists, activation of this gene leads toward hyperovulation and, ultimately, twin pregnancy.

The reason is during hyperovulation; your ovaries tend to release additional eggs, increasing the chances of dizygotic twins. Hyperovulation generally runs in families. Therefore, your chances of having multiple pregnancy increases if your mother or sister also gave birth to fraternal twins.

Remember that this does not include your in-laws. Because genetics, in this case, only plays from the mother’s side. However, the twin gene can be transferred from father to daughter.

Moreover, the role of family history is only valid for fraternal twins. The connection between identical twins and genetics is not yet scientifically proven.

After looking for so many signs and symptoms of twin pregnancy, you might be confused. Remember that all the above signs do not precisely indicate a twin pregnancy.

Factors other than a multiple pregnancy also play an essential role in generating these symptoms. Therefore, you might have to look for a definitive way which is ultrasound.

Only an ultrasound sonogram can give you a clear-cut answer. If the image shows two fetuses, you are sure to have a pair of twins.

Stay Sane: What Part of the Breast Hurts in Early Pregnancy?

Twin pregnancy comes with some distinctive signs. These symptoms vary for different women. However, these signs might also result from factors other than a multiple pregnancy. Therefore, an ultrasound test is vital to confirm the possibility of twin pregnancy.

Stay Connected
52,674FansLike
5,667FollowersFollow
827FollowersFollow
Previous articleTeenage Pregnancy 10 Risk Factors You Should Know
Next articleWhich Vitamins Are Most Essential For The Elderly