Pregnancy 10 Early Signs and Things to Look out For 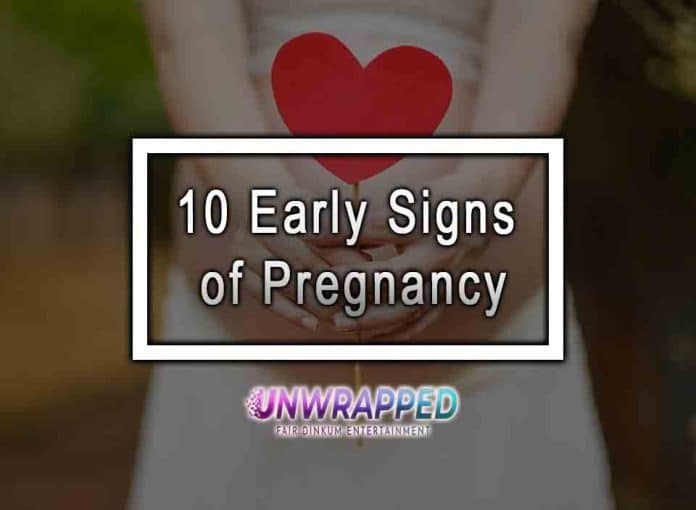 Could I be pregnant? This is the question you ask yourself frequently when you get rid of protections and decide to be a parent. However, only a pregnancy test can give a valid answer to your question. However, there are some other parameters as well.

These parameters are typically called early signs of pregnancy. However, these early symptoms of pregnancy are not alike for all women. Therefore, you might have to scrutinize your situation.

Remember that these early signs do not give a hundred percent correct answer to your question. It is not easy to differentiate between the symptoms of a disturbed period or pregnancy. However, through careful monitoring of your condition, you might be able to tell if you are pregnant or not.

Enjoy This: Pregnancy Week by Week

When Do Early Pregnancy Signs Start?

Usually, early pregnancy signs do not appear in the first week because the first week of your pregnancy is counted from the day first of your last period. Therefore, the answer to this question is not the same for all women. You might be able to detect your pregnancy in the early days or have to wait for a missed period to know if you are pregnant or not.

However, remember that only a pregnancy test gives the most clear-cut answer to your question. A pregnancy test is based on the amount of hormone chorionic gonadotrophin (hCG) in your urine. Your body starts to make this hormone from the day of conception, and it keeps on multiplying. However, it appears on tests three to four weeks after the conception. Hence, in the early days, you must look for common pregnancy signs.

What are The Common Signs of Pregnancy?

The most trustworthy sign of pregnancy, apart from the test, is a missed period. But a missed period does not always mean that you are pregnant, as the stress of any disease can also be the cause.

Here are some significant early symptoms of pregnancy (other than a missed period) that you should look for:

Let’s discuss each symptom one by one.

It might come to you as a surprise, but light bleeding or spotting is one of the early symptoms of pregnancy. It is known as implantation bleeding and occurs due to the implantation of the fertilized egg on the uterus lining.

Implantation bleeding is tricky because it happens just before or at the time of your next menstrual cycle, and you may take it as menstrual bleeding.

If you have been monitoring your BBT or basal body temperature, you might observe a rise of 1 degree. Although, this elevation in temperature does not confirm pregnancy as it might be due to any other factor. But if the temperature increase is consistent, you might say you are pregnant.

More about Pregnant: Why Is Week 10 of Pregnancy the Worst?

Another early pregnancy symptom is morning sickness, which is caused by the lowering in blood sugar or human chorionic gonadotropin hormone. It is described by nausea and vomiting, especially in the morning. However, the symptoms can also appear at any time of the day.

When pregnant, your blood volume increases due to which kidneys have to filter more fluid. Resultantly, your bladder fills more quickly, and you must visit the bathroom more often than usual. Hence, it might also be an early symptom of your pregnancy.

To reduce your bathroom trips, you can do specific exercises and drink more decaffeinated drinks.

Hormonal imbalance may cause your breast to become tender and enlarged. Furthermore, your nipples may grow more prominent, and the area may look darker.

However, this soreness is not permanent and goes away after a few weeks when your body adjusts to the hormone imbalance.

You might consider using a specialized pregnancy bra and warm compresses to reduce pain caused by tenderness.

This symptom is more common and may start as early as the first week of conception. You may feel exhausted and sleepy all the time. The reason behind this tiredness is not confirmed yet. However, according to some experts following factors contribute to this fatigue:

Your uterus prepares for the implantation by contracting more often. These contractions result in mild pain. Furthermore, it proliferates during the first and second trimesters initiating a pulling sensation. Usually, these cramps are not as painful as in periods.

Exercising, drinking extra water, and avoiding alcohol or smoking can help you with this cramping.

Shortly after conceiving, you might feel a change in your sense of smell. Commonly, your sense of smell increases during the early days of pregnancy. However, some women also report a reduced smelling sense. Some researchers believe that this change also occurs due to hormonal imbalance.

This change also plays a vital role in your strange food cravings. Typically elevated or lessened sense of smell continues throughout the trimesters and fades away after delivery.

No wonder changing mood is a vital sign of early pregnancy. Your body is going through a lot, both physically and mentally. The morning sickness, cramps, changing smelling sense, bleeding, and hormonal imbalance results in mood swings; everything seems to be going against you. For example, one minute you are laughing, and the next, you want to cry.

Regular exercise, talking to a partner, getting rest, and seeking help from a therapist may reduce the frequency of mood swings.

Keep Reading: How Much Bleeding Is Normal in Early Pregnancy?

Cervical mucous is a yellowish, sticky, and slippery fluid discharged from your cervix during periods. Some experts link cervical mucous with fertility. During the early weeks of pregnancy, you may also feel a change in cervical mucous. It becomes whitish and stickier, and discharge is more often than average.

The change is also due to hormonal imbalance and is suitable for you as more cervical mucous protects you from possible vaginal infection.

Some other Signs of Pregnancy

Apart from the symptoms mentioned above, there are also a few other early pregnancy signs. These signs are:

If you are feeling more than one symptom of early pregnancy, as mentioned above, take a pregnancy test after a while. If the test shows a positive result, consult with your gynecologist. It would be best if you also considered taking prenatal vitamins as described by your doctor. These vitamins play a vital role in the development of the neural tube of the baby. This tube is to be your child’s brain and spinal cord.

Must See: 10 Early Signs and Symptoms of Labor