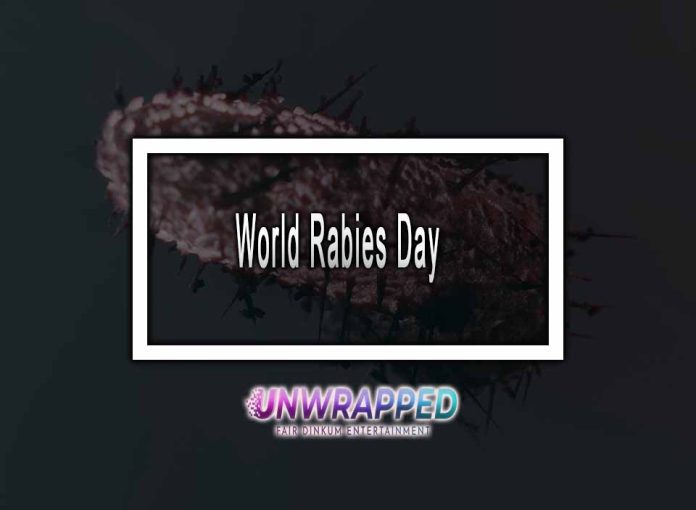 World Rabies Day is celebrated on 28 September Every year.  As a non-profit organization with its headquarters in the United States, the Global Alliance for Rabies Control (GARC) organizes World Rabies Day, an international awareness campaign. The WHO and the US Centers for Disease Control and Prevention have supported it as a United Nations Observance. On 28 September, the anniversary of Louis Pasteur’s death, World Rabies Day is observed to commemorate the development of the rabies vaccine. Every year, on World Rabies Day, an effort is made to raise awareness of the dangers of rabies, educate people on preventing the illness in at-risk populations, and support the fight against it.

As a cooperation between the Alliance for Rabies Control and the Centers for Disease Control and Prevention, Atlanta, USA, and the co-sponsorship of the World Health Organization, World Organization for Animal Health, and Pan American Health Organization. It focuses attention on an under-recognized condition. It was projected in 2009 that over 100 nations had rabies-preventative and-awareness activities; it educated almost 100 million individuals about rabies, and nearly 3 million canines were immunized during events tied to the World Rabies Day campaign.

Do you know? The 33 African nations that participated at the first Pan-African Rabies Control Network conference in 2015 urged that World Rabies Day be seen as an opportunity for rabies advocacy. As part of its National Rabies Prevention and Control Program, the Philippines’ national and municipal governments have been commemorating World Rabies Day since 2007.

From South Africa to Afghanistan, GARC organizes dozens of educational programmes so that people worldwide may learn more about how to combat rabies. The organization also encourages individuals to sign a pledge to support the Zero by 30 movements. You may also participate by organizing your event or submitting a deserving individual for a World Rabies Day award. When it comes to rabies, there are a lot of various actions that must be performed. First, do some research to be prepared if one of your pets attacks someone else or if someone else’s dog or cat bites you.

In these situations, doctors and veterinarians must follow specific protocols, so do your part to keep up with the latest developments. It’s not uncommon to see dogs, people, squirrels and skunks frothing at the mouth with rabies when we think of it. It’s crucial to remember that these are signs of fatal infection and should not be taken lightly. To eradicate rabies, we may have to change our perspective and stop viewing the disease as a horror story.

Also, Read : Top Things to Know Before You Travel to Australia

Where in the world is rabies?

Around the world, rabies kills more than 59,000 people every year. The most affected countries are in Africa and Asia, and almost half of the victims are children under the age of 15. The good news is that rabies can be prevented through vaccination of both animals and people.