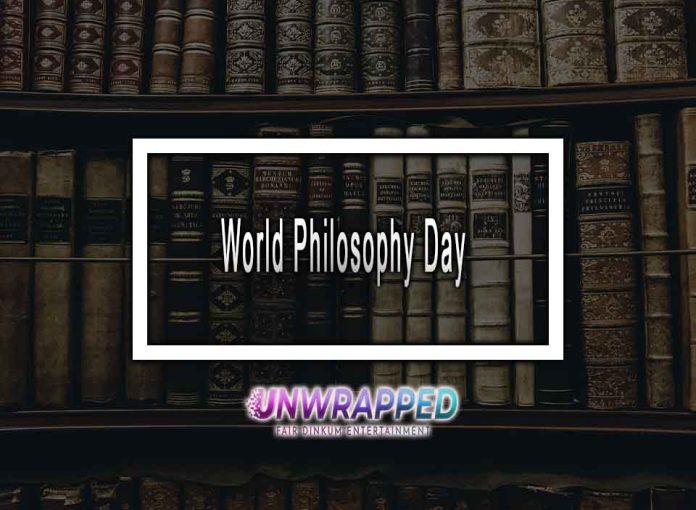 For centuries, philosophy has served as a springboard for new ideas and conceptions, creating the groundwork for critical thinking, self-reliance, and inventiveness across civilizations. To recognize philosophical views throughout the globe, UNESCO established World Philosophy Day in 2002 to create places and encourage people to share their intellectual legacy, open their minds to new ideas, and stir public discussion on society’s concerns.

In 2004, UNESCO’s Director-General Koichiro Matsuura issued a statement highlighting the significance and significance of World Philosophy Day. He asserted that philosophical ideas and ideals such as democracy, human rights, justice, and equality have their conceptual roots in philosophy. Moreover, throughout the history of philosophical thought, it has been essential to reflect on society’s unresolved issues and unanswered concerns.

Philosophy is the study of the intellect, language, and logic as they relate to the nature of reality. We can be sure that philosophy has shaped our current world and will also shape our future planet’s society. In 2005, the United Nations Educational, Scientific, and Cultural Organization (UNESCO) established World Philosophy Day.

Do you know? At the 33rd session of the General Conference in Paris in 2005, UNESCO issued a 726-page multilingual programme and meeting document in Arabic, Chinese, English, French, Russian, and Spanish 2007. As a result of this, World Philosophy Day was declared. UNESCO’s World Philosophy Day in 2005 underlined that philosophy is essential to young people as a discipline that encourages impartial study and assessment of topics to make a decision. Furthermore, world Philosophy Day aims to promote the growth of critical and self-critical reasoning, which promotes tolerance and harmony in the world.

That’s what 2005’s general conference believed, and it’s why they decided to make World Philosophy Day a permanent part of everyday life. After the inaugural commemoration of the day in 2002, UNESCO felt it was necessary to make it an annual event in 2005. This yearly celebration encourages individuals from all around the globe to take part and share their unique cultural heritage to create a more genuine and peaceful global synchronization.

To mark World Philosophy Day, UNESCO collaborates with academic institutions, governments, and other organizations to organize a wide range of events, including philosophical conversations and debates and conferences, seminars, cultural events, and presentations. All of these could be downloaded for free and enjoyed on your own or shared with other people worldwide on any social media site. It’s even possible to celebrate by reading a philosophical book, watching a film, or watching a television series.

Involve yourself in UNESCO’s year-long celebrations at the world, national, and local levels and participate in the scheduled activities and events. Take part in discussions with philosophers and scientists from a wide range of fields and disciplines and representatives from the media, educational establishments, and the general public. Exhibitions, book releases, festivals, and philosophical cafés are just a few of the numerous fun and instructive events that can be found in the city. Celebrating World Philosophy Day helps further philosophical inquiry, studies on hot-button issues, and in-depth examinations of contemporary events.

It’s not merely a celebration or a commemoration of the entertaining activities that make up World Philosophy Day. As a result, it serves as a venue for individuals to joyfully communicate their philosophical opinions on current and historical topics and better understand the world. In this way, people from all over the world may live in harmony. Furthermore, by celebrating World Philosophy Day, people worldwide may learn more about philosophy’s crucial role in society’s future decisions about globalization or entry into a posthuman world.

Who was the first philosopher in the world?

Thales and Aristotle are considered the first philosophers in the world.

World Pneumonia Day 2022 Theme and How to Help