Why Do People Obey Unjust Authority? 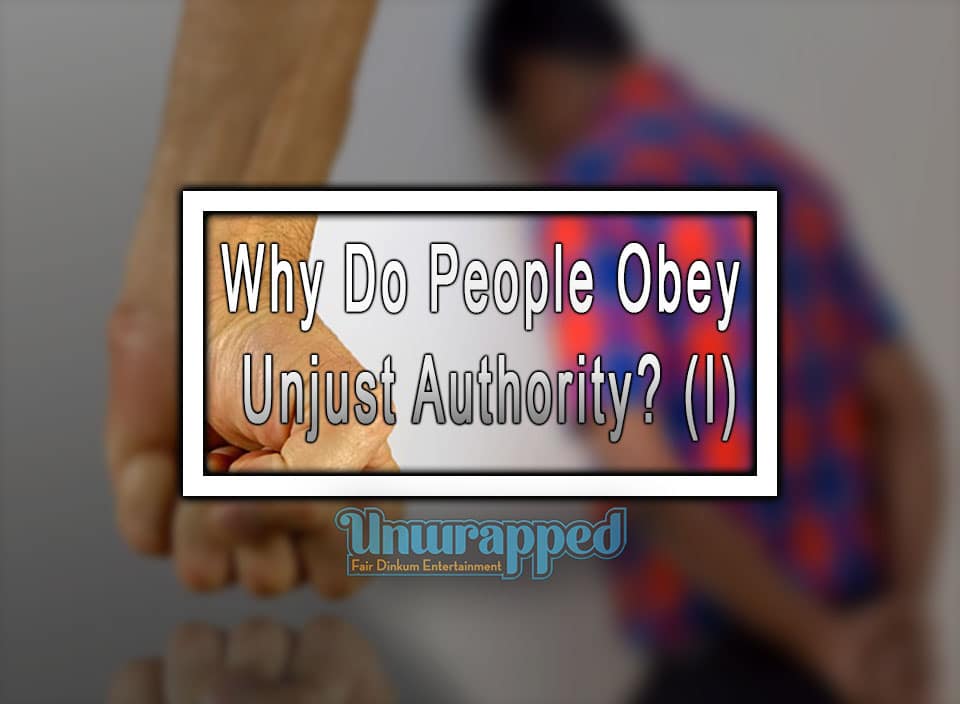 This is a complex field of human behaviour surrounded by hundreds of social and psychological studies and tests. Having said that, this can not be answered in short or simple terms. Still, we’ll try our best to be brief and not bore you with massive data, we promise.

So, why do we, as humans, bow our heads down to unjust or even cruel authority? Primarily, the leading cause is fear. You might have guessed it yourself. However, it’s not just fear on its own, because it’s followed by many other factors as well. In general, fear is a vast term and not very precise. That’s why we’ll stick with this particular case.

In this case, fear is followed by fear of punishment and consequences. That includes imprisonment, or better yet, loss of freedom, which is the highest value of human life. But it also includes smaller punishments, such as financial losses, physical, emotional pain, threatening, intimidation, etc.

On the other hand, fear of all those things might not be the cause of obeying unjust authority at all. There are always those who seek profit from such circumstances. So, they keep their head down, stay quiet, and keep doing what they are told because they made a “deal with the devil”. Simply put, they’re motivated only by greed and have no self-respect, proud or shame. They too are afraid, don’t get us wrong, but their greed is just a little bit stronger than fear. Otherwise, they wouldn’t dare team up with the bad guy, because, as we all know, that rarely turns out well.

Still, both fear and greed have one thing in common – blindness. We’ll explain that in the next section.

Also See: Workouts to Get Back in Shape at Home Geo Life – Day 21

What thought pops up in your mind first when you hear those words “cruel authority”? Dictatorship, autocracy, or maybe even George Orwell.

Now, that is an entirely different level of fear. It is the primal fear that originates since the dawn of mankind – well, at least our mankind, we’re not talking about Neandertals. This fear occurred about 200.000 years ago, when humans evolved to Homo Sapiens, to conscience beings. That’s when the roots of religion were created. Why? Because of the fear of death, primal fear, fear of the unknown.

So, the answer to this question “why do people obey cruel authority?” is quite apparent. They fear death, as we all do. It’s natural and inevitable. Cruel authority doesn’t show justice, let alone mercy, and it exploits our primal fear to stay in power. So, the first reaction in most people is to obey its rules. They choose to be blind. Because the opposite of that is most likely death.

The famous philosopher, Machiavelli (15th – 16th century), said: “The ends justify the means.” – a well-known quote today. But does it really? The answer is not simple, and it has many layers. For example, let’s say you have to take one life to save a hundred. In that case, yes, this quote is valid. Sad, but valid. However, many leaders throughout history misused this concept to their own advantage. Such as the Russian tyrant, Joseph Stalin, who killed millions of people; Mao Zedong, a Chinese dictator, who also killed millions of innocent people; both of them communists. And ultimately, we have the worst one of all, Hitler. We’ll talk about him and his extinction attempt of humans in the other article.

All in all, the question is answered as simply as possible. Although that question is followed by another important question – should you obey such unjust or cruel authority? We’ll let Orwell answer that one since he is the real expert.

“The fallacy is to believe that under a dictatorial government, you can be free inside.” – George Orwell, 1984 – a book you must read if you haven’t already. So, the answer is no. Plain and simple. We must resist tyranny because being free in death is better than being alive and unfree. Hell, even Mel Gibson thought so in Braveheart: “They fought like warrior poets…and won their freedom!”

You can read part two of this topic here – Why Do People Harm Others?