When is World TB Day and What Theme 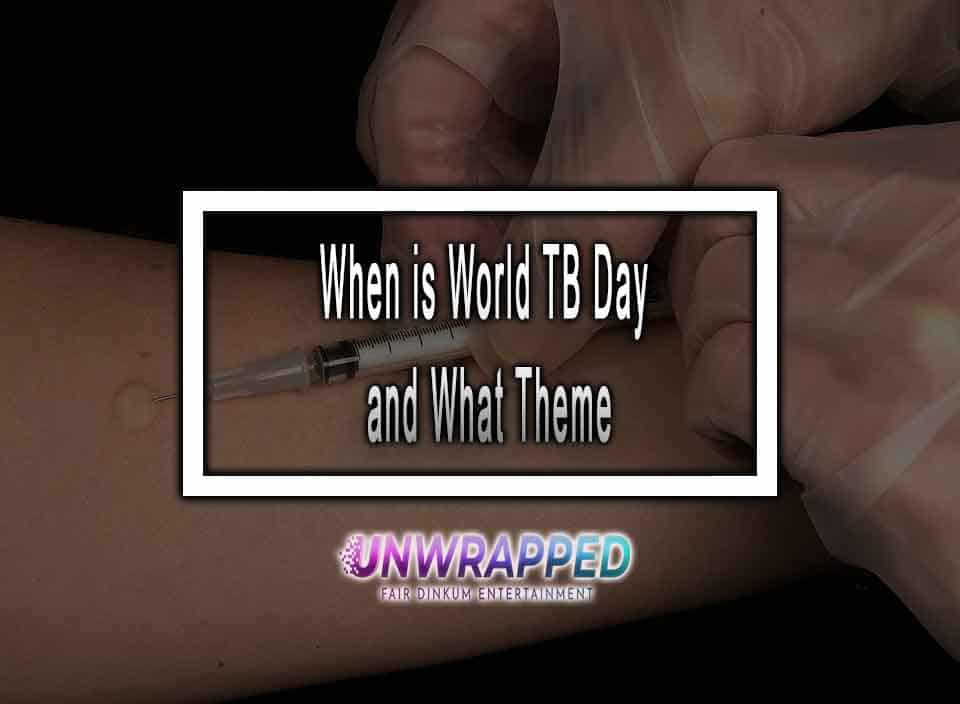 World TB Day is celebrated on 24 March every year. World TB Day is celebrated to promote public awareness and understanding of tuberculosis (TB), one of the world’s deadliest infectious killers, and its catastrophic health, social, and economic effects on people worldwide. Dr Robert Koch discovered the bacteria that causes tuberculosis on 24 March 1882, which paved the road for identifying and curing the illness.

TB kills over 4100 people per day, and about 30000 individuals get the disease. Antimicrobial resistance is exacerbated by tuberculosis, the primary cause of mortality among HIV-positive patients. World TB Day is a chance to concentrate on the individuals impacted by the illness and advocate for immediate action to stop TB misery and fatalities, particularly in the current COVID-19 crisis.

In 1982 international union against tuberculosis and lung disease, on the anniversary of Robert Koch’s, demanded that 24 March be declared as official World TB Day. The IUATLD and the World Health Organization (WHO) collaborated in a year-long centenary project called “Defeat TB: Now and Forever.” However, the World Health Assembly and the United Nations did not formally recognize World Tuberculosis Day as an annual event until more than a decade later.

On World TB Day in 1998, almost 200 groups participated in public outreach activities. As a result, WHO named the top twenty-two nations with the world’s most significant TB burden for the first time during its World TB Day press conference in London in 1998. A three-day WHO/KNCV preparatory World TB Day 1999 drew over 60 prominent TB activists from 18 countries.

At the Mahavir Hospital in Hyderabad, India, US President Bill Clinton commemorated World Tuberculosis Day 2000 by delivering the WHO-recommended Directly Observed Therapy, Short-Course (DOTS) therapy to patients. These are personal tragedies, economic disasters, and far more than crises. They are global issues, according to Clinton. Disease spread is the one global issue to which no country is immune.

On World TB Day 2014, the National Collaborating Centre for Determinants of Health in Canada stated that 64 per cent of TB cases recorded nationwide were among foreign-born individuals and 23 per cent among Aboriginal people, emphasizing TB as a critical issue of health equality concern. In addition, the Stop TB Partnership, a network of organizations and nations battling tuberculosis (the IUATLD is a member and WHO maintains the Stop TB Partnership office in Geneva), celebrates World Tuberculosis Day today to raise awareness about the disease’s extent and how to prevent and cure it.

World Tuberculosis Day strives to raise awareness that tuberculosis is still a global disease, killing around 1.6 million people each year, primarily in the world’s poorest countries. Do you know? On 24 March, Dr Robert Koch announced the discovery of tuberculosis bacillus in 1882. The first step toward detecting and treating a disease ravaging Europe and the Americas at the time, killing one in every seven persons.

HIV and tuberculosis are connected in that they both hasten the progression of the other. In addition, because HIV impairs the immune system, someone HIV-positive and infected with tuberculosis is far more likely to develop TB than someone who is HIV-negative. As a result, TB is a primary cause of mortality among HIV-positive persons, and HIV is the main factor contributing to the rise in TB prevalence in Africa since 1990.

The World Health Organization on 24 March will host a unique virtual discussion show to honour World Tuberculosis Day. It will focus on tuberculosis (TB) under the theme “Invest to End TB & Save Lives” it emphasises the urgent need to invest resources to up-lift the battle against TB and meet global leaders’ promises to end TB. In addition, it is essential to highlight the COVID-19 epidemic, which has jeopardised End TB progress and provided equal access to prevention and treatment in line with WHO’s goal of Universal Health Coverage.

The event will be broadcast live on WHO’s an interactive web platform, End TB Forum, in a talk-show format with speakers connecting by video. The primary speakers will be ministers, leaders, other high-ranking government officials, heads of agencies, TB survivors, civil society, and other partners. In addition, the show will be streamed live online, with an interactive Q&A session with the audience.

Must See: The Monumental Importance of Good Website Design for Businesses