Why And When Is It Advisable To Sift Flour 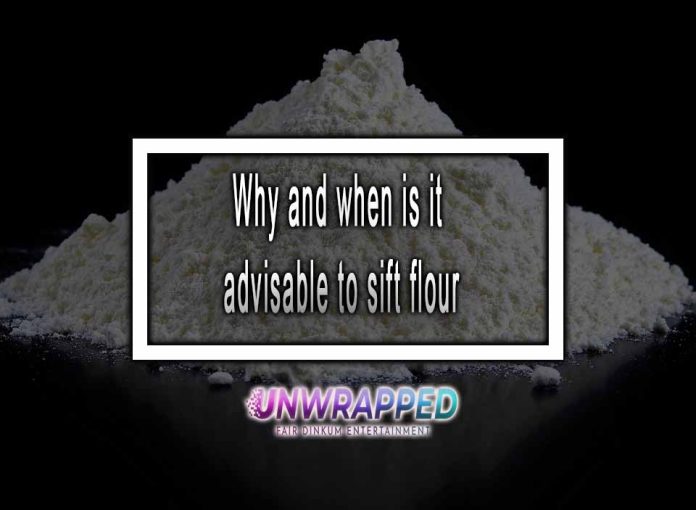 When To Sift Flour

Flour is a product that is used in a variety of recipes in the culinary world. We come across recipes that instruct us to sift the ingredients before using them in several instances. Sieving is nothing more than putting it through a fine strainer known as a sieve in order to break it down into even smaller particles while preventing it from being caked on the inside.

When it comes to the confectionery sector, the sifting of flour is quite important since it allows us to make our products lighter in weight and more fluffy.

We may eliminate any lumps that may have developed as a consequence of the humidity in the air or during the packaging process by sifting the flour. Put wheat particles through a sieve to separate them and enable them to aerate them as they are separated. The presence of this “bubble” of “air” is what contributes to the sponge cakes’ sponginess and lightness in texture.

Additionally, sifting the flour is a useful strategy for removing any possible impurities that it may have had in the first place. Either a few grains of sand or a few little stones are left.

The finer and more homogeneous the combination of the different components becomes as a consequence of the sifting process, which results in a better texture in the finished product. In general, we only use high-quality flours these days, thus the end objective of running them through a sieve is often to aerate them before baking rather than to remove contaminants.Ultimately by sifting flour, you are removing any clumps your flour might have and adding air into your flour. If the recipe you are using calls for sifted flour and you don’t sift it, you will end up with too much flour, potentially making the item too dry.

Using a sieve to sift the flour is the most effective method of doing so. A metal grid is inserted in the bottom of the tool, which makes the tool spherical and flat. It is possible that the thickness of screens will vary. If we don’t have a sieve, we may use a colander instead, as long as the grid is fine enough for the work.

How to sift flour

Place the flour in a strainer and tap lightly on the side to allow the finer particles to pass through; the coarser particles will be kept once the flour has been strained.The flour in cakes with a very light, delicate texture like genoise, angel food, or sponge should be sifted to eliminate and prevent lumps that would weigh down the batter.

Generally speaking, pastry recipes call for us to sift the wheat flour. However, we may use maize flour, almond flour, rice flour, and other dry ingredients to get the similar results as described before. If we sift the flour before baking bread, we will get a loaf that is lighter and fluffier. It is important to remember that the volume of the flour varies after it has been sifted.

There is just one difference: the wholemeal flour is not sifted before use. The assumption that this kind of flour is unrefined is justified given the fact that it is distinguished by the preservation of a portion of the grain’s shell, which provides a significant contribution of fibre and vitamins from the group B vitamins.

Also, Read :How Can CBD Gummies Help You in Sleep While You Are Travelling

When should you sift flour?

Stay Connected
41,936FansLike
5,684FollowersFollow
820FollowersFollow
Previous article
When You Look At The Food Pyramid
Next article
Types Of Summer Desserts

Top 10 Of the Best Port Wines to Buy in Australia

Unique Australian Foods to Try Before You Die