What Medication Is Used for ADHD? 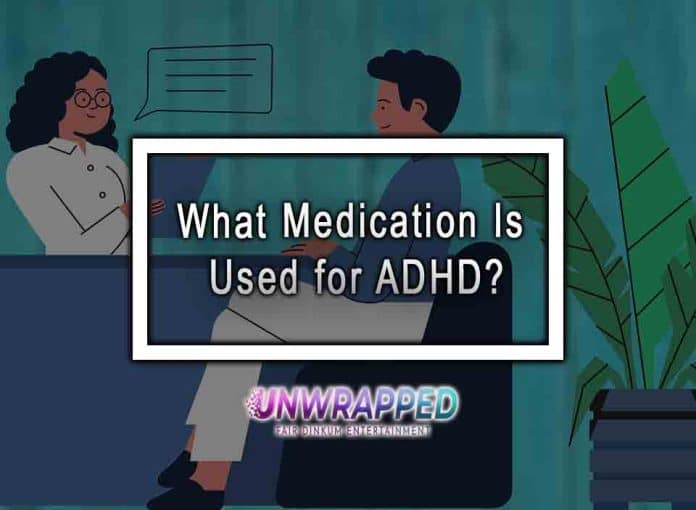 The most common medication used to suppress ADHD symptoms are dextroamphetamine, methylphenidate, guanfacine, and atomoxetine. Other drugs are available to reduce the symptoms of ADHD; however, most of these medications don’t have the right approval from relevant regulatory bodies.

Proper medication is vital to reduce the effects of ADHD and doctors may prescribe other drugs not listed above. Symptom control is the major focus of ADHD medication as no express cure is currently available.

In this article, you will find relevant information about available drugs used to reduce ADHD symptoms. Taking cues from this article makes it easy to identify effective ADHD medications and their accompanying side effects.

Check This: How to Study With ADHD?

Most Popular Types of ADHD Medication, Reaction Times, and Side Effects

ADHD medications might not be effective for all symptoms or exhibit similar side effects in everyone. In most cases, multimodal treatment is the most common method to reduce the symptoms of ADHD.

Multimodal treatment involves a mix of therapy, medication, skills training and orientation for behavioral changes. The most popular treatments for ADHD include stimulants, antidepressants, and non-stimulants.

Stimulants are popular drugs used for treating ADHD and other disorders. Medicines in this category help increase thought focus capabilities and assists people to ignore distractions.

Reports show that stimulants can be effective in 4 out of 5 people living with ADHD. Most stimulants are effective for treating severe and moderate ADHD symptoms.

Anxiety, depression, and bipolar disorders are some of the most common symptoms in people living with ADHD. Antidepressant medications helps people control issues with their mental health and other conditions.

In some cases, antidepressant medication are prescribed along with stimulants for increased effectiveness.

In some cases, stimulants may not be effective or cause massive side effects in people who take the medications. Non-stimulant medications are recommended for such people to avoid side effects of stimulants while suppressing ADHD.

These medications help improve impulse control and concentration and may be effective in people with mild to moderate ADHD.

The most common side effects of these drugs include sleep problems, reduced appetite, weight loss, and crankiness. Medicines with long-acting potential might have an immense effect on sleep and appetite.

Warnings from the FDA advises against the use of these drugs due to its increased potential to cause substance abuse. Also, some of these drugs with methylphenidate and amphetamine can increase the risk of psychiatric and heart problems.

Short-term Medication and Their Side Effects

An increased risk of drug abuse drives the FDA warnings against using these medications. Safety advisers are concerned about the potential of methylphenidate and amphetamine stimulants to cause psychiatric and heart problems.

Non-stimulant ADHD Medication and Their Side Effects

Non-stimulant ADHD medication might not take effect until several weeks after. In some cases, these drugs might show signs of action within the first 7 days.

However, these medications might not function at the same level with stimulants ideal for treating ADHD.

ADHD medications may cause an increase in suicidal thoughts and may be a drive of suicide attempts in young people. Warnings from the FDA advise against the use of some of these drugs because of increases in suicidal tendencies.

Anti-depressant ADHD Medication and Their Side Effects

The medications above can help treat common ADHD symptoms. Doctors can recommend some of these drugs even if the medications don’t have FDA approval.

Common side effects apart from the ones described above are sleeping issues, constipation, sweating, sex drive issues, and nausea. Several warnings from the FDA also link antidepressants with an increases suicide risk in teens and young adults.

Apart from medications, different kinds of therapy might be effective against ADHD in people across age groups. Therapy can also prove effective in treating other problems, like anxiety disorders for example.

The most common therapies for treating ADHD include:

The therapy equips caregivers, teachers, and parents of children living with ADHD. It mostly adopts behavior management, which relies on a reward system to encourage children to suppress ADHD.

Parents, teachers, and caregivers can identify behaviors that should be encouraged in ADHD children and give out good rewards for people who complete it.

Structuring and planning activities to encourage children with ADHD for progress made is another form of this therapy.

The therapy includes several role-play scenarios designed to teach children how to react and behave in social situations. It also involves learning methods aimed at understanding how a person’s behavior affects others.

This therapy mostly involves conversations about how to change thinking and behavior patterns towards suppressing ADHD. Therapists usually employ this method to alter how a person feels about certain situations.

Being able to manage the situation effective is a potent method to changing behaviors towards controlling ADHD.

Discussing ADHD and its effects is an effective form of psycho-education. Talking about how ADHD affects an individual is a potent way to encourage people to manage the condition properly.

Is It Safe to Use ADHD Medication without Supervision?

Most experts say it is essential to use medicines for ADHD under strict monitoring by qualified professionals. Serious side effects from using ADHD medication are not common.

However, you are advised to discuss the dangers and benefits of taking such drugs with your physician.

Consulting your doctor before ingesting any ADHD medication is entirely for your safety. Shun self-medication to retain your health while suppressing the effects of ADHD.

Read More: Psychiatrists vs Therapists: Differences and Similarities Between the Two

Does ADHD Medication Work for Other Conditions?

4 out of 5 people living with ADHD either have a preexisting or new health condition. In most cases, the accompanying condition usually affects such individuals’ mental wellbeing.

The most common forms of such ailments are personality disorders, substance/alcohol abuse problems, depression, and anxiety. Medication for these conditions can influence ADHD.

It’s also reported that some ADHD medication can manage the symptoms of several conditions listed above.

However, some medications to solve both problems (ADHD and accompanying condition) may cause severe adverse symptoms.

Consulting an experienced physician is the best way to combine treatments for both conditions without damaging side effects. Your doctor can recommend treatments for ADHD and another condition while ensuring both meds don’t cancel each other out.

In most cases, the suitable treatment plan for ADHD largely depends on a patient’s mental health.

Interesting: What Are The Most Interesting Psychosocial Disorders To Explain?

Stay Connected
26,306FansLike
5,627FollowersFollow
351FollowersFollow
Previous articleWhat Are The Most Interesting Psychosocial Disorders To Explain?
Next articleSpiraling Down With Benzos Addiction – How Has It Affected The Entertainment Industry?

Spiraling Down With Benzos Addiction – How Has It Affected The Entertainment Industry?

What Are The Most Interesting Psychosocial Disorders To Explain?

How to Study With ADHD?

How to Help Someone With OCD?