Vitamin K: What Is It For And Where To Find It 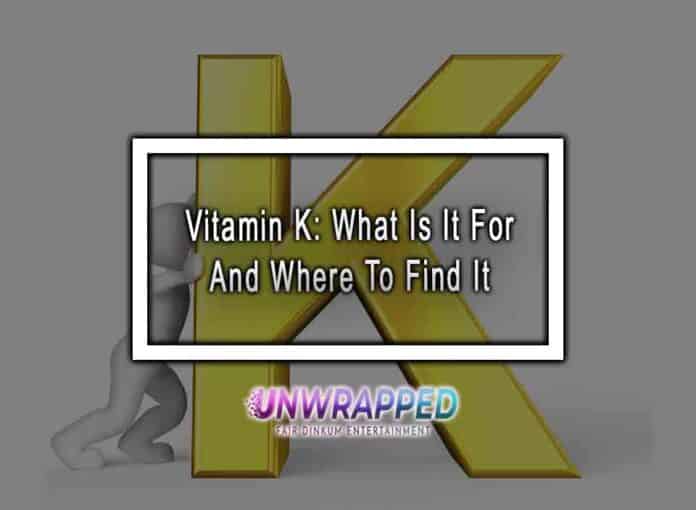 Vitamins cover a wide range of topics. Vitamins A, B, C, D, E, and K are all present. And that’s precisely what we’ll be discussing today. Do you have any idea what it’s for? What else can we look for it? Come along with us!

To begin, we must understand that there are two varieties of vitamin K: K1 (phylloquinone), which is found in plants, particularly green leafy vegetables like kale and spinach, and K2 (menaquinone), which is produced naturally in our digestive system.

The blood clotting mechanism is one of vitamin K’s key activities in our bodies. This is a method for avoiding excessive bleeding both within and outside the body.

Vitamin K is required for our bodies to manufacture the proteins required for clotting. Excessive bleeding, for example, might be one of the reasons for our bodies’ lack of essential nutrients. Experts also think that vitamin K aids bone formation and health, however this association is still being researched.

Adults with vitamin K insufficiency are uncommon, since most meals contain enough quantities of K1 and our bodies create K2 on their own. Furthermore, the quantity of vitamin K in the body is constantly recycled. However, some medical conditions and drugs might prevent this vitamin from being absorbed and produced, resulting in insufficiency.

On the other hand, Vitamin K insufficiency is far more frequent among infants. Vitamin K deficiency bleeding (VKDB) is a disease that affects newborns. We’ll go through this in further detail later.

Excessive bleeding is the most common sign of a vitamin K deficiency, as previously stated. It’s worth noting that humans may bleed in areas other than cuts and wounds, and that this can be seen if someone:

Vitamin K’s significance and the hazards associated with its shortage are well known. Now, how about a list of ten vitamin K-rich foods? There is a connection there:

The vitamin K content of half a cup of cooked kale is 443 percent of the daily recommended amount. Isn’t that kale thing a disaster?!

A cup of raw spinach has 121 percent of the daily required vitamin K intake. Popeye has no problems with blood coagulation.

Half a cup contains 92 percent of the daily recommended vitamin K intake.

It’s nearly as much as a cup of boiling broccoli. A half-cup dose of vitamin K provides 91 percent of the daily value.

This beef liver provides 88 percent of the recommended requirement of vitamin K in only 100 grams.

We offer chicken for individuals who want a meat alternative other than the liver. In 100 grams of chicken, you’ll get half of your daily vitamin K need.