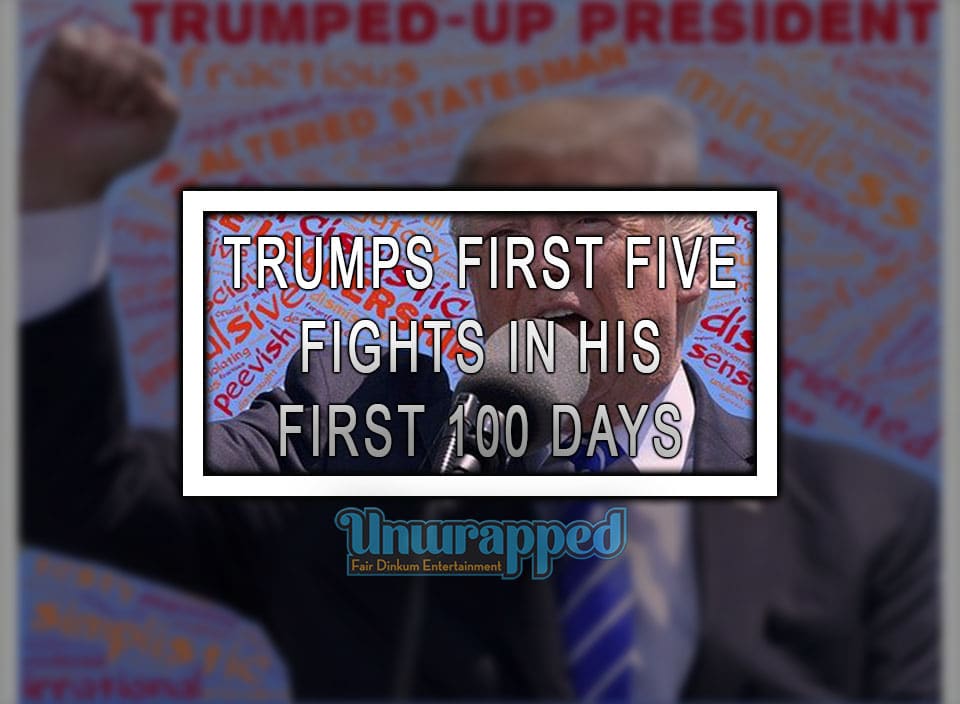 Trumps First Five Fights – Federal legislators will return to Capitol Hill in January 2017 with a full plate of controversial subjects that could juice up the first hundred days of President-elect Donald Trump.

Republican lawmakers and the Trump administration are keen to move quickly after gaining control of both Congress and the White House for the first time in almost a decade.

While Trump’s administration may like to start on the offensive, divisive warring with the Democrats, and within the Republican Party, could grind the Congress to a halt, and quickly test that ambitious agenda of GOP.

Here are five fights that await lawmakers and Donald Trump next year:

Democrats are set for a fight over Donald Trump’s slate of nominees for his Cabinet, arguing that the pick reflects larger concerns they have about the President-elect.

Fifteen Democrats Senators, as well as Independent Senator Bernie Sanders (Vt.), released a rare joint statement that calls for the confirmation hearings to be put off until federal lawmakers could thoroughly examine the picks.

Democrats mentioned that it would include passing an FBI background check, as well as turning over forms of financial disclosure, an ethics agreement, and to satisfy “reasonable requests for information.”

GOP, though, are set to move the picks as quickly as possible after they are nominated.

Democrats will face an uphill battle to stop any of Donald Trump’s nominees. GOP will control fifty-two seats in the Senate; this means Democrats would need at least three votes from GOP and no defections to halt any nominations.

A few senators are not backing down from the fight; they accused Donald Trump of compiling a “rigged” Cabinet. Democrats claim picks like Rep. Tom Price (R-Ga.) to lead the Health and Human Services Department undercuts Trump’s pledge not to cut social welfare programs.

According to Sen. Charles Schumer (D-N.Y.), the incoming Senate Minority Leader, “If Republicans in the Cabinet or Congress declare war on seniors and working families, Democrats will not let them win that fight,”

Democrats are also projected to try to amend the Senate rules to mandate Cabinet nominees to release their tax returns from 3 years.

Trump and lawmakers appear to be heading on a collision course over Russia.

Some Senators, wary of President-elect Trump’s warmer remarks about Russian President Vladimir Putin, were at present planning to take a tougher line than his administration, including a potential new sanction.

But Trump’s decision on picking Rex Tillerson to lead the United States’ State Department paired with allegations of election hacking are bringing the fight straight to the fore.

Some “hawkish” Republicans and Democrats, worry that the pick signals Trump will be a bit soft on Russia.  Tillerson as CEO of Exxon had business dealings with Moscow, and he is believed to be very friendly with Vladimir Putin.

Senator Lindsey Graham (R-S.C.) warned that he will be a “bit of a hard-ass” on Moscow and is calling for more “crippling” sanctions. Senator Ben Cardin (D-Md.), the top Democrat Senator on the Foreign Relations Committee, is working on a bipartisan bill to crack down on Moscow.

The committee is also set to investigate the hacking allegations as part of a wider series of public and private hearings that will begin in January on the U.S. A.’s posture on Russia.

GOPs will lay the foundation in January for repealing the Affordable Care Act, kick-starting a new stage in the long fight over outgoing President Obama’s signature law.

McConnell told some reporters that the ObamaCare repeal bill would be the first item on the agenda of the Senate.

The legislation would not out rightly repeal the Affordable Care Act. Instead, GOPs are expected to pass a shell budget that will include instructions for rolling back large swaths of ObamaCare under reconciliation.

The process will allow lawmakers to repeal a part of the law under a simple majority, bypassing the Senate threshold of 60 votes. The House of Representative is also expected to pass a vote on the reconciliation instructions on January 9th, according to the Energy and Commerce Committee released timetable.

Though GOP lawmakers are keen to repeal the law, there is little consensus on the details of how or when to replace it.

GOP Senators will also likely need 60 votes to pass a replacement plan; this means they will need to win a handful of Democrats over.

While Schumer blasted the Republican effort to repeal ObamaCare, telling GOP to “bring it on,” other Democrats took a softer stance, while still criticizing the Republicans tactics.

“I’m not going to reject working with them, or at least considering what they put forward,” said Sen. Dick Durbin (D-Ill.) — who will be Schumer’s Number. 2 — while he also called the Republican strategy a mistake.

It will mark the first time US Congress will vote to increase the debt ceiling since a 2015 deal between outgoing President Obama and former-House Speaker John Boehner (R-Ohio).

The House Freedom Caucus, who normally demands any bump be combined with spending cuts, will have to enter into negotiation for the first time with a Republican president.

They could be reassured by Trump’s decision to appoint Rep. Mick Mulvaney as director of the Office of Management and Budget, a decision that quickly earned Trump criticism from liberals.

The second deadline will be on April 28 when lawmakers will have to pass a government funding bill or risk a shutdown of the government.

Legislators have given a little hint on what a spending deal under the Trump government could look like, but the Hawks in defense are expected to try to increase defense spending through a stand-alone bill potentially.

The move would run into an almost certain opposition from Democrats in the Senate, who will want an equivalent rise in non-defence spending. Senate GOPs need at least 8 Democratic votes to pass an appropriations bill.

Federal Lawmakers will also have until April 28 to prolong healthcare for over a hundred thousands of miners and their respective families.

The fight came to public light after Senator Joe Manchin (D-W.Va.)- led Democrats threatened to hold up a government funding bill a few weeks ago as they pushed for a year-long extension of miner’s benefits.

But Democrats ultimately gave in, by accepting the 4 four-month extensions included in the continuing resolution (CR) and they pledged to continue the fight in the year 2017.

McConnell had told a reporter earlier this week that lawmakers would return to Capitol Hill and work toward getting a “permanent fix.”

“Their healthcare deserves to be protected,” the Kentucky Republican said. “It’s collateral damage from the decline of the coal industry.”

A Honeymooning Woman Was Killed In A Buggy Accident On Hamilton...