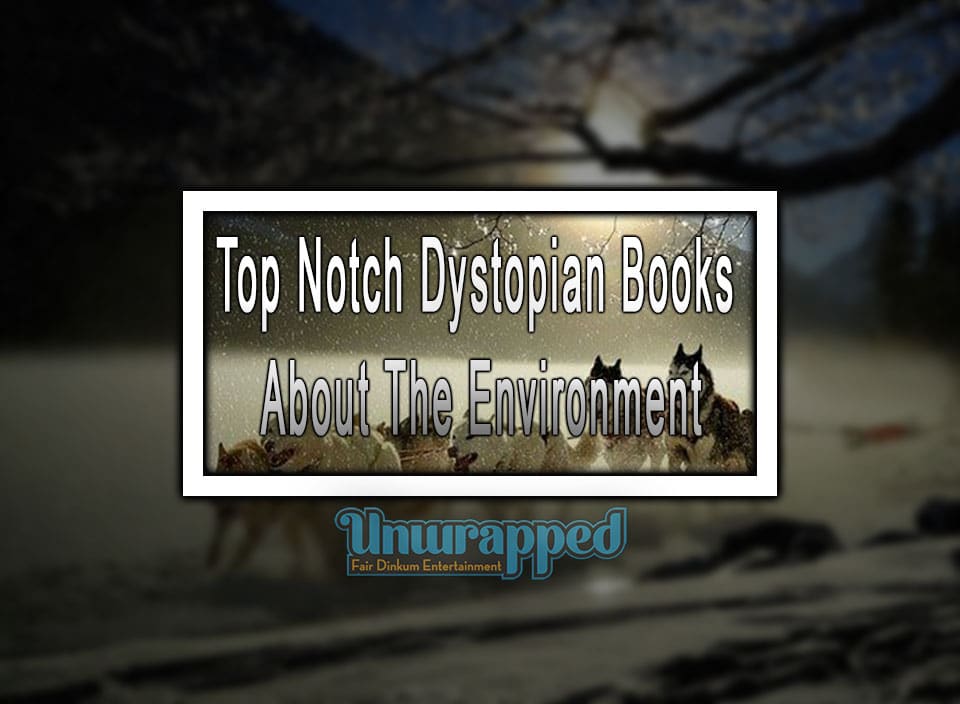 Novels Based on Environment in The Dystopian Genre

Global warming is not a thing in the past. We are all fighting it for years up until today while enduring everything else in between.

Everyone is doing their part to convey and bring awareness about it by expounding the possible ramifications that may come from it while others express their desire by providing tips and strategies to combat it.

Yet, some communicate their intentions through literary works and creative writings, such as the authors of these dystopian environmental novels that I came across.

Negative impacts brought by excessive pollutions due to our disregard to our ecosystem are among the best and most applicable sub-themes in any novels with a dystopian genre because it gives us the literal meaning of a “bad place” (dystopia), or the ultimate depiction of a “good place” (utopia) that has gone awry.

And so, without further delay, here are a scattering number of dystopian environmental novels that you can read and reflect on while you go through the pages of the narratives.

I’ll begin with a few of the remarkable novels from my old collection of dystopian books. You might have read some of them already, but for those who haven’t read them yet, please do so.

This 2003 novel is one of the most notable works of highly-acclaimed Canadian author Margaret Atwood.

“Oryx and Crake” delved into a wide variety of sub-genres or themes in one single plot from speculative fiction, romance, adventure, sci-fi, and dystopia. Moreover, Atwood mainly pictured out a post-apocalyptic world brought by mankind’s disgrace and greed of power and authority.

In a feature by “Penguin Random House,” one of Atwood’s inspirations in writing this book is when she visited the Arctic North in 2001 during summer, where she witnessed the effect of global warming in the area.

Her attentiveness and creative power moved her to write more sensible narratives, trying to bring enlightenment to the world, especially during the unforgettable attack on September 11, 2001. She explained what will happen if we continue such a terrible road.

Do Androids Dream of Electronic Sheep?

Philip K. Dick also illustrated a world devastated by the “World War Terminus,” which is a global war that radioactively poisoned the earth’s atmosphere.

One of Dick’s inspirations in writing this novel is his reflection and understanding of what’s going on with the world today and the effects of technological advancements and alike.

In his novel, he refers to the environment as a whole, including mankind and technology.

With intentions to create a contrast between mankind’s behaviours and culture, he depicted the android antagonists as more human than the main man in the story, the protagonist

A Canticle for Leibowitz

Another outstanding novel that depicts a dystopian environmental theme is “A Canticle for Leibowitz” by Walter M. Miller Jr.

The author illustrates a post-apocalyptic world, which is the earth on the ruins after the “Flame Deluge” global nuclear war occurred. Due to people’s intelligence in creating technological and scientific advancements, including nuclear weapons, and the greed of power, the world becomes a wasteland.

Thus, mankind fears for scientific intelligence that one human possesses turning them into savages, attacking other humans who still hold the drive to learn and the knowledge, as they go forward for “Simplification.”

“A Canticle for Leibowitz” shows us how the world will become if people become greedy with the intelligence and power they have.

Multi-awarded author Paolo Bacigalupi centres the setting of his 2009 novel “The Windup Girl” in the 23rd century, where the world’s global warming has increasingly raised the levels of the earth’s oceans.

Along with it is the depletion of the carbon fuel sources, and the only main energy storage is the manually manufactured wound springs. Dominating in the world in this devastating time is the biotechnology. Mega calorie corporations control food production and also used them for terrorism.

In the middle of it, are the perpetuating catastrophes like widespread plagues or deadly diseases brought by genetically modified crops and pests, bringing ravage to the entire population of the human race.

Nevil Shute wrote his 1957 classic novel “On the Beach” after he moved to Australia. He plots his story on the brink of what seems to be almost the world’s end.

After the nuclear war broke out a year earlier than the date of his narrative, deadly radiation is killing the population and everything on earth. Diverse people in Melbourne are waiting for the ruinous and poisonous radiation.

As a group of scientists is out and about to research on continuous environmental development in flooded and deserted ruins of London, Ballard showcases the unexpected rapid evolution and tropical temperatures in “The Drowned World.”

The book’s title clearly outlines a drowning world due to flooding and other cataclysmic catastrophes brought by global warming.

While going through other dystopian environmental novels, I came across or caught myself fascinatingly enthused on these remarkable additions to my collection that you will also, definitely, get engrossed with as you go through each of the pages.

The author tells a story about how the earth will end with the ongoing catastrophic climate change. Jemisin invites her readers to imagine dismantling the world to the core and bringing new world and citizens into it under continuous fight against climatic instabilities.

In a future setting, global warming brought ravaged to the world is Cherie Demaline’s 2017 novel “The Marrow Thieves.”

Due to the catastrophic devastation, most of the human race have lost their drive to dream, and this leads to massive madness throughout the land. The only people who can still dream are the indigenous people.

Hence, some are hunting them to steal and use their (bone) marrows in creating serums to treat others who lost the ability to dream.

Adding to the award-winning list of Paolo Bacigalupi’s dystopian novels is his 2015 book entitled “The Water Knife.”

In an undetermined date in the future setting, the Southwestern United States has been severely damaged by drought transpired due to the increasing heat and immense shortages of water that came about because of the impairing effects brought by climate change.

Where Late the Sweet Birds Sang

This 1976 classic masterpiece of Kate Wilhelm lays out a post-apocalyptic era of dystopia brought by the massive pollution.

“Where Late the Sweet Birds Sang” backdrops a ravaged world that resulted from the massive effects of environmental changes and global spread out of diseases.

Wilhelm created three-part plots of this novel starting from the “Where Late the Sweet Birds Sang,” going to “Shenandoah,” and lastly, “At the Still Point.” Due to the impending global disasters coming from nuclear warfare and diseases, everyone becomes infertile.

In their quest to survive and preserve the humankind by returning the natural biological reproduction process, they start to clone each other using mice as their experimental guinea pig.

Set in 2050, the author shows us the chilling reminder of how our world will become if everything crumbles and shrivels. This two-book series under the namesake of its first novel tells us the damaging effects of the division in politics and what will happen if we’re not going to act on it immediately.

Conclusively, all these dystopian environmental novels are giving us a reminder and an awareness of the ravaging effects due to the ramifications brought by global warming, political standpoints and differences, and the greed of power and authority as well as how mankind takes care of the ecosystem in general.