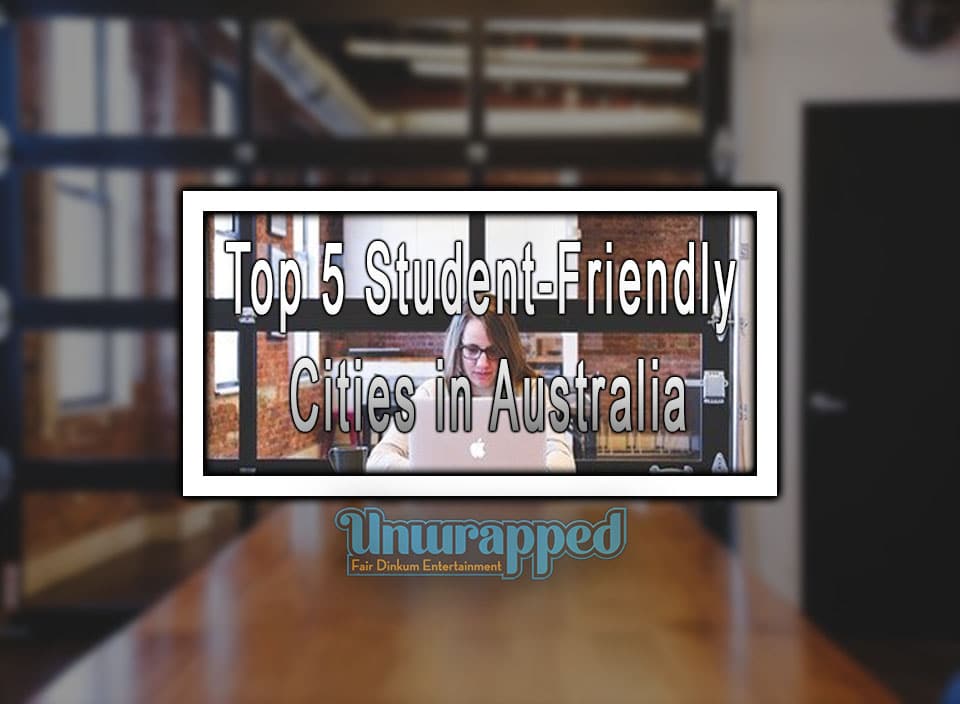 Visiting? Here are The Top 5 Student-Friendly Cities in Australia

Are you planning to pursue higher education abroad in Australia? In Australia, not only you’ll be provided with excellent academic courses with quality education and learning environment but you’ll also enjoy pleasant city life and recreational opportunities.

Following are the best student-friendly cities in Australia for those who are visiting Australia as a student. The cities are chosen based on the quality of education the universities there offer, their rankings, and affordability. However, apart from the academic department, all the cities offer a ton of entertainment and recreational activities that promise a pleasant student life.

Melbourne is ranked as the top cultural and educational centre of Australia. Also, it retains second place as the most liveable city globally. Melbourne provides us with seven globally recognized universities featuring in the international rankings. The student mix index in Melbourne is among the best in the world and multicultural exchange programs are another one of the perks of its student life.

Melbourne is recognized as the cultural capital of Australia with offering numerous leisure to the students including live music events, comedy shows, sporting events like Formula One Racing, Australian Open Tennis and much more.

Country’s top corporation and multinational companies are stationed in Melbourne aiding in its diverse economy. Moreover, almost all of Australia’s largest business councils and trade unions have headquartered in the city of Melbourne.

With splendid beaches and superior living standard, Melbourne excels in the education and employer activity department in Australia and the world. Furthermore, its unique attractions and fascinating views enhance not just the lifestyle of its citizens but also the living desirability of students and employees.

Sydney welcomes each year more than 50,000 international students globally. The main reason for such high preference by students worldwide is the high living lifestyle and relatively greater employability ratio of Sydney. Sydney stands fourth in the index for Best Student Cities.

Sydney holds the honour of having the largest economy in Australia and is, therefore, is deemed as the financial headquarter of the country and is home to the centres of numerous multinational corporations. Sydney also stands well in the index for student mix with it’s five globally ranked universities, offering research degree programs, home to thousands of overseas students.

It also attains the top position in the desirability index thanks to its unique blend of high life quality, beautiful beaches, and lush green spaces. Nightlife offers many pleasures such as concerts, music events, and a variety of cafes and bars. You can also visit its many museums loaded with historic artifacts or enjoy live play in theatres. Apart from that, its vast wildlife parks humbly welcome nature lovers.

Every year-round about 50,000 international students from various countries come to Brisbane to pursue their higher education. Brisbane has earned the title of the “new-world” city due to its vast number of foreign students and tourists making it the third most populous city of the country. Thus, you’ll get to experience a uniquely multicultural environment.

Brisbane is recognized as the most affordable city to study in Australia. Moreover, among many world-class universities, four are among the QS world rankings. Local Universities in this city are known to charge relatively low tuition fee which is another reason for the city’s high-preference among students worldwide.

You have the option to select from over 9000-degree programs offered at all Bachelor, masters, and postgraduate levels. Furthermore, the city also offers leisure to relieve the stress from studies for students. Brisbane hosts the Buddha Birthday festival every year that is known to be the largest in the world. There are various hot air balloon centres to make you fly over the beautiful city heights. You can also visit its magical islands and bay sites.

Canberra is a host to the more than 35,000 students among which 9000 are international students. You can choose from either of the two universities of the city among which is the top-ranked and globally recognized Australian National University. Like all other Australian cities, Canberra to scores quite well in the ‘student mix’ category due to its multicultural environment with students and employees from all over the world.

Canberra’s vast and diverse population of students has proved to be attractive to students globally.  Most of the international students residing in Canberra are of the view that the city is vast enough to be captivating and yet concise enough to not be overcrowded.

Canberra offers many unique attractions to its citizens and visitors. In the city centre, there is a man-made lake attracting the mass of people because of its notability. Moreover, there are numerous nature reserves including the Captain James Cook Memorial and the Black Mountain Tower. Or, you can also attend the international football tournaments held every year.

Perth is a lovely place admired by visitors and tourists due to its warm and pleasant climate, splendid beaches, and numerous social and cultural activities it provides. Although there are many local universities in Perth that offer world-class education, however, among them are the three universities that stand in the QS world universities rankings.

These top three universities are known to be the best in terms of improving and supporting the social life of students. In Perth, the students are encouraged to concentrate more around campus activities as the universities are at a considerable distance from the city.

Perth offers almost all the culinary, entertainment, recreational, and cultural attractions one would expect in the capital of the country. Perth has an idyllic climate while having some stunning parklands, architectures, and beaches you’ll ever witness. There are many attractions you’ll discover in Perth including inner-city parks, science museums, and beaches.

Stay Connected
52,637FansLike
5,672FollowersFollow
829FollowersFollow
Previous articleClothes to Wear While Backpacking Around Australia
Next articleAustralian Passport your Gateway to the World