Top 5 Richest Cricketers in the World 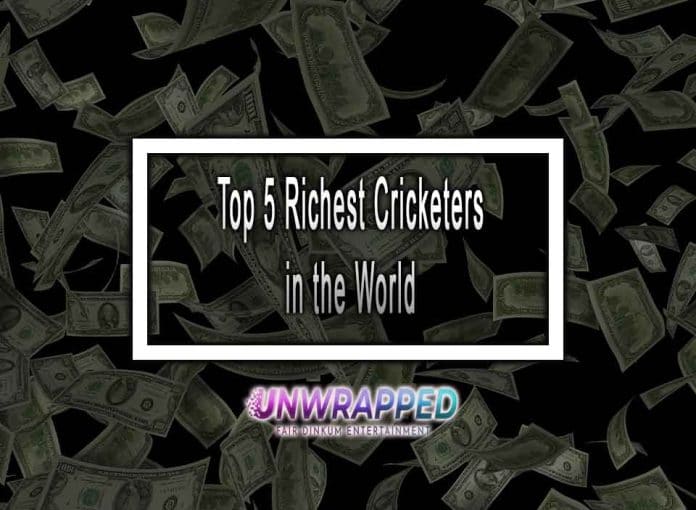 5 Richest Cricketers with Net Worth

All sorts of cricketing records are stopped by the God of Cricket, and this list is no exception. He holds the current top position among the richest cricketers in the world with a net worth of $170 million. BMW, Adidas, Phillips, Pepsi, Castrol, and many other recognizable and international brands are some of the brands he has worked for. In addition to his properties, he owns businesses worth 520 crores. Additionally, he is the first cricketer to earn 100 crores as a brand ambassador for MRF tires.

Mahendra Singh Dhoni (affectionately called MS Dhoni) is India’s most successful cricketer and former captain. He is both a wicketkeeper-batsman and a renowned personality in the sport. Skilful and calm in his approach, he is admired for everything he does.
His unbroken records include the most wicketkeeper catches and the most T20 wins. In addition to Reebok and TVS Motors, Red Bus, Sony Bravia, Lays, Amrapali, Snickers, GoDaddy, Colgate, Orient, Gulf Oil, and many others, MS Dhoni has endorsed almost every other brand you know.

Every other major brand wants to work with Virat Kohli, who is undoubtedly one of the greatest cricketers of all time. His Forbes citation reveals that he is this year’s richest Indian cricketer, and he is also the most marketable. It’s not surprising that Virat Kohli appears in every other TV ad with his net worth of over has established himself as a national icon through his determination and hard work, and that is why you can find him in almost every ad.

Among the top five most wealthy Australians, Ricky Ponting has a net worth of $65 million, making him the country’s most successful cricketer. Incredibly, Ricky Ponting has had an unbelievably successful cricketing career, winning three consecutive World Cups, two of them while captaining Australia, scoring 27,000 runs in his 560 international appearances for his country.

As one of the greatest cricketers in history, he possessed a classy and conventional batting style. With more than 21,000 runs in international cricket, he holds the record for the best score by an individual batter, as well as the second most runs scored in the history of the game. In addition to gaining fame and popularity internationally, he was the brand ambassador of MRF. The Chittagong Kings also endorsed his brand.

Who is richer Virat or Dhoni?

How Much Money Does MS Dhoni Earn? Opinions about Virat Kohli and MS Dhoni’s Brand Value. The current year’s brand value for Kohli is Rs 1,412 crore, and he stands first. The fifth spot went to Dhoni, whose value was Rs 464 crore.