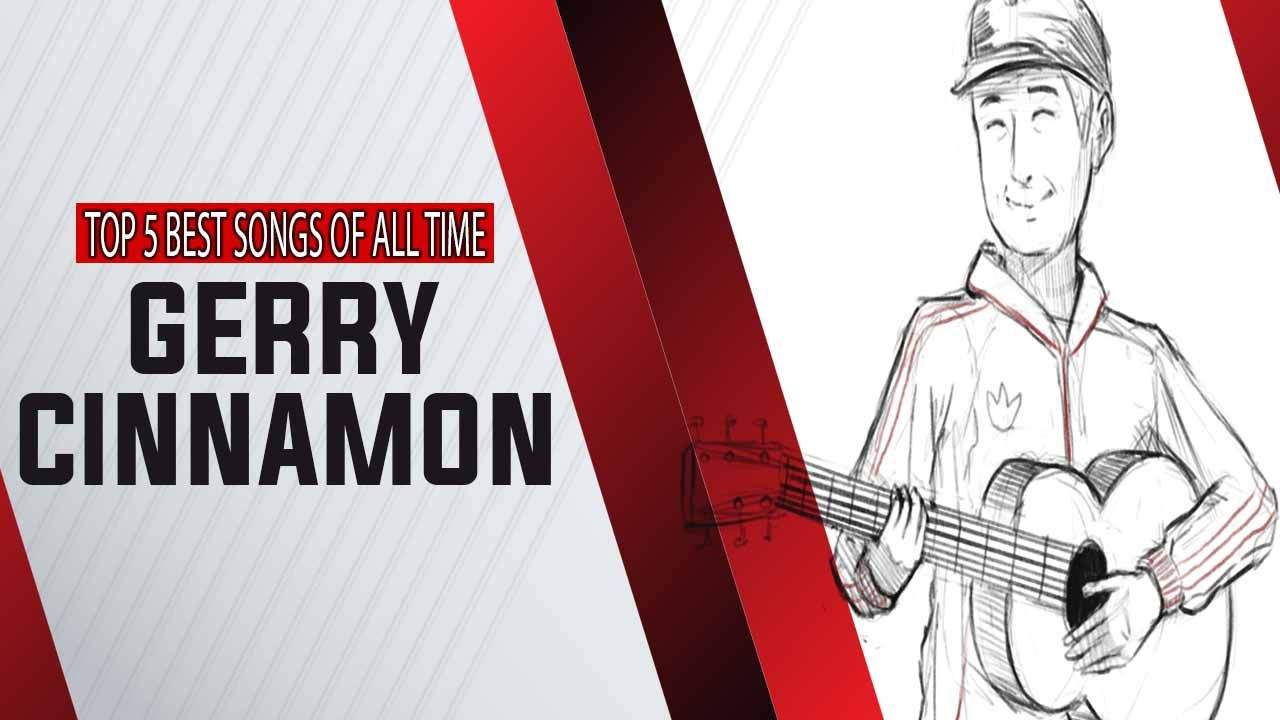 Gerard Crosbie (born 1 October 1984) is a Scottish singer-songwriter and acoustic guitarist popularly known by his stage name Gerry Cinnamon. If you’ve listened to the latest folk hits in 2021 you know the name and songs of Gerry Cinnamon. But which of his hit pop songs do you think is the best? Maybe you were singing strongly to ‘Belter’  or waving your Scottish flag to ‘Lullaby’  or your heart was beating to ‘Sometimes’? Whatever your favorite is, please let us know in the comments below.

Cinnamon has played at a myriad venues like Alexandra Palace, AO Arena, Belsonic Festival, Cardiff Castle, Hampden Park National Stadium, Resorts World Arena, and Shaky Knees Music Festival, among many others. Prominent and famous names in the music folklore world.  His main instrument is the guitar, and the dedicated genre being Folk/Rock. Now let us entice your music thrills with our top 5 best Gerry Cinnamon songs of all time.

Created with introspective lyrics detailing a hectic life full of fights and drinks, this #1 Gerry Cinnamon Song on Spotify gives us a story of a man living hard in a colorful urban life. With swiveling guitar tunes and soft chorus this song is one of the best known songs by Gerry Cinnamon.  Gerry published his first album, ‘Erratic Cinematic’ in 2017, which peaked at number 17 on the UK Albums Chart and featured the singles ‘Belter’ and ‘Sometimes.’ A few years after its debut, the album became a Silver-selling album, and Gerry hailed the achievement on Instagram, writing on the social media platform: “No bad for a DIY record that only went on sale last week. There is no label. There is no media. Not an issue. It’s just a group of folks that enjoy the music.”

The Song name “Sometimes” received awards from British Phonographic Industry (BPI) and was also given a platinum award.

This song has been played in different countries and throughout different radio stations. It’s peaked as number 1 on the radio stations playing at that time. Reputation of this song is increasing day by day and it’s won the heart of people and has become an all-time favorite song from Gerry’s music list.

Must Read: Gerry Cinnamon Songs Complete List – All His Songs

A song rife with self-referential lyrics, this emotional tune is one of the most requested Gerry Cinnamon songs at concerts. Its big ‘what if’ thematic and it rides along that line with lyrics denoting the virtue of hard work turned into success and the arid consequences of choosing the contrary. The importance of caring is displayed throughout the song and references to moments in life where right or wrong was chosen creating a big difference in the outcome of those decisions.

Gerry had a big hit with ‘Canter’ which peaked at number one in the Scottish charts. Gerry describes the song, which was released on June 22nd, 2019, as “an uplifting track.” from his second studio album named Bonny. Cinnamon stated in an interview with Radio X, “It’s a happy song.”

“It’s simply one of those songs where I attempt to sling information bombs. I was always looking for a piece of gold in a song, for a bit of wisdom when I was a little man, so I guess it’s just me talking to myself.”

Since its launch in April 2020, the official lyric video for ‘Canter’ has received over 7.2 million views on YouTube.

A love song that finds a great home in Gerry Cinnamon’s folk guitar style and deep lyrics. Details the glad remembrance of older and harder times and tops it off with a romantic tale in the present singing about a woman named as the “Sun Queen”. Maintains a thematic of the olden times referencing James Dean and “music from the 50s”. Its a song any lovebird will find themselves beating to happily.

‘Sun Queen’ was the second song released from Gerry’s second album Bonny. It was released by Little Runaway Productions on October 11, 2019. In Scotland, the song peaked at number two. The Sun Queen music video was released on YouTube on the tenth of October 2019.

4. Gerry Cinnamon  “Where We are Going”

‘Where we’re going’ is the sixth song on Gerry’s album ‘The Bonny,’ which came out two months later. A song that lets its lyrics carry the listener into a well composed sense of motion and takes him through a journey of emotions in a life of music and romance. Gerry released the new music on his social media accounts, along with a brief black and white video in which he tells his followers, ‘Where We’re Going,’ ‘Good night, Cheers x.’Gerry initially published an audio video to YouTube, which received millions of views, followed by a lyric video that included grainy black and white film.

Gerry Cinnamon’s album ‘The Bonny,’ which was published in November 2019, was a huge hit for the Scottish vocalist. Its a song about the beauty created from the result of trying and struggling. It encourages the spirit of having self-faith by “building the bonny”. Bonny is Scottish slang for beautiful. Presents a tale of the joy that comes from looking back at life with beauty in the steps that take us along to the present.

Gerry announced the new album on Instagram, writing, ‘New Album. The name is Bonny. It is now available. I hope you’re all safe and looking out for one another. When this is all finished, we’ll have a decent sing-song again. Much affection. ‘Thank you, x.’

Despite being in the midst of a lock-down at the time of its release, the record went to number one in the United Kingdom. ‘The Bonny’ is available in a variety of media in addition to the standard digital selections. Vinyl comes in four varieties: LP, CD, and cassette.

That’s it! Those are our top Gerry Cinnamon songs. There’s something for everyone here and your taste and feel for fork music is sure to be enhanced by the riveting lyrics and guitar tunes of the now world-famous Gerry Cinnamon.